Hugh Farmer: The SCMP of 19th Febuary 2014 included an article “Still ding-dinging after 100 years”. This stated that Hong Kong Tramways had celebrated its 110th anniversary the day before.

In fact this date marks the start of Hong Kong Tramways (HKT) celebration of its 110th Anniversary which will actually be on 30th July 2014.  Its website proudly announces that HKT is launching a series of events with the theme “Carrying our culture and life stories.” –which conveys the message that the trams do not only carry people every day, they carry the everyday stories of Hong Kong people. Celebrations kick off with local movies featuring tram scenes. 30 tramcars will be transformed into the Moving Film Library exhibiting tram-related classic movie stills. Moreover, the Whitty Street Tram Depot will be turned into an outdoor movie screening venue and showcases films starring the trams. 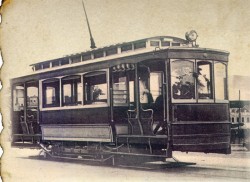 In this short article I am going to look at the earliest proposals concerning a tramway. And  then follow developments up to the official opening in 1904.

The Development of public transport in Hong Kong, PF Leed,s 1987

In 1881 two proposals were  made to construct a tramway along the northern shore of Hong Kong Island. The first was introduced by F Bulkely Johnson, who represented Jardine Matheson & Co, and another  on 16th June by Ng Choy (also known as Wu Ting Feng). Eventually the two parties cooperated and applied jointly to the Legislative Council for permission to:-
“construct a tramway of 3ft. 6 in. gauge, to be moved by animal, steam or any mechanical power, for the carriage of passengers,  their belongings, whether luggage, goods or passengers’ animals, provided that they did not exceed 16lb. in weight or one cubic  foot in volume”.

The route and fares were agreed but the proposal aroused considerable criticism and opposition. In particular it was suggested that the tramway would force all other means of transport off the already too narrow streets. It was also claimed that different classes would have to be established, as Europeans would not travel in the same trams as Chinese.

However, enthusiasm for the project began to grow and the bill sat in the Legislative Council for further consideration. It was finally passed on 19th April 1884.

Unfortunately though there now appeared to be general approval  the plans were abandoned due lack of financial support. However one section of the originally proposed scheme was supported and financed by  Alexander F Smith. This rather surprisingly was the Peak Tram which was a success from its inception in 1888.

It was not until 1893 that the idea of a tramway was seriously raised again when a group of Canadians offered to put up the capital. However, at that time the Government was in the process of major land reclamation, along with constructing new roads and decided that the trams would cause more congestion. The scheme was again abandoned.

On 29 August 1901 a new bill, the Second Tramway Bill was passed by the Legislative Council having been presented by J Dalziell after a detailed study. This was the Tramway Ordinance No. 10. There were many conditions and considerations to be  discussed but after twenty years a  tramway system for Hong Kong island would be permitted to operate between Shau Kei Wan and Kennedy Town.

In February 1902 The Hongkong Tramway Electric Company Ltd was formed in England and things were finally underway. Contracts were signed. Alfred Dickenson & Co were appointed consulting engineers and Dick, Kerr & Co Ltd were contracted to provide the tram equipment and track. 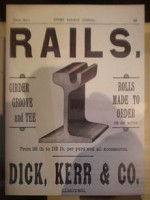 At 10am on 30 July 1904 the first electric tramcar left the depot, on Canal Road East (now Times Square) for the official opening.

The full service began on Saturday 13th August 1904 as noted by The Hongkong Daily Press. 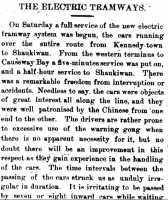 This article was first posted on 1st March 2014.