Elizabeth Ride has sent the following summation of BAAG reports about Tramway services from 1942 through to September 1944. 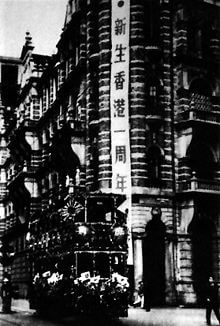 The Banner reads “One Year Anniversary of  New Born HK” Thanks to Chi Man Kwong for the translation.

The HONGKONG tramway, which was extensively damaged at certain points during hostilities, was partially restored on 27 January 1942 and a full service along the entire route was resumed on 20 March 1942.

It was reported in early 1943 that some cars had been shipped away. The number of passengers averaged about 100,000 daily.

In March 1944, the service was maintained between 0600 and 2330 hrs, but the electricity shortage necessitated a reduction of service, and in April 1944 it was reported that only one car was running every hour on each of the routes.

The service for the general public was entirely suspended in June 1944, and although for a time after this a few cars were still being operated in the mornings and evenings for the convenience of dockyard workers and Japanese schoolchildren, even these were believed to have been taken off subsequently.

A report received in September 1944 stated that the tram cars were being dismantled and shipped to Japan, and that 2electric generators belonging to the HONGKONG TRAMWAY Co. had also been removed.

The track was said to be in a bad state of repair, while the overhead wiring was also reported to be extensively damaged and could not be replaced. No recent information is available as to whether the line is still intact, or the number of cars actually remaining in HONGKONG, but it is known that the Japanese have stripped vehicles of metal parts.

The TRAMWAY co. workshop in RUSSELL Street is now used for the manufacture of arms and ammunition.