HF:  Chavalier R Pescio was a man with vision. Especially when it came to trams and tunnels in Hong Kong.

The Singapore Free Press and Mercantile Advertiser, 11 August 1909 contains this article which notes “rents in the Colony of Hongkong are abnormally so, more than in any part of the world in proportion to the accomodation offered”. Even then a complaint.

Pescio’s plan was to open up the south of Hong Kong island by “electric train.” This would have involved a tunnel under the Peak thereby linking Victoria and “distant parts of the Island within five or seven minutes” including Aberdeen.  At a total cost of HKD3.5m.

5 minutes? I reckon that’s Victoria (Central)  to Aberdeen non-stop at about 80kph – not exactly bullet train speeds but an electrifying  journey in a tram especially underground at any time. I wonder how the tunnel section would have been lit?

The linked Indhhk article below, Proposed Tramway linking Victoria and Aberdeen by Peak tunnel, 1906-1910, provides a map and details of the scheme.

Many thanks to Gina Fung for retyping the original newspaper article. 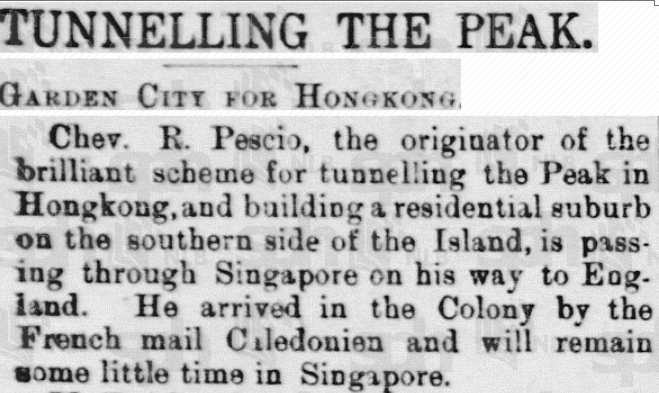 Chev. R. Pescio, the originator of the brilliant scheme for tunneling the Peak in Hongkong, and building a residential suburb on the southern side of the Island, is passing through Singapore on his way to England. He arrived in the Colony by the French mail Caledonien and will remain some little time in Singapore.

Mr Pescio, whom we interviewed at Raffles, tells us that he has every hope that, under the energetic and intelligent administration of Sir Frederick Lugard his scheme may come in for that amount of attention which would assure its being submitted to the Executive Council of the Colony with a view to a concession being granted to him to proceed with the works as soon as the necessary capital is subscribed in London.

The welfare of our Sister Colony further north is so connected with our own that we follow with interest what happens there, and, having obtained from Chev. Pescio details about his scheme, we are glad to be able, thanks to his kindness, to submit them in a concise form to our readers, and they may form as opinion an to the results which may be expected should the scheme be sanctioned by the Government.

The configuration of the Island of Hongkong is such that all available grounds on the lower part of Victoria having been built up, the extension of the city has perforce to take place on the hill immediately above. But, here again, through the military reservations, the limitations imposed by the P.W.D. on account of the water supply catchment areas, the distance from the terminus of the Peak Tramway, etc. little by, the most convenient spots have been used up and at the present moment there are very few sites indeed where houses can be built. The result of this state of things is that rents in the Colony of Hong-kong are abnormally high, more so than in any part of the world in proportion to the accommodation offered, and that, unless something is done as Chevalier Pescio advocates n his scheme, there is no hope that things will resume a more normal level. On the contrary, if nothing is done to cope with the requirements of the slow but steady increase in the population, at a very early date, when the Kowloon-Canton Railway will be completed and ultimately that between Canton and Hankow, the sister colony will be faced with an economical problem of great importance.

Chev. Pescio, who for several years has been resident of Hongkong, was struck by the possibility of opening up the southern part of the Island which, through being difficult of the Island which, through being difficult of access, had been ignored so far as a residential locality. A few houses, it is true, are to be found there, scattered about, but they are used only for week end accommodation and nobody lives there permanently. The Jubilee road built in commemoration of Queen Victoria’s Jubilee, from Victoria to the village of Aberdeen, round by West Point, does not in any way improve matters, nor to the present day has brought the southern slopes of the Island any nearer the business portion of Victoria, on account of its length and the difficulties of quick transit, so that the necessity was apparent if ever anything had to be done there, to tunnel the Peak, and by running an Electric Railway, bring the distant parts of the Island within five or seven minutes of the city of Victoria itself. To the study of the tunnel, the building of the railway and a certain number of modern residences, Chev. Pescio directed his attention.

His scheme, complete in every detail, was submitted to the then Governor Sir Mathew Nathan in 1906, but met with a resolute opposition at his hands, as his idea was to develop instead the New Territory. Undaunted, Chev. Pescio, on the departure of Sir Matthew submitted again his scheme to the then acting Governor, who also declined to take it into consideration, and matters would have remained at that had no Sir Frederick Lugard, the present Governor, with thet horoughness which characterises his administration taken the matter in hand energetically and, after mastering in a general way the broad features of the scheme had not promised Chev. Pescio to submit the matter to the consideration of the Executive Council.

The benefit to be derived should the scheme be allowed to be completed are so many that Chev. Pescio entertains no doubt as to the ultimate success of his endeavor to put the matter through. The Hongkong papers have duly discussed the matter and exposed their wonder at the backwardness of Government in granting a concession for a scheme in Government in granting a concession for a scheme in which Government would have had everything to gain and absolutely nothing to lose, and it is to be hoped that H.E. the Governor with his business capacity and the far insight he has acquired in the interests of the Colony, may be induced to cast his vote in favour of the project.

Chev. Pescio proposes then to tunnel the Peak, to run an electric railway through it to the other part of the Island, and to build a certain number of modern residences on the slope, the whole at a cost of about £300,000.

The scheme is referred to at length in a Hongkong paper. The cost is 3½ million dollars, and details include houses on the cooperative principle – the company building houses, 100 at first, five-roomed, seven-roomed and eight-roomed on the latest sanitary principles. An electric generating station is projected, and a sea-bathing establishment, with jetty &e.

The image on the Home Page of this article comes from Tramlines: The story of the Hong Kong tramway system, M Barnett, SCMP, 1984

This article was first posted on 6th December 2014.