IDJ writes – This excerpt comes from a very useful book published by the Hong Kong government’s Department of Commerce and Industry dated 1955. It is a typical 180 page government handout to prospective overseas buyers outlining where Hong Kong is in the world and what the colony can sell or make for you. Essentially a commercial buyer’s guide to Hong Kong, possibly published annually.

Can anyone provide further information about the history of their manufacture in Hong Kong, or specifically in the 1950s or when the last such hats were made here? 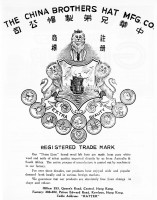 This advert from about 1955 is for “Three Lion” wool felt hats “made from pure white wool and noils [short strands and knots combed out of wool fibre] of select quality imported directly by us from Australia and South Africa. The entire process of manufacture is carried out by machines in our factory.” The factory was at 388-402 Prince Edward Road, Kowloon.

Felt is a non-woven textile that is produced by matting, condensing and pressing fibres together from wool, fur or synthetic fibres. It is produced in many different forms for industrial, technical, designer, craft applications and of course hats. The latter are relatively soft but some types of felt are tough enough to form construction materials. It can vary considerably in terms of fiber content, colour, size, thickness and density depending on its intended use. 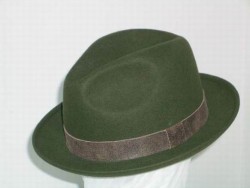 Felt has been used to produce headware for many centuries and is possibly the world’s oldest textile material. Archaeological evidence suggests that  from very early on, people discovered the tendency for fibres to mat together when warm and damp, many years before they learnt how to spin and weave yarn. Later, the “petasus” felt hat was made in ancient Rome. Until the 1920s all the operations necessary in making a hat were performed by hand but machinery was then introduced.

Felt hats are still made by Hong Kong companies though all the production centres appear to be in China.

Thanks to IDJ for sending the first image, felt hat advert and core information from 1955.