Tymon Mellor: In the 1870’s as Hong Kong, or more precisely the city of Victoria, expanded, it was a continual challenge to supply water to the growing population and new industries. Whilst the western portion of the city could utilise the new water supply from the new Pok Fu Lam reservoir, everything east of the “Clock Tower” in Pedder Street had to rely on existing streams and two smaller dams at Wong Nei Chung and Tai Hang.

In 1873, the Surveyor General J M Price, reported that with a population of 92,000 inhabitants, after excluding the garrison and the needs of shipping, the existing water supply was 26 litres/head (5.75 gallons a head) made up from:

It may have been called The Wong Nei Chung dam, but it was more of a weir, forming a small pool and allowing water to be extracted. The facility was providing water to the eastern portion of the city in 1873 and had probably been constructed around ten years earlier. As reported in 1892, the dam supplied raw water, that is untreated water to the east of Victoria and East Point (Causeway Bay) through a pipe line to the sugar refineries located on the coast line. During the summer of 1891 the residential properties were connected to a filtered water source from Tai Tam.

The location of the dam has never been formally identified. However, the 1901 Plan of the City of Victoria, indicates a dam and “Blue Pool” to the south of Wong Nei Chung village. The dam is at a level of 42mPD, suitable to supply water to the sea front, a distance of 2,000m. The road would subsequently be named after the pool. 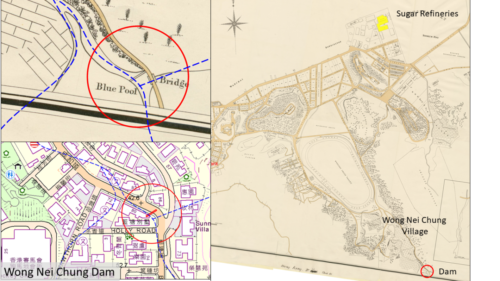 Later maps indicate other small dams on the river and in 1899 the Wong Nei Chung dam and reservoir were constructed at the head of the valley. The site of the intake and pool has been lost to development, located close to the junction of Holly Road and Blue Pool Road.

From the founding of the colony of Hong Kong, up until early in to the twentieth century, the currency of international trade was the Spanish Silver Dollar, or known locally as the Mexican Dollar. The coins were also known as “pieces of eight”, and were a tempting target for pirates attacking ships transporting the coins in bulk from manufacturers in Mexico to Spain.

The coin was approximately 38mm in diameter, weighing around 27 grams and was the international currency starting from around 1598 until early in the twentieth century. From 1825 the silver coinage was the official British currency for all of it colonies, and formally endorsed in Hong Kong on the 27th April, 1842, when the Governor, Sir H Pottinger declared that the “Mexican or other Republican dollars” be the standard for all trade, unless otherwise specified. It had a legal value of 4 shillings and 2 pence sterling and this would fluctuate depending on the quality of the coin and the trade situation. The silver dollar was eventually replaced in 1935 when the Hong Kong dollar, introduced in the 1860’s as a local currency was pegged to sterling, providing credibility and acceptance within the international community.

In 1856 the Governor Sir John Bowing proposed establishing a mint in the territory to issue silver Hong Kong dollars. After a number of delays, the ordinance to establish the Mint was approved on the 26th February, 1864 and the Mint was formally opened on the 7th May, 1866. The Mint employed steam engines to power the presses and furnaces, with water to be supplied from a new dam.

The Mint required a site 100m by 100m with good security and to be convenient for the movement of the silver bullion and minted coins. No suitable site existed in the city of Victoria, so it was decided to place it on new reclamation located in what is now Causeway Bay. A suitable water supply was identified from a stream originating from Mount Butler, with a dam to be constructed south of Tai Hang village. 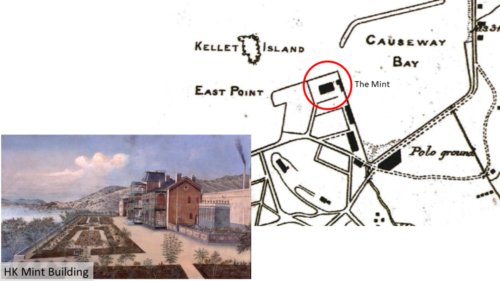 An invitation for the construction of the dam and supply pipework was issued in January, 1865 for construction and completion in 1866. The dam was set at a level of around 40mPD.

For many reasons, the new coin was not a success, and the Mint closed on the 26th April, 1866. The machinery was sold to the Japanese Government and the land sold to Jardine Matheson who erected a sugar refinery on the site. The water supply from the dam was integrated into the supply network, supplying the eastern portion of the city with around 50% of that from the Wong Nei Chung supply. By the summer of 1891 residential properties were connected to filtered water and the dam supplied the East Point Sugar Refineries and the stables in Causeway Bay.

The location of the dam is shown and named on the 1901 Plan of the City of Victoria. The actual location has been lost but would seem to be within the grounds of the Hong Kong True Light Middle School. 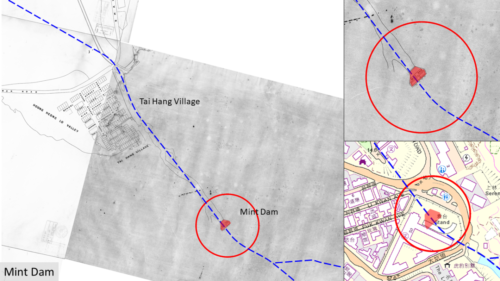 This supply, was one of the oldest on the Island. The gully and associated stream, originates from the Peak and originally discharged into the sea, at what is now Pedder Street. The stream has always been a key water supply for the island, and in 1855 a storage and distribution tank was installed to provide water to the local population. 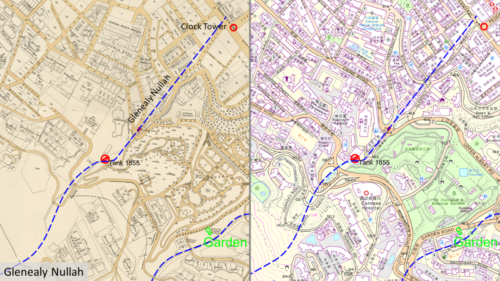 This article was first posted on 16th October 2018.