Water supply in HK – its history and past, current and potential future problems – SCMP article

Martin Williams wrote the article, Why Hong Kong shouldn’t take clean water for granted, which appeared in the Sunday Morning Post magazine on 24th April 2016. Martin had contacted our group while writing the article seeking information and post publication has kindly given permission to post extracts, a couple of his photos and to link the article. As has the Post’s Magazine editor.

The piece covers a lot of ground including a brief history of government water supply from a few wells dug by 1852 up to the construction of the largest reservoir in Hong Kong, High Island, inaugurated in 1978. Other reservoirs mentioned are Pok Fu Lam, Tai Tam, Aberdeen, Shing Mun and Plover Cove.

Martin mentions the periods when Hong Kong has experienced chronic water shortages. In particular the severe drought of 1929 that lead to 70,000 people leaving the colony. And those of 1963 and ’64 which led to violence at standpipes.

Betwen 70 and 80% of Hong Kong’s water comes in from the Donjiang (East River) in Guandong. There are current concerns regarding its continued availability and whether Hong Kong can become less dependent on this source and more self reliant widening the water catchment area and resurrecting the notion of a desalination plant.

A thread running through the article is about a visit Martin made to High Island reservoir and I thought this would be of particular interest. The article begins: Easily overlooked, Tower X, a concrete cylinder that’s perhaps as wide as a bus is long and mostly submerged, is topped by a concrete dome and narrow brim, shaped like a hat a Catholic priest might wear.

Usually, the tower – which is on the south shore of High Island Reservoir, east of Sai Kung town, and named after its designation on Water Supplies Department (WSD) maps – is off-limits to the public, but I’m visiting with a small WSD team that includes engineer Patrick Fan Kwok-ning. Entry is made along a footbridge and through two steel doors. Inside, we cross the concrete floor to the edge of a rectangular opening, where I lean on a metal railing and look down through the tower’s waterless interior. 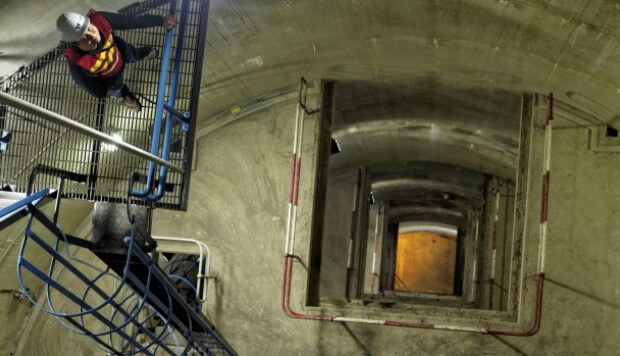 “It’s 60 metres to the bottom,” Fan says. Perhaps 60 metres doesn’t sound that many, but picture being 12 storeys or more up a building and looking down an empty lift shaft. There are lights below, yet even while leaning – cautiously – forward, I can’t clearly make out the base of the tower. Steep flights of metal steps lead down the side of the shaft, reaching a succession of floors on which there is little but massive water pipes – four in all, each 1.7 metres in diameter. These take water from the reservoir to a pipe leading through and around the hills to a pumping station near Tai Po Market, and from there to the network that supplies the thirsty city…

…After leaving Tower X Fan and his colleagues take me to High Island’s east dam…Through a door we enter a passageway so narrow, we walk in single file, then turn left, into the depths of the dam. Solar-powered fluorescent strips light our passage; at intervals there are short water pipes, about the width of my arm: measuring equipment can be fitted to these, to check whether there is internal leaking.

We turn left into a side room with bare concrete walls, ceiling and floor, and containing what looks like a squat oil barrel suspended on a metal frame, above a circular hole.

“This is the most important part of the dam,” says Fan. “It’s an inverted pendulum.”

While I think of pendulums as swinging to and fro, as in a grandfather clock or terrorising the protagonist of an Edgar Allan Poe story, this one is stationary. A wire runs from the middle of the barrel down to an anchor point within the hole. Within the barrel, it’s attached to a float suspended on oil. Tap the float, and it moves slightly, then returns to its place in the centre of the barrel. Should the dam become distorted, the float will move off centre, signalling a major problem… 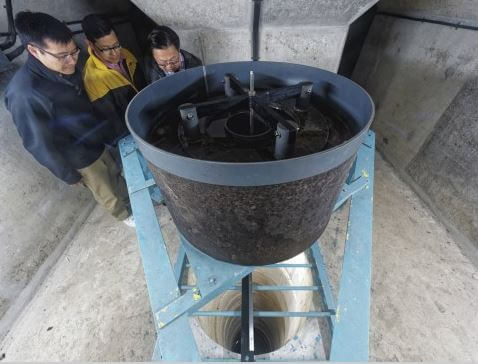 Related Indhhk articles:
The Index lists many articles about Hong Kong reservoirs.
It also has several about Lok On Pai “desalting” plant mentioned in Martin’s article.