Tung Hing Ling is one of the oldest and largest manufacturer of fire fighting equipment and provider of related installation services and maintenance in Hong Kong.

A native of Hoiping in Guangdong province, Tung Hing Lung founder Chan Din (陳典, 1906-1975) was an expert in machinery and worked for the Whampoa Dock for 5 years early in his career. He started Tung Hing Lung Engineering Works in 1930 on New Reclamation Street in Kowloon to provide shipbuilding, repairs and welding services. In 1952, Chan saw the demand for firefighting equipment in Hong Kong with the rapid industrial development and residential construction at the time and began manufacturing fire extinguishers, powder and other fire-fighting products such as hydrants and hose under the “Dragon” brand. Soon his firefighting products captured significant interest and Chan Din became a sought-after expert on firefighting, often being interviewed by the press on the topic. (WKYP, 1959-12-25)

At the 1955 HK Products Expo, Tung Hing Lung showcased two new products which they registered with the regulatory authorities in London – one for use on land and another for use at sea. Both products were 20 times more powerful than regular fire extinguishers with tanks that held 30 gallons of fire-fighting fluid, extra thick metal surface and a 50 feet long hose. To manufacture these products, Tung Hing Lung installed special machinery that could handle thousands of pounds of pressure. (TKP, 1955-12-24)

In 1967, the firm’s factory was listed at 55-57 Wing Hong Street on Castle Peak Road with several dozen technical experts on its staff. Aside from the local market, its products were also exported to Southeast Asia and the industrial market was a key segment of focus where the firm offered free demonstration to manufacturers. (WKYP, 1967-3-15) In 1969, the export manager of a British firefighting equipment firm with over a century of history visited Tung Hing Lung in Hong Kong.

In March 1971, Chan Din and his wife visited Taiwan for two weeks at the invitation of Chang Min-chang (張敏昌), the fire chief of Taipei during which he visited a leading local firefighting equipment manufacturer and exchanged ideas with the local fire departments. (WKYP, 1971-3-25) 1971 was a busy year in terms of firefighting in Hong Kong with a major fire in Sham Shui Po which destroyed four 3-story old buildings and the major fire of the Jumbo floating seafood restaurant in Aberdeen. Chan Din spoke to the press that year, giving firefighting tips to the Hong Kong public and also suggested folks who lived in newer buildings with fire extinguishers to keep them in designated spots instead of hiding them to prevent theft. (WKYP, 1971-11-10)  Around Christmas the same year, Mrs. Chan Din opened a fashion boutique by the name of 合合屋時裝 at Champagne Court in Tsim Sha Tsui.  (WKYP, 1971-12-23)

Outside of business, Chan Din was active in community service and had served as director of Po Leung Kuk, chairman of the Hoi Tin, Kwong Wah and Eastern athletic associations and the Kowloon Miniature Football Association. In December 1975, Chan Din passed away at the St Teresa Hospital in Kowloon at the age of 71. (KSEN, 1975-12-16) Shortly before Chan Din’s death in November 1975, Tung Hing Lung Fire Fighting Equipment & Engineering Co Ltd (東興隆機器消防工程有限公司) was incorporated.

Chan Din was succeeded at Tung Hing Lung by his second son Jackie Chan Chai-keung (陳濟強). Born in 1938, Jackie graduated from the Queen Elizabeth School in Hong Kong and earned his B.S. in civil engineering at the University of New South Wales in Australia in 1963. (WKYP, 1963-6-2) He first worked for the British civil engineering firm Scott Wilson Kirkpatrick in the 1960s, during which he worked on the Plover Cove Reservoir in Tai Po, the largest reservoir in Hong Kong by area and the world’s first freshwater coastal lake constructed from the arm of the ocean. Later, he formed Chan Chai Keung Architect & Engineer Co before joining Tung Hing Lung. Outside of business, Jackie had strong interest in politics and was elected to the Mongkok District Board in 1982 during the first district council election and served until 1994. He also served on the Legislative Council between 1985 and 1988. 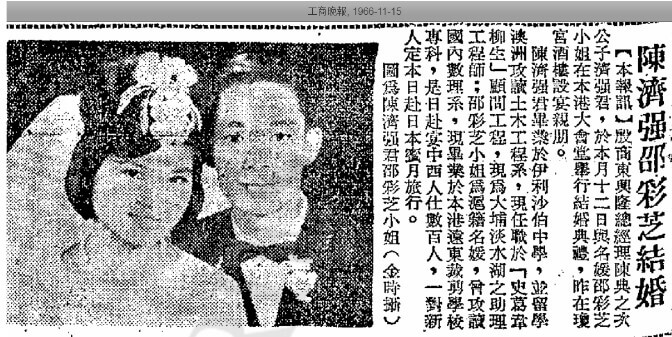 This article was first posted on 29th November 2019.