I thought it might be more useful if I gathered this information in one article, not least because it would hopefully be easier for anyone seeking information about APC employees to find online and for me to add employees as and when they pop up.

Not quite sure of the best format but will start with that below and adapt this if neccessary. All links are to Indhhk articles unless indicated otherwise.

If you wish to add a name to the list or provide details of those here please contact me, Hugh Farmer indhhk at gmail dot com

Babb, Walter George, Contributor: Carol Webster has been in touch asking if we have any information about her great grandfather, Walter George Babb.

Carol knows that at the time of the 1911 UK census he was working for the Asiatic Petroleum Company as a watchman and living at 42 Victoria Square, Portishead, Somerset, England. She asks if we have any records of the APC’s employees in the UK. I am afraid we don’t nor do we of those who worked for the company in China, Hong Kong or elsewhere. Asiatic Petroleum Company was a joint venture between the Shell and Royal Dutch oil companies founded in 1903, and again I don’t know if these companies maintained and kept records of APC employees.

Carol sent this update on 19th August 2019:
My knowledge of  Walter George Babb is still rather minimal I’m afraid.
He was my Gt. Grandfather born c1863 in Taunton St. Mary, I believe.
He married  Emily Anstice in August 1886  in St. Peters church Clifton Bristol.
He was also in the Merchant [Navy] Service on a ship called the Port Morant in 1901.

Information about the Port Morant
I am not sure when he was hired by the Asiatic Petroleum Company but he was there in the 1911 census.
He and his family lived at 42 Victoria Square in Portishead.
He was buried there in Portishead on  December 20, 1928  at the cemetery, Grave # E93.Walter George Babb, Employee of the Asiatic Petroleum Co, UK, 1911 – information wanted

Bousfield, J.K., Contributor: IDJ was in touch on 2nd September 2019 – Came across this photocopy from SCMP microfilm yesterday. No idea of his job description, but as he travelling to the UK with his wife by air in 1936 he must have been high up in APC’s hierarchy. 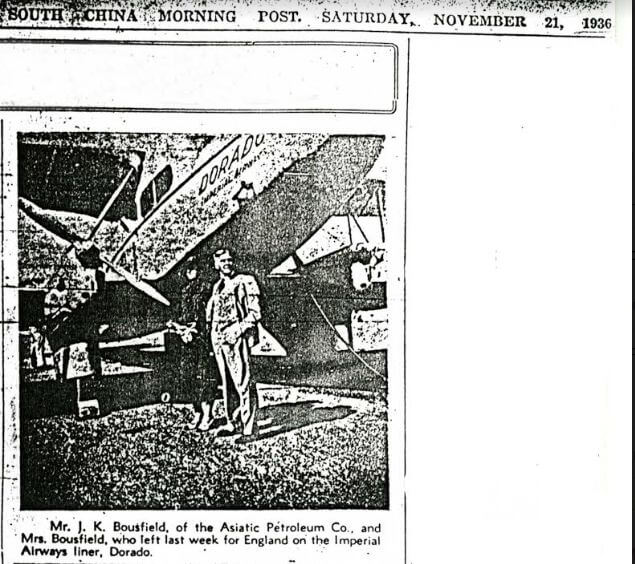 Gammell, Edward, Contributor: Ian Brown who sent this newspaper article which mentions Edward Gammell, son of Sir Sydney Gammell. Edward it says was office manager of the Asiatic Petroleum Company in Canton around the time the article was published i.e. mid-1942. 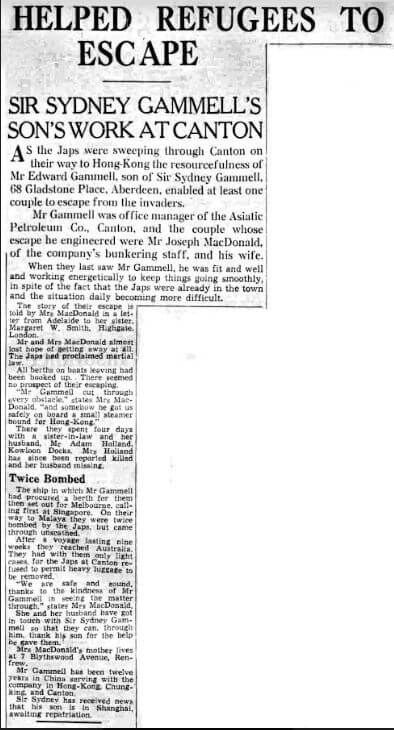 This image of Edward Gammell accompanied the article above.

Kitto, John ‘Jack’,  Contributor: Hong Kong based Nicholas Kitto has a family connection to APC. On his website he writes, “my Grandfather, John ‘Jack’ Kitto, was recruited directly from school by Royal Dutch Shell in 1910. After training in their London office he travelled to Shanghai on the Trans-Siberian Railway and commenced work with The Asiatic Petroleum Company (North China) Limited on 16 September 1912. He remained with APC in various locations in China until his retirement in 1939.”
Asiatic Petroleum Company, China – family connections

Nick sent this update on 19th August 2019:
Re Grandpa Jack … I have his various postings with APC (North China) but these amount to little more than a list of five or so locations.  I’ll forward your recent post on APC to a handful of others with family connections to APC.

MacDonald, Joe, Contributor: Ian Brown has been in touch. His father’s cousin Joe MacDonald worked for the Asiatic Petroleum Company pre WW2. Ian writes,” the Shanghai base [of APC] seems to ring a bell for me when I recall my father talking about Joe MacDonald’s time in China which I feel was not necessarily that long, curtailed by the war. I have a record of him sailing on the Corfu for Hong Kong in November 1937, he married Lizzie Smith in September 1937, he married late at the age of 43.”
HF: From the dates provided, it seems highly likely that Joe and Jack would have known each other.
Asiatic Petroleum Company, China – family connections

This undated photo, sent by Ian, shows Joe on the right and a colleague at a work site, location and date unknown. 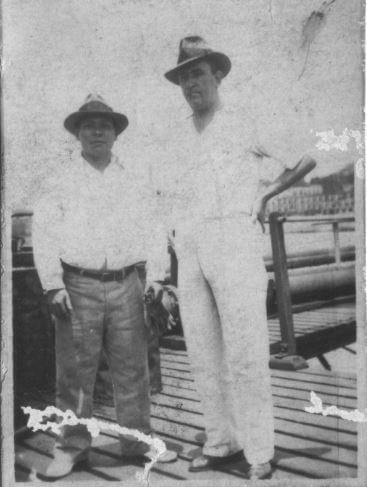 I’ve got an interesting article re the Macdonalds exit from China to Australia, they got quite a bit of assistance from the office manager Edward Gammell of Asiatic Petroleum.
This article appeared in the Aberdeen Weekly Journal.

Many thanks to IDJ for extracting and magnifying the individual article.

The article says that Joseph MacDonald was part of the APC’s “bunkering staff.”

Bunkering is the supplying of fuel for use by ships, and includes the shipboard logistics of loading fuel and distributing it among available bunker tanks.

The term originated in the days of steamships, when the fuel, coal, was stored in bunkers.[1] Nowadays the term bunker is generally applied to the storage of petroleum products in tanks, and the practice and business of refueling ships. Bunkering operations are located at seaports, and they include the storage of “bunker” (ship) fuels and the provision of the fuel to vessels. (1)

Pratt, Gerald Spencer, Contributor: Gerard Molyneux: Looking for information about Gerald Spencer Pratt, who worked for this company from circa 1923, returning to England on the Empress of Scotland, arriving at Liverpool 12th February 1947 from Kure Japan.

Wilkinson, Edward Edelson, Contributor: Audrey Gregg The photograph below comes courtesy of the Historical Photographs of China collection, University of Bristol, UK and shows Asiatic Petroleum Company staff, at the A.P.C. depot in Shanghai in the 1930s. The image is indicated as being copyright of Audrey Gregg. Information attached to the image suggests the man marked with an x in ink is “Pop i.e. Edward Edelson Wilkinson).” The “Pop” suggests either a friendly nickname or possibly that Wilkinson was Audrey’s father.
The collection provides the following information regarding use of the images, “Our aim is to help make this virtual photographic archive of modern China publicly available, without cost, and with limited restriction on use for non-commercial purposes.” However, I will try to contact the Collection and/or Audrey Gregg.
Asiatic Petroleum Company staff photo, Shanghai 1930s 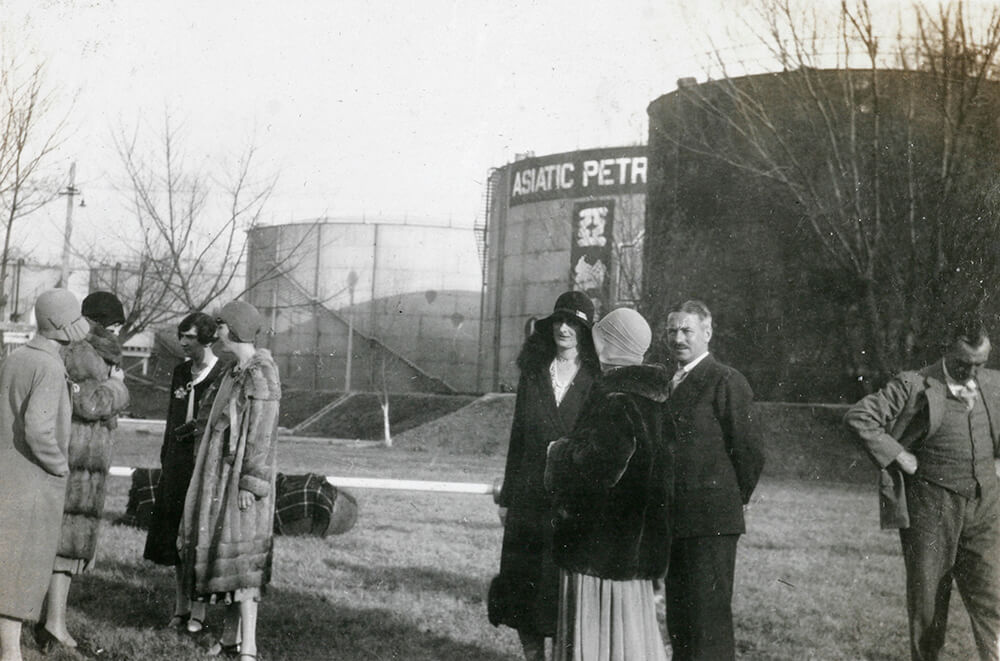 The  above image was kindly sent by Jamie Carstairs, Project Manager, Historical Photographs of China, Special Collections, University of Bristol, UK, A second version identifies two of the people shown. Fourth from right is Ethal Wilkinson and second from right is Edward Edelson Wilkinson, who worked for the Asiatic Petroleum Company in the 1930s. 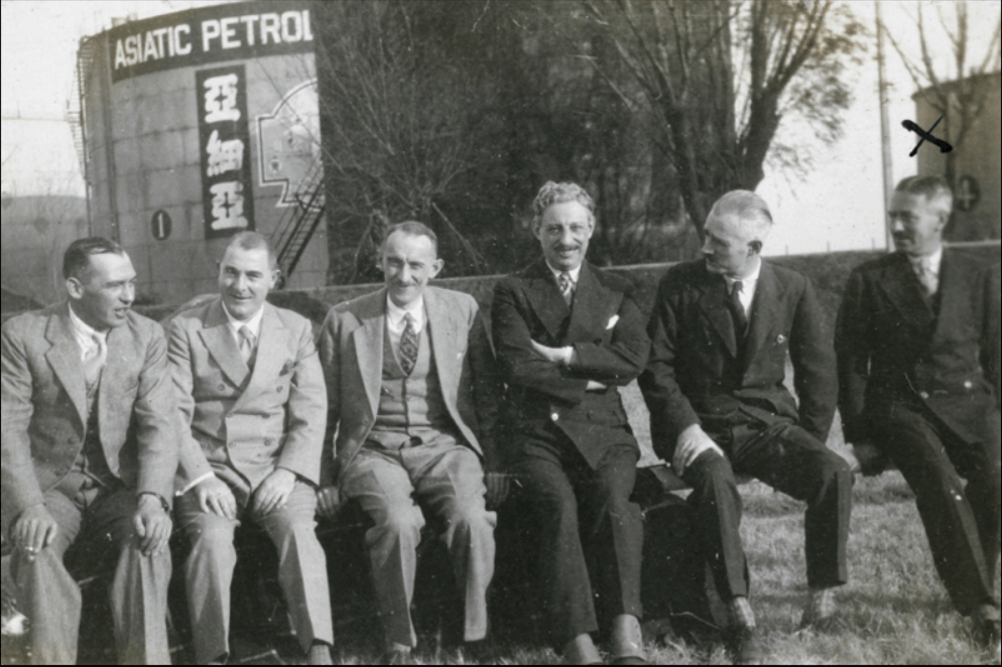 This article was first posted on 18th August 2019.