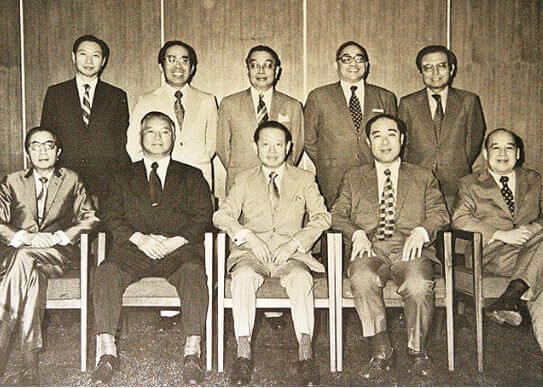 Stanley Kuo (second from the left, back row) and his in-law H.C. Tang (second from right, front row) with fellow directors of the HK Cotton Spinners Association

Stanley joined his family’s aluminum business in Shanghai at an early age and was factory manager of Wah Chong Metal Works when it was established in HK in 1950. US immigration records showed that he studied at North Carolina State College in the late 1940s.  He became a director of the Chinese Manufacturers Association and in April 1958, he led a delegation of HK manufacturers including Freezinhot, Dah Chung Industrial and Union Shirt Manufactory (see articles) to participate in the International Expo in Seattle. (KSDN, 1958-7-24)

Stanley Kuo was involved in the Hong Kong chapter of Junior Chamber International (JCI, also known as Jaycee), which was formed in 1950. Through the JCI, Kuo befriended real estate scion J.S. Lee (利榮森,1915-2007) of Lee Hysan Estate, printing executive Alex S.C. Wu (吳樹熾, 1920-2005) and insurance executive Kenneth Chun (陳其海) – all three of whom had served as president of JCI HK (Lee in 1951-52; Wu in 1960 and Chun in 1957-58). The four were keen on starting a business together and when the U.S. credit card pioneer Diners Club looked for a local franchisee in Hong Kong, they seized the opportunity and formed Diners Club (HK) Ltd in 1959 with Lee as chairman and Alex Wu in charge of day to day operations as managing director.

Diners Club, the first credit card company in the world, was founded in New York in 1950 by Frank McNamara and his attorney Ralph Schneider and his friend department store heir Alfred Bloomingdale. Allegedly McNamara came up with the idea of a charge card after he forgot to bring his wallet during a dinner with clients at a restaurant. Starting with 27 participating restaurants and 200 cardmembers, the firm grew rapidly through franchising across the globe and by the mid-1960s had over 1.3 million cardholders. 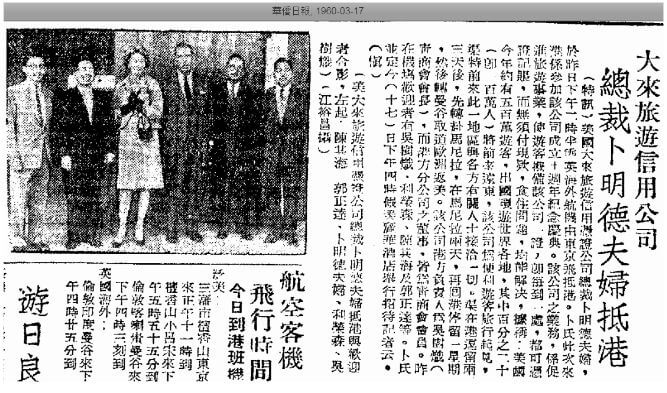 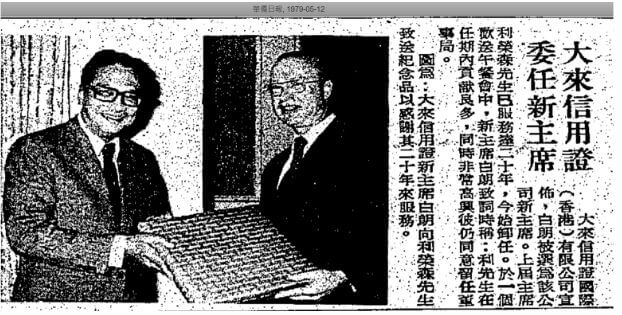 Bill Brown of Standard Chartered (right) presenting a souvenir to J.S. Lee (left) who was stepping down as chairman of Diners Club (HK) in 1979 after two decades (WKYP, 1979-5-12)

In Hong Kong, the business was not an overnight success as the concept of credit cards was brand new at the time and most merchants did not accept the cards at first, rendering the cards useless. Membership started at a few dozen and only ramped up to 130 by 1961. But Kuo and his business partners kept at it and the business eventually took off as consumers began to see it as a status symbol and merchants also warmed to the concept, creating a network effect. By the late 1970s, Diners Club franchise in Hong Kong was a success and was absorbed by Standard Chartered Bank who took a 49% stake in the venture. Citibank acquired Diners Club International in 1981 and acquired the Diners Club HK business from StanChart in 1985. Today, it is hard to imagine Hong Kong residents without credit cards and it all started with Kuo’s Diners Club venture with his friends 60 years ago.

Left: Article about the opening reception of Gunzetal in 1973 at the Peninsula Hotel (WKYP, 1973-4-13); Middle: Gunzetal Building in HK; Right: ad announcing the appointment of Intraco as sole agent for Gunzetal in Singapore in 1977 (Straits Times, 1977-4-11)

The same year Diners Club HK was established, Stanley Kuo entered the burgeoning textile industry and incorporated Woodard Textile Manufacturing Ltd in August 1959 to produce cotton yarn. That year alone, there were around 8 cotton spinning mills being constructed in Hong Kong, mostly by industrialists of Shanghainese descent, who were attracted by the profits in the industry.

Woodard built a large 3 story plant at 19-31 Ma Tau Pa Road in Tsuen Wan in 1960 and the mill as of 1970 had 12880 spindles and 178 looms, making them one of the medium size players in the industry comparable in size to Pao Hsing and Textile Corporation of HK covered earlier in other articles but relative small compare to the giants in the space such as South Sea and Nan Fung. (Asian Industrial Development News, 1970)

Woodard manufactured the “Thunder Bird” brand of yarn and Frank Tsao Wen-king (曹文錦, 1925-2019), the Shanghainese shipping tycoon and founder of IMC Group, was listed as one of its directors. In the late 1960s, Woodard began working with Japanese partners and expanding into Southeast Asia. In 1968, Woodard partnered up with two Japanese firms – trading giant Mitsui and textile giant Nichibo (one of the big three in Japan with 700,000 spindles at the time, renamed Unitika in 1969 after it merged with Nippon Rayon; in 1962 the firm partnered with Woodard director Frank Tsao to establish Malaysia’s first textile mill Textile Corporation of Malaya) to form Singapore Spinners Ltd, a cotton spinning mill in Jurong in Singapore starting with 6000 spindles and 150 workers and monthly production of 300,000 lbs of cotton yarn.  (Straits Times, 1968-8-7) By 1988, Singapore Spinners, which by then specialized in making polyester yarn for threads was producing 1.44 million kg of yarn per year with 180 workers and was spending S$10 million on a new building and equipment to increase capacity by 60% to 2.3 million kg per year. (Business Times, 1988-4-27)

In 1972, Woodard established Gunzetal in Hong Kong to manufacture 100% spun polyester sewing threads in partnership with Gunze, a leading Japanese manufacturer of industrial thread and the TAL Group, the HK textile and garment industry pioneer founded by fellow Shanghainese industrialist C.C. Lee which was at the time an affiliate of the Japanese textile and fiber giant Toray Industries. The new firm was capitalized at HK$3 million with Gunze owning 40% while Woodard and TAL each held 30%. (Business Japan, 1973). Woodard’s partnership with TAL and Toray also extended to Southeast Asia and in 1973, Woodard Textile Mills Sdn Bhd was established in the Penang Free Trade Zone. Eventually Toray took full control of Woodard Penang and the mill is now known as Penfabric Mill 1.

Gunze, which is also known for its brand of innerwear, traced its origins to the Gunze Silk Manufacturing founded in 1896 but began making nylon industrial threads in Japan in 1954. By the early 1970s, HK and Southeast Asia had become the center of garment production thanks to lower cost and setting up Gunzetal in HK was a way for Gunze to be close to its customers and stay competitive while for Kuo it was a way leverage Japanese technology to deliver a differentiated product. Gunzetal built a 13 story, 200,000 sq ft factory on the 60,000 sq ft site next to the original Woodard mill in HK and started production at 1 million pounds per month. In 1974, Gunzetal and Woodard installed a Philips P855M system to handle inventory control, billing, payroll and production schedules. (Computers and People, June 1974)

By the early 1980s, Gunzetal under the management of Stanley Kuo was the largest manufacturer of synthetic yarn thread in Asia, supplying over 60% of garment factories in Hong Kong and had eclipsed the Woodard business, which shifted from cotton yarn to synthetic yarn. While the HK garment industry was facing challenges with a dozen factories closing in 1981 alone, Gunzetal invested in technology and product development to keep itself in the cutting edge, installing computers to enhance production yield and quality and launching higher quality thread products. As a result, clients were willing to pay premium for its quality threads. (WKYP, 1982-3-2)

In October 1979, Stanley Kuo was part of a delegation of 26 HK industrialists led by his in-law H.C. Tang (唐翔千, 1923-2018) which visited Shanghai for 11 days. From the late 1980s onwards, the Kuo family expanded their operations in the mainland and established the Shanghai Huachang Spinning Mill (上海華昌紗線廠) through a joint venture between their Thread International (國際線廠, incorporated in 1984) and the state-owned Shanghai No. 7 Cotton Mill (上海第七棉纺廠) in 1989 with total initial investments of US$7.6 million and 20160 spindles. This was followed by the establishment of Gunzetal (Shanghai) Ltd in 1993 and Guangzhou Gunzetal Ltd in 1998. Today, Gunzetal has annual production capacity of more than 6000 tons of yarn and 4000 tons of sewing thread and over 1500 employees. In 2018, the firm began construction of a new factory in Binh Duong in southern Vietnam.

Aside from the Jaycees, Kuo was involved in several organizations outside of work such as the American Club, the HK Cotton Spinners Association and New Asia College, which joined with two other colleges to form the Chinese University of Hong Kong (CUHK) in 1963. In 1976, CUHK instituted a reorganization which removed the academic independence of New Asia and as a result, Kuo along with 8 fellow members of the board of New Asia College including the founder and noted historian Chien Mu (錢穆) and fellow industrialist K.L. Hsu of Diaward (to be covered) and Jerry H.T. Liu (see article on Unitex) resigned in protest.

Stanley Kuo and his wife Carmen Yang (楊曼影) has one son and two daughters, all of whom are involved in Gunzetal and Woodard. His son Stanford Kuo (郭大熾), who is currently chairman of the HK Cotton Spinners Association, joined the family business in 1982 after graduation from MIT as manager of Woodard and became managing director of Gunzetal in 1986. His eldest daughter Lisa Kuo (郭妤淺) is the wife of Henry Tang as discussed earlier while his second daughter Gloria Kuo (郭瀛芷) married Kingsley Liu, son of diamond tycoon Casey Liu (see article).

This article was first posted on 17th February 2020.