HF: A visit on 6th Feb 2014 to the Hong Kong Museum of History led to the following information about The Hongkong Cotton-Spinning, Weaving and Dyeing Company Ltd 1898 -1914. 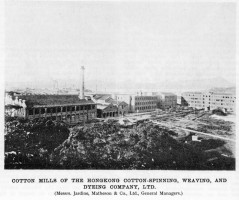 This was the first major cotton spinning company in Hong Kong and was formed in 1898 by Messrs. Jardine, Matheson & Co Ltd. (see article below).

A photograph of the works at the Museum stated that it was “built” by  Leigh and Orange Ltd, Engineers. Leigh and Orange were, and are,  primarily architects so I’m not sure if “built” means designed, constructed or both. And the term “Engineers” seems misleading. I shall contact the firm to see if they can confirm their involvement.

I can find very little about early projects from 1874 up to 1898 when The Hongkong Cotton-Spinning, Weaving and Dyeing Company Ltd was built. Later projects included the Dairy Farm Deport (1892) which currently houses the Fringe Club and the FCC, the Old Mental Hospital (1892) in Sai Ying Pun and the Queen’s Building (1899).

No mention of the HK Cotton-Spinning Company. However around this period the firm ” designed go-downs, warehouses, docks and the Star Ferry wharves critical components of the central city in the days when those zones were generally waterfront industrial in use.”

A direct link between the two companies would be very useful.

This article was first posted on 7th February 2014.