The article The Hongkong Cotton-Spinning, Weaving and Dyeing Company about the  first major cotton spinning company in Hong Kong formed in 1898 by Messrs. Jardine, Matheson & Co Ltd. mentions Platts of Oldham in the UK

The relevant extract from the article states “There are 170 carding machines, 21 sets of drawing frames, 21 sets of slubbing frames, and 30 intermediate frames, to mention but some of the departments. The whole of the machinery is by Platts, of Oldham, and of the latest and most improved pattern known in the industries. It is perfect in its action, and adjusted with such nicety that even children may be entrusted with some of the operations.”

Here are some details about Platt Brothers & Co around the production period of the HK Company, and its final years late 1960s to 1982.

In 1879 Platts reached its highest recorded levels of power loom production and its export of spinning machines. The Platt Company was the largest employer in Oldham and the largest maker of cotton-processing machinery in Lancashire and hence in the world. It became the largest textile machine makers in the world employing over 15,000 people, twice the size of their nearest rivals, Dobson and Barlow in Bolton and Asa Lees and Co, also of Oldham.

By the end of the 19th century, Platts were the largest engineering firm in the world, employing 15,000 workers.

Platt Brothers also supplied plans for mills as well as machinery and fitters to construct the machines, both at home and abroad. 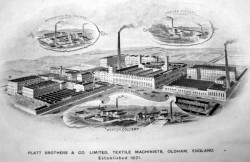 Later history of the company.During the late 1960s the company recognised that textile technology was in a state of rapid change, and the previous clear cut divisions between the processing of different raw materials had largely vanished. Also it was not logical for the constituent companies to operate separately – the multiplicity of units, R&D, manufacturing, marketing and sales needed rationalisation; in consequence a new company was formed in 1970, Platt International.

HF On 14 Jan 2014  Maryann Soper, Editorial Team, Grace’s Guide, replied to an enquiry I had made asking for more information connecting the HK Cotton-Spinning Company and Platt Brothers:
We have a good amount of company history for Platt Brothers of Oldham, and although I cannot see any purchase details to obtain an absolute date for this machinery I can confirm that they predominantly provided spinning machinery for the export market and in 1879 Platts reached its highest recorded levels of power loom production and it’s export of spinning machines.