Carles Brasó Broggi: Regarding Hugh Farmer’s request for details about Nanyang Cotton Mill, let me add some information about this firm.

The following text appeared in “Hong Kong Textile Annual” published by the Hong Kong Cotton Merchants Association in 1956 (pp. 46-47). It gives an insight into the company and the mill proving two hypotheses suggested in previous posts by Hugh and Amelia Allsop: that the mill was built on lot No. 1094 and that the company had a strong relationship with the knitting business: 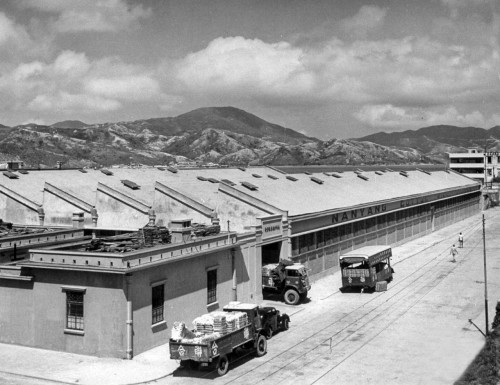 “The factory site of the Nanyang Cotton Mill Limited, situated on Kowloon Inland lots Nos. 1094 and 1992 Ma Tau Kok Road at Hunghom, covers an area of round about 286,000 square feet. Equipped with up-to-date machinery, it is the only mill in the colony which has adopted a vertical combine of spinning, weaving and dyeing”.

“The foundations of the Mill were laid in November 1947. By April 1948 partial production was attained and, in August of the same year, an installation of 15,000 spindles was operating at full production. Today the number of spindles in operation reached 30,000.” 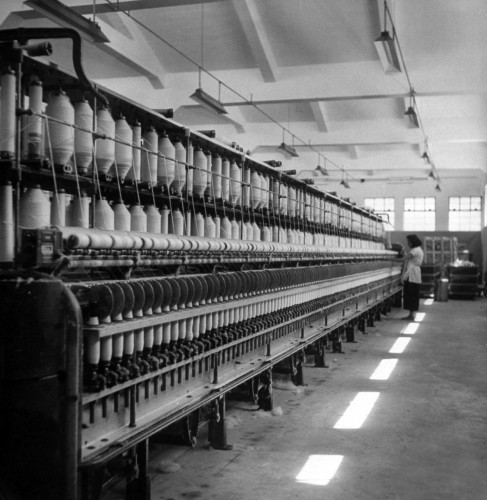 “In recent years, Combing Machines after the latest British model were installed, so that the Mill is well equipped for the production of quality yarns ranging from 10’s to 60’s counts, spun from raw cotton, staple fibre, or blends of cloth. The Nanyang Cotton Mill is one of the very few mills in Hongkong specialising in the production of fine yarns, and is an important source of supply to the local knitting factories”.

“About 80% of the production of yarns are absorbed by local weaving and knitting factories. The remainder is exported to South Korea, Burma, the Philipinnes, and other South East asian markets.”

“Of the 1,000 workers employed at the mill, about three-fourths are engaged in the Spinning processes, and the remainder in the Weaving shed. The rates of wages earned by individuals range from $4.00 to $14.00 per day. The living quarters provided by the Company, free of cost, accommodate about 80 per centof the total number of workers. In addition, the Company subsidises meals and furnishes a certain amount of work clothing.”

“The Board of Directors, with the approval of the shareholders have already apportioned 400,000 of the Company’s shares for sale to the public through the members of the Hong Kong Stock Exchange”

I also attach two pictures of Nanyang (taken from the Company’s Annuary Records, published in the 1970s, which are available in Hong Kong University Library): the first is a general view of the general office and worker’s domitories; the second is a photo of the workers dining hall. I also attach a scanned copy of the page about Nanyang, with the name and the founders (Y. C. Wang and H. C. Yung). This last scan copy appeared in the book “The 40 years of the Hong Kong Cotton Spinning Industry Association”, published in 1988 by the Hong Kong Cotton Spinning Industry Association. (p. 40). 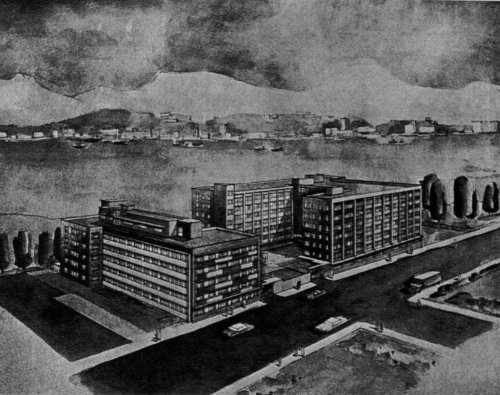 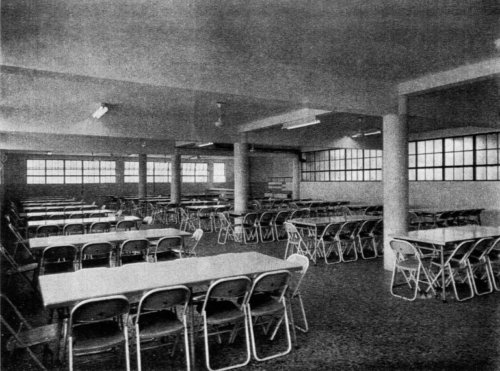 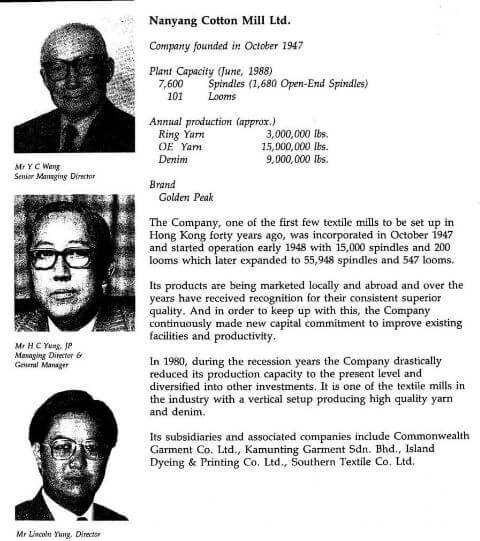 HF: This additional information comes from Carles’ Indhhk article, Shanghai Spinners: Pioneers of Hong Kong’s industrialization, 1947-1955, linked below:
… Y. C. Wang (Wang Yuncheng), grandson of Rong Zongjing registered with his relative H. C. Yung (Rong Hongqing) a company called Nanyang Cotton Mills Limited (南洋纱厂有限公司) and opened the first vertically integrated mill capable of spinning, weaving and dyeing in Kowloon (Ma Tau Kok Road in Hunghom,  on the seafront). The company was in search  of more capital and found an enduring partner in Lord Lawrence Kadoorie, who became Chairman of the board of directors from 1948 until his death, in 1993.

This article was first posted on 17th December 2013.