Tymon Mellor: The supply of fresh drinking water to the residents of Hong Kong has always been a challenge, not because the territory is particularly short of water, but because the continuously fast-growing demand has always out stripped supply. The first attempts to address this conundrum were taken in the 1860’s with the construction of the first water supply reservoir at Po Fu Lam. This article reviews the construction of the dam and the associated infrastructure.

With a sub-tropical climate, Hong Kong is not short of naturally occurring freshwater, as every year the average rainfall varies from 1.4m at Ping Chau to 3m on Tai Mo Shan. As described in Hong Kong Almanack of 1848, “Victoria is plentifully supplied with water from streams (of which there are not less than seven) that flow unceasingly from the mountains throughout the year: springs of soft water are also obtained by digging to the depth of a dozen feet, even within as many feet from high water mark”. 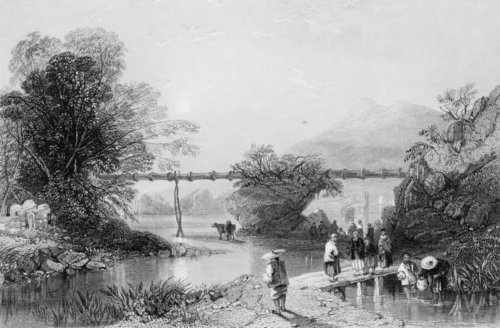 Water was used for drinking, washing, flushing drains and irrigating the fields. An article published in 1843 described the use of a bamboo aqueduct; “Habitual industry has so far tutored the mind of every Chinaman, that this barren rock which lends shelter and ornament to the landscape, is made still further useful as the pillar for sustaining a simple aqueduct, by which water is conveyed across the gorge, and employed in the irrigation of a distant arid plain, which otherwise would have been doomed to eternal sterility”.
With a population of around 7,000 in 1841, 2,000 of whom lived on boats, the territory had sufficient water supplies to accommodate their needs, along with the needs of the boats in the harbour. The residents were mostly fisherman, farmers and quarry men, and the streams provided sufficient water for the needs of the entire population.
With the colonisation of Hong Kong in 1841 by the British, came the development of commerce and industry, and the demand for water grew as the population increased, primarily along the north shore of Hong Kong Island which was known as the city of Victoria. Within ten years, the population had grown to nearly 33,000 inhabitants, an annual growth of 16%,and water was not only in short supply but it was also polluted, leading to out breaks of dysentery and other communicable diseases. 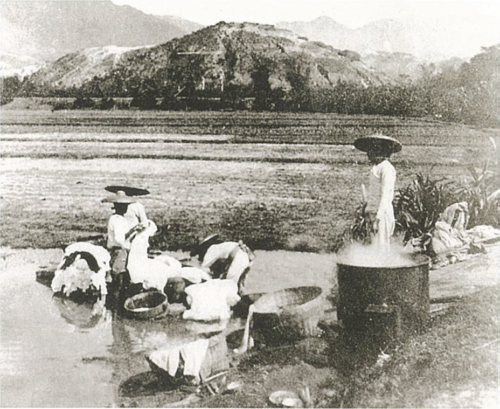 By 1851, the residence had constructed small weirs on the streams above the urban areas to supply a rudimentary piped distribution network. The system was already over whelmed, and as mitigation, the Government sunk five wells at a cost of £52 to supplement the supply, and in 1855 this was complimented with two water tanks to provide storage capacity. Looking at the 1859 map, two tanks are identified adjacent to streams in the location of Caine Road/Seymour Road junction and Robinson Road/Conduit Road junction. 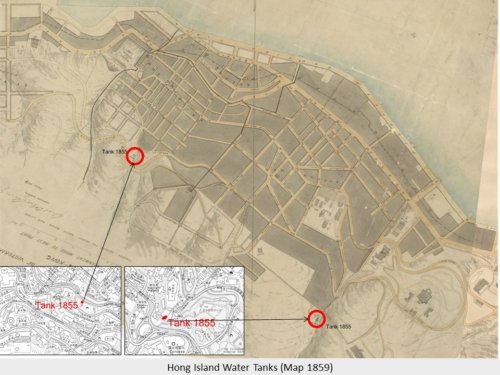 In 1858, the provision of a new waterworks was repeatedly mooted, and the Colonial Secretary, Mr W T Mercer, wanted to divert funds from the Praya reclamation scheme to the provision of a public water supply. He noted that there was a shortage of hill streams on the northern side of the Island resulting in a shortage during the winter season, resulting in “conflagrations” between the Chinese houses. He suggested a catch water system, starting at Pokfulam which collected water from all the streams it crossed as it surrounded the urban area. The scheme was estimated to cost £25,000.

The Governor, Sir John Bowring was of the opinion that it was not the business of the Government to provide water to individuals, any more than other necessities of life. He suggested the formation of a publicly listed company be implemented to undertake the work, noting the problems the Government may encounter trying to collect a water rate from the local population.

When the new Governor, Sir Hercules Robinson, arrived in September, 1859 he immediately took up the issue of water supply with vigour. On the 15th October, 1859 he announced a competition for the best plan to address the water shortage, with a prize of $1,000 or £210. Proposals were submitted by Mr S G Bird, Mr J Walker and Mr S B Rawling for consideration. Mr Rawling, a civilian clerk of works with the Royal Engineers, proposed in his report dated 29th February, 1860 the following scheme:

The proposal was developed on the basis of a population of 49,880 land-based inhabitants and 14,701 boat-based residents. Based on an assumed daily water usage of 68 litres (15 gallons) per head, the system would support the current demand and up to a population of 60,000.

The estimated cost for the scheme was:

A committee recommended adopting Mr Rawling’s scheme, but with one change; the dam was to be replaced with a weir suitable for an intake, reducing the reservoir capacity to 9,100 m3 (2,000,000 gallons) and the cost down to £22,700.

With the passing of an Ordinance (12 of 1860), namely the Water Supply Ordinance, on the 10th July, 1860 the Government had approval to spend £30,000 of revenue on the construction of the “Victoria Water Works”, and to impose a “Water Rate” of 2% per annum on the gross annual value of the property. If the project was to run over budget, the difference would be made up by mortgaging the water rate.

On the 8th December, 1860 the Government called for tenders in the Gazette for the construction of the works.

Work on the new reservoir commenced under the supervision of Mr Rawling with all the materials being ordered from England. A 36m wide, 3m high weir was constructed across the valley with a top level of 140mPD (460 feet). The weir intercepted the river that provided the water for the famous Waterfall Bay, the previous source of much of the water. The weir was vertical on the upside and sloping on the down side of the stream, made of concrete and faced with granite. Through the middle was a culvert, 1m by 0.6m to allow the reservoir to be emptied. During periods of flood, water would flow over the top of the weir. The ground was excavated to allow the dam to be constructed on a solid rock bed, cut to level for the foundation, providing a good seal. However, water did leak from around the culvert. 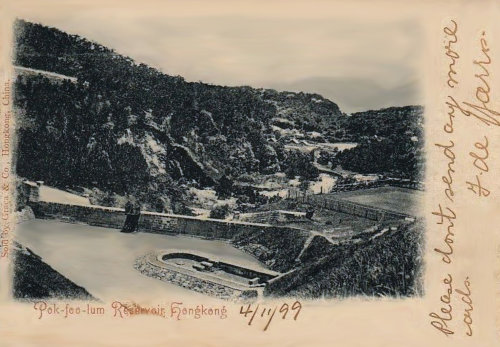 Construction of the dam commenced in 1861 and should have been completed the following year, but it over ran on budget and cost. During construction, a number of changes were made including, utilising imported cement for the concrete in place of locally produced lime mortar. The out-turn cost increased to £35,700 when the dam opened in 1863.

Although a great initial success, the limitations of the system soon became apparent. The smaller reservoir capacity was unable to support the water needs of the growing population during the dry season. Following a drought in the winter of 1865 and the subsequent water shortages, it became clear that a new water source was required. The acting Governor, William Thomas Mercer implemented a number of measures to relieve the situation, including limiting the use of the water for domestic purposes and proposed to use sea water for flushing the drains.

With the appointment of the new Governor Sir Richard Graves MacDonnell in March, 1866 discussion on a long-term solution began once more. The Governor wanted a large new reservoir to address the shortfall, but his advisors considered the geography of Hong Kong unsuitable or that the suitable locations were too remote for a large reservoir. 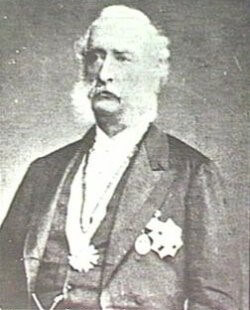 On the 27th August, 1866 the Governor wrote to the Secretary of State for the Colonies, the Earl of Carnarvon requesting approval to construct a new and larger dam at Pok Fu Lam. He noted that the existing reservoir only had capacity for a day and a half, thus use in the dry season was being restricted to 1,854m3/day (408,000 gallons per day) or an equivalent of 13 litres (2.9 gallons) per head. The Governor wished the works to commence on the 1st November, 1866 following the summer rains, and any delay; “might be a very serious matter and I believe would be a source of much disappointment to the Public, who are very anxious for an improved water supply, a matter of primary necessity in this climate”.

The Surveyor General, Mr W Wilson prepared a design for the dam along with a cost estimate for a 454,600m3 (100,000,000 gallon) reservoir, providing 3,182 m3/day (700,000 gallons/day) from a 222 hectares (550 acre) catchment. The new reservoir would be impounded behind a 15m (50ft) high embankment, located above the initial weir. The latter would form a small gauging basin to control the water discharge into the existing 250mm supply main, with a bye-wash or spillway on the east side. 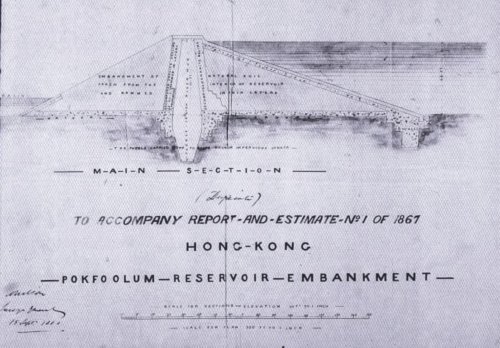 The embankment was to be formed on natural rock covered with a bed of concrete, to provide a strong foundation. On this, Canton river mud was compacted to form an impermeable core of the dam, protected by decomposed granite mixed with lime to form a weak concrete, surrounded with fill material. The top side of the dam was to be faced with granite blocks, pointed with oil putty. All the materials were to be carried and placed by “coolie” labour. The scheme was estimated to cost £21,000. 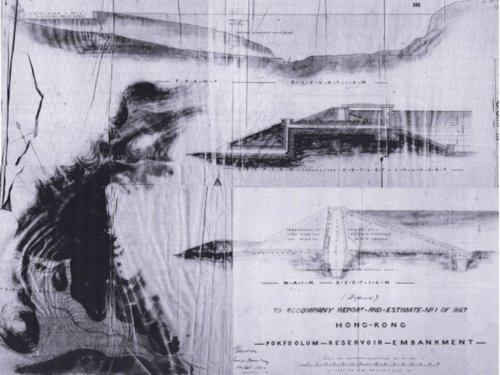 When the scheme was published, there was heated discussion amongst the colonists, as there was a view that the scheme was unnecessarily large and ambitious and too costly for the small Colony. The scheme was reduced in size to 300,000m3 (66 million gallons) with a catchment area of 172 hectares. The original proposal indicates there was a second higher reservoir, and it was probably this that was deleted from the final arrangement. Various contemporary reports quote capacities for the reservoir at 68 and 74 million gallons, but the actual capacity was recorded to be 300,000m3 in a 1937 report. The storage volume has since been reduced and WSD now reports a capacity of 233,000m3.

The construction of the dam commenced in November 1866, under the supervision of Mr Rawling and was completed by 1871. Along with two small dams of a stream crossing Pok Fu Lam Road, the cost of the project more than doubled to £48,300. 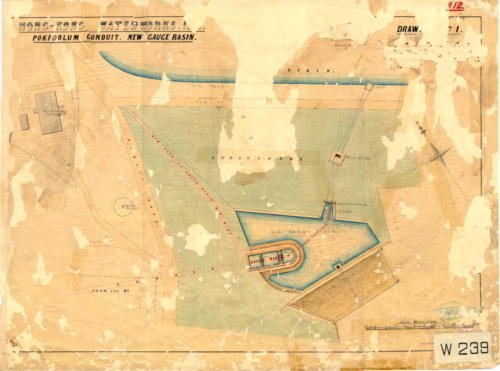 Further additions were also made to the supply network with the construction of intake works at Wong Nei Chung (£171) and Tai Hang (£388) streams, along with the associated pipework to feed the eastern portions of the city. 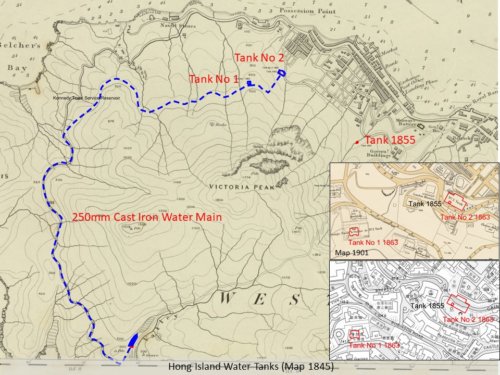 As the city expanded up the hillside, it became apparent that the small supply from the Glenealy Ravine was insufficient for those situated above Tank No. 1, a proposal was developed to bring water from Pok Fu Lam by conduit to supply the higher level. In 1873, the Surveyor General, Mr J M Price reviewed the situation and proposed, a conduit from the new Pok Fu Lam Reservoir gauging basin along the 150m contour (500 feet) to the existing water tanks.

The daily allowance provided by the reservoir was 20 litres/head (4.5 gallons per head) and the new conduit would not have improved this during the dry season, but would allow greater discharge in the rainy season and avoided water bring discharged to the sea. The estimate for the works was:

The works also required the construction of a rock tunnel from the gauging basin through the adjacent hillside. This was to become Hong Kong’s first of many infrastructure tunnels. 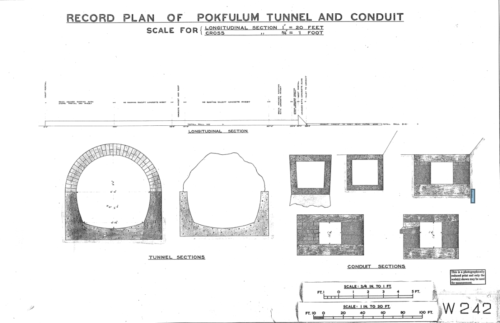 A tender was issued in May, 1876 and work began within the year, and was completed the following year in 1877 at a cost of £13,038. The original 250mm water main within Pok Fu Lam Road was removed.

By 1885 with a growing population of 110,000 and a need to supply industry, irrigation and flushing water, the current arrangement was still insufficient. A new water source was required. 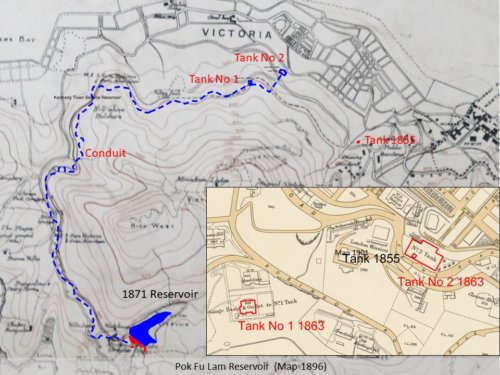 This article was first posted on 24th October 2018.