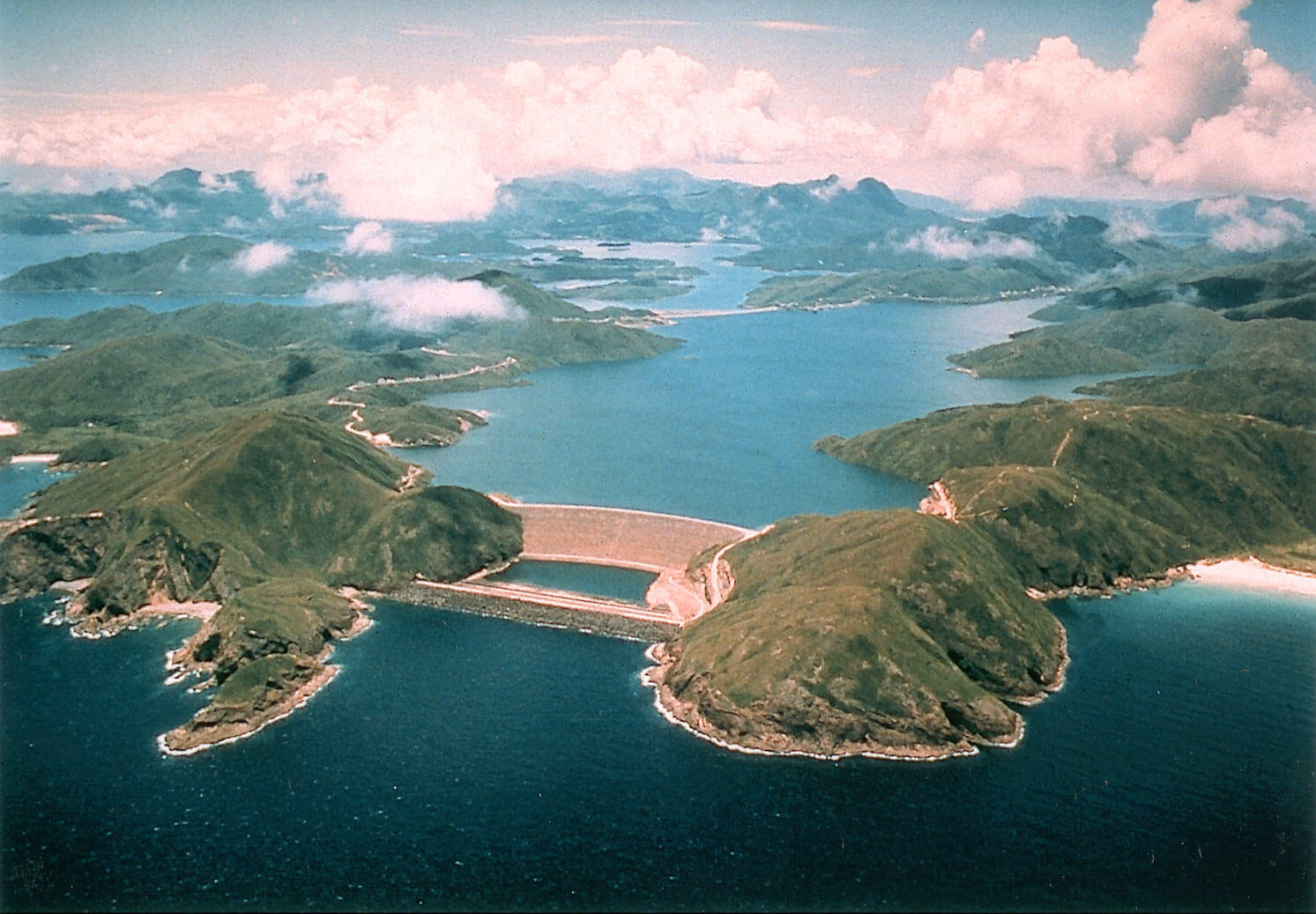 Consultants: The reservoir was designed by Binnie & Partners as a part of the High Island Water Scheme  which included pipeworks and other supporting infrastructure as well as the reservoir itself.

Contractor: Rico Lee  – According to the text on the dolo-shaped memorial at the East main dam to those fallen in the course of the project, the general contractor (which erected the memorial) is Vianini S.p.A. Roma.

Inauguration: Rico Lee – Regarding the inauguration date of the project, it was around late-1978 or early-1979. The memorial stone on the project completion, now lying at the centre of the turnaround at the southeast end of the West main dam is dated 27 November 1978.

Catching rainfall and carrying it to and from the reservoir, to eventually reach everyone’s home, required engineers to carve an astounding 40 kilometers tunnel through high rock, form 12 kilometers of catchwater channels, lay 13 kilometers of pipelines, build 9 pumping stations, construct 55 kilometers of roads and extend a treatment works. The system now catches and stores the rain from an area of 70 square kilometers over Sai Kung, Ma On Shan and Sha Tin.(1)

Two roads were created as part of the scheme, crossing over the dams.

Shui Keng Teng forms a large island within the reservoir.

Two large rock-filled dams (110 and 103 metres high) were completed in 1979. These closed the narrow strait between the mainland and the formerly separate High Island, and sea water was pumped out. The orginal catchment was too small (15 square kms), thus 40 kms of tunnels were built to divert fresh water to the reservoir, effectively adding 61 square kms to the drainage basin. Today the reservoir holds 281 million cubic metres of water, and when at full capacity, the surface stands 61.5 metres above sea level. To protect…the reservoir from storm waves, 7,000 concrete dolos ( an Afrikaans word for a sheep knuckle) were placed against a coffer dam that was originally used construction.
Material for dam construction were derived from two sites on the north side of the reservoir. Scars are still visible today. One quarry is located on the island of Shui Keng Teng and the other lies close to the main dam. Both were excavated into columnar-jointed tuffs which would not form blocks larger than 1.2 metres in diameter. Because this was too small for the outing facing of the dams, granite was imported from quarries at Turret Hill, in Sha Tin. Quarrying also took place at Nam Fung Shan, on the northwestern side of Long Harbour. (4)

It is worth mentioning that of all the memorial stones on the inauguration of major water schemes in Hong Kong I have encountered in person (Tai Tam Tuk, Shing Mun, Tai Lam, Plover Cove. High Island), the one for the High Island scheme is the only instance that there is an English AND Chinese text. 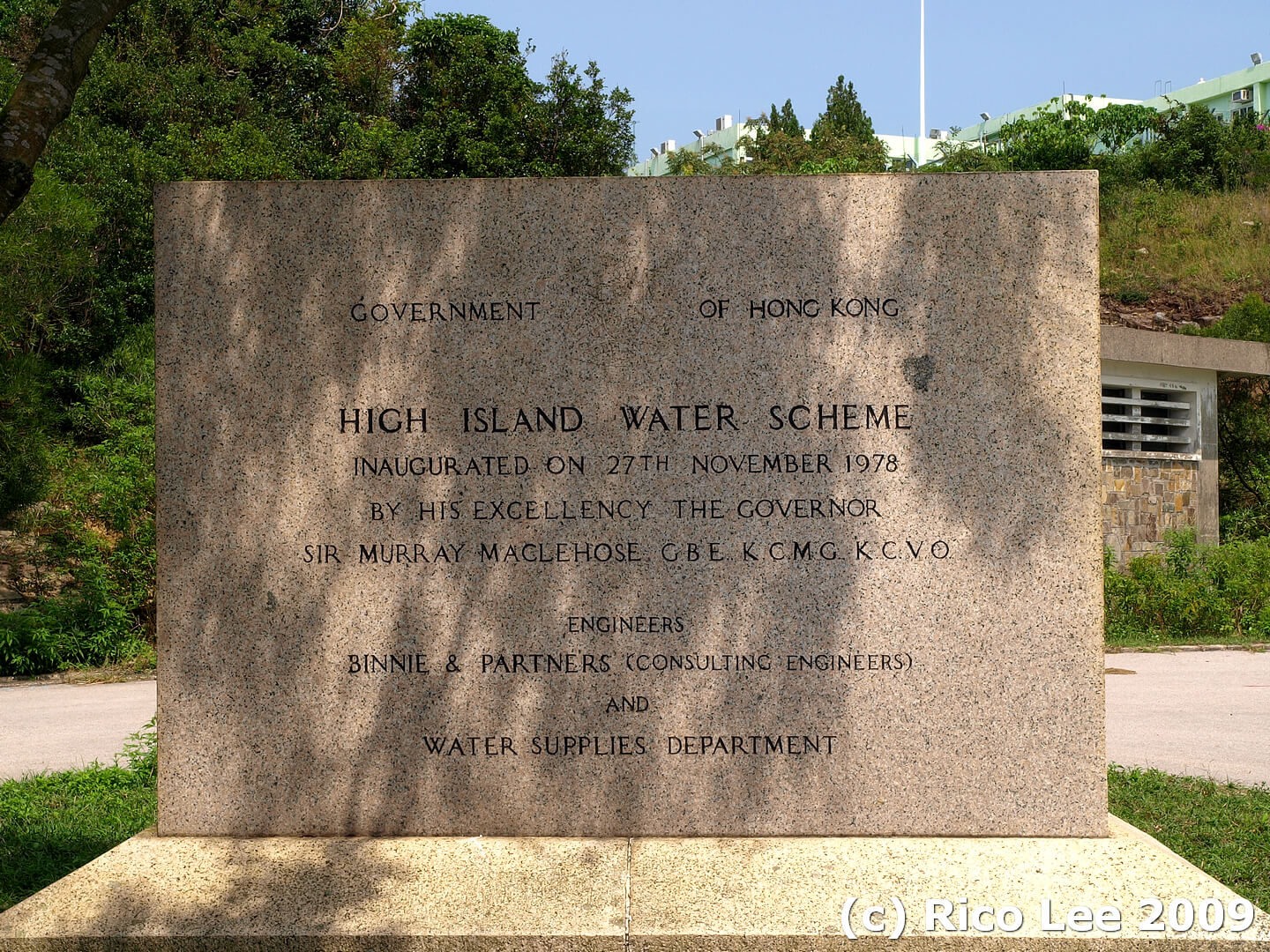 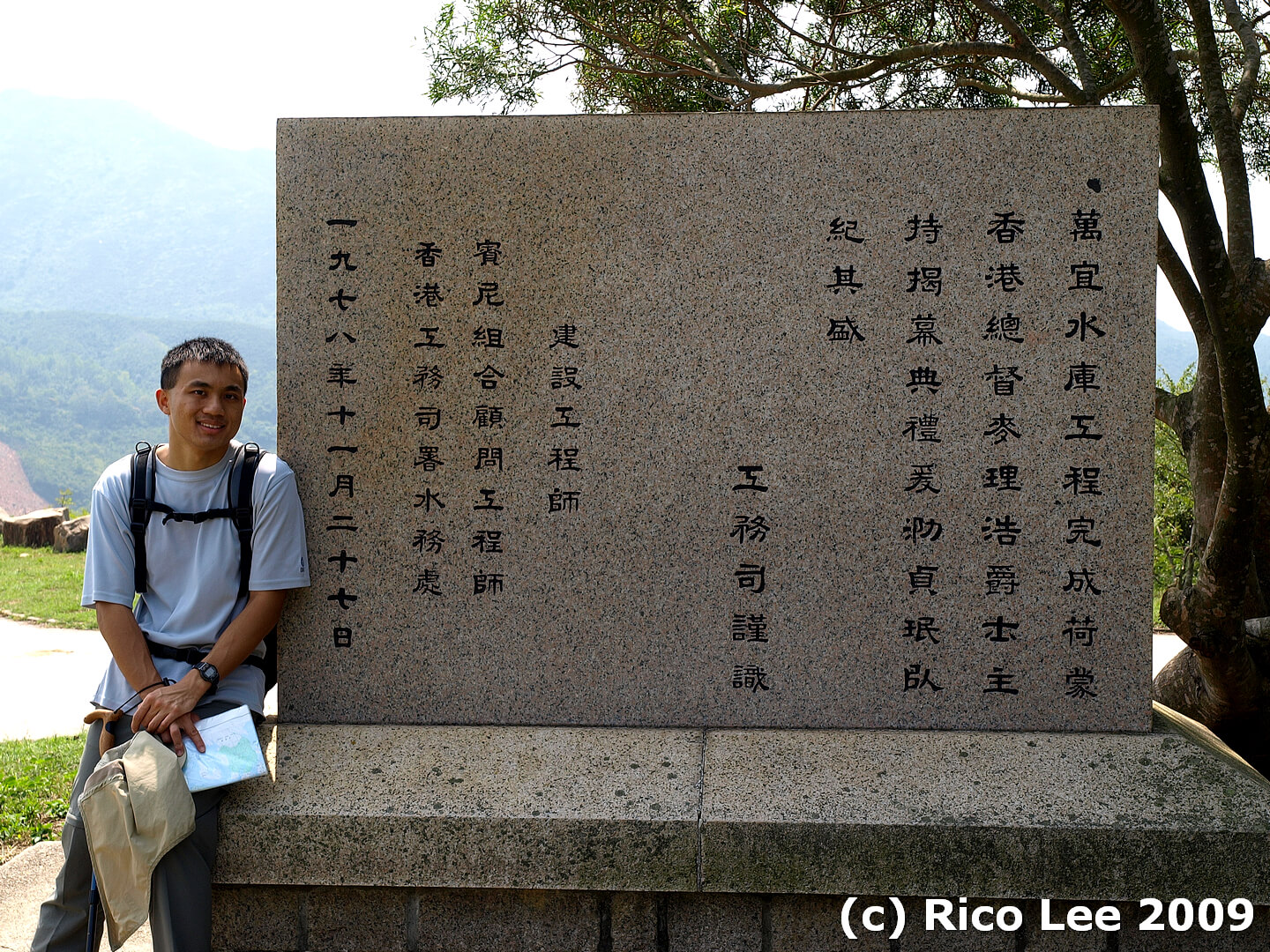 Elizabeth Ride: The following information has been extracted from Hong Kong Annual Reports.

From 1977.  “Work progressed satisfactorily at High Island Reservoir in the New Territories.  Leakage trough the permeable zone of the east sea cofferdam was brought under control by grouting and the construction of a temporary earth bund between the cofferdam and the main dam.  This earth bund enabled dewatering of the main dam foundation, so permitting foundation preparation to proceed prior to complete sealing of the leakage through the cofferdam.  It is estimated that the cost of carrying out these additional measures will result in a delay of 14 months in completion of the reservoir works.”
1978.   “Work progressed satisfactorily at High Island Reservoir in the New Territories.  Construction of the east dam core and the supporting rockfill reached a height of 54 metres above principal datum, and the west dam was built to its final elevation.  All eight lowland pumping stations were commissioned.  The main tunnel system also was commissioned and the yield from the associated intakes began contributing to total resources in June.  The uprating of filters at Sha Tin treatment works from 0.8 to 1.1 million cubic metres a day was completed and the plant commissioned.  Work on constructing a 96,000 cubic metre service reservoir at Lion Rock was substantially completed.”
1979.   “At High Island Reservoir, which has a capacity of 273 million cubic metres, construction of the east dam was completed by June, thus bringing the reservoir basin to its full height.  All other works were substantially completed and the project was officially opened by the Governor on November 27.”
1981.   “On February 9, 1980, Her Royal Highness Princess Alexander officiated at a ceremony to mark the start of pumping into supply from the High Island Reservoir.”
This article was first posted on 1st April 2015.