The article Needle Hill Tungsten Mine, published in Newsletter 7, states that the deposits were discovered by G.B. Gifford Hull in 1935 while working on the construction of the Jubilee Reservoir (now Shing Mun).

Dan Waters would like to add, “in 1956 Resident Engineer Gordon Gifford Hull kindly invited us lecturers at the old Technical College (now ugraded to Poly U) to visit the Shing Mun Reservoir and he spent some time in showing us around. He must have been over 70 at the time and it soon became apparent he was possessed of a rather ‘short fuse’. No doubt at that age he can be excused. He was very kind to us.

He arrived in Hong Kong in 1932 from Singapore to take up a new appointment with Messrs. Binnie and Partners as Chief Resident Engineer on the Shing Mun reservoir dams. On this assignment he was given complete authority on both expenditure and construction. This was hailed as as a revolutionary decision which worked so well that the whole project was completed 15 months ahead of time and HKD1.5 million was returned unspent. “At least in one case,” in Hull’s own words, “a Colonial Government waived its rules to meet a special and unusual need.”

His name is inscribed on the memorial stone at the reservoir which was begun in 1933 and finished in 1937. 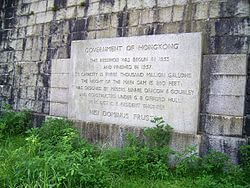 Hull was later involved in the construction of Tai Lam Chung reservoir which opened in 1957.

The Carl Smith collection includes a note from the SCMP that on September 16th 1969 he was cremated at Cape Collinson, Hong Kong and that there was a service at St Johns Cathedral. The SCMP concludes that he was, “a distinguished engineer”.

Petal Pilley adds: Gordon was my great grandfather – his daughter Lolita was my beloved grandmother. She was conceived in a village of same name in Ecuador! Gordon and Dorothy (who was known to us all as Gingie) had three other children namely Denise, John G and David. All are now deceased.

Apparently he loved Shakespeare and lectured on it in Hong Kong well into his 80′s. According to my grandmother when they first lived in Hong Kong he refused to learn Chinese but later changed his mind and mastered the language – granny said they had to learn a new word every day and the equivalent of a verb on Sunday.