Things changed for the colourful Mr Lapraik. In 1863, together with Thomas Sutherland and Jardine, Matheson & Co,. he co-founded the Hongkong and Whampoa Dock Company (Kowloon Docks) which at its peak was the largest shipyard in Asia. 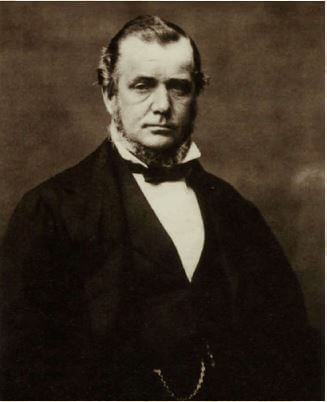 The following article has been extracted from the Dictionary of Hong Kong Biography. Both the author Robert Nield, and HK University Press, have given permission for it to be posted here.

Robert Nield: “Douglas Lapraik, (b. 7th October 1818, London; d. 24th March 1869, London), typified the entrepreneurial spirit of early Hong Kong. He came east in 1839 and became apprenticed to a watch and chronometer maker in Macau, moving across to Hong Kong in 1842.

Having established his own watchmaking business by 1846, he soon found that he had, almost accidentally, also become a shipping agent: all ships needed accurate chronometers and their owners needed a Hong Kong office.

That year Lapraik was one of a group of merchants who bought the 800 ton junk Keying and mustered a crew to sail it to London, a journey of 477 days. Organised to promote knowledge of China and named after Qiying, the Imperial Commissioner who signed the Treaty of Nanking, this vessel was visited by 8,000 people a day when it called at New York and similar numbers in London, including Queen Victoria.

Lapraik’s real ship owning career started in 1850, when he bought two wooden paddle ships, followed by three steamers. With these he started the first regular service to Xiamen, Fuzhou and Shantou, which quickly earned a reputation for efficiency and comfort. In 1855 he stood co-security for the Arrow, the lorcha seized by the Canton authorities in 1856 – an event that provided the trigger for the Second Opium War (1856-1860).

Lapraik acquired a shipyard off Queen’s Road, which he built on, another in Aberdeen, on the south side of Hong Kong Island, and one in Whampoa (Huangpu). Seeing a need for shipyards to be operated as joint-stock companies, he co-founded the Hongkong & Whampoa Dock Company, with Jardine, Matheson & Co. and Thomas Sutherland, agent for the P&O Line, in 1863.

He was a member of the provisional committee of The Hongkong and Shanghai Banking Corporation in 1864 and the principal promoter in 1865 of the Hong Kong, Canton and Macao Steamboat Company. He also had an interest in the formation of the Hongkong Hotel Company.

By now Lapraik was wealthy and a prominent citizen. He built Douglas Castle, a Gothic baronial mansion, in Pok Fu Lam, it still stands as a university hall of residence. He also largely funded a clock tower in Pedder Street in 1862 and was a trustee of the Jardine-sponsored Sailor’s Home. He served on the committee of the first public school for English children, St Andrew’s, from 1855 and was for many years an active Freemason.

Having settled a trust on his Chinese mistress, Lapraik retired to England in 1866, where he married 28-year-old Julia Hearn on 15 November. There were no children.

After his death his nephew, John Lapraik formed the Douglas Steamship Company in Hong Kong in 1883 and continue to run its fleet of eight coastal steamers. John also donated to St John’s Cathedral a stained-glass window in his uncle’s memory, but this was destroyed in the Second World War.

Lapraik’s watch business was acquired by a former employee, George Falconer, and still trades in that name.”

This article was first posted on 7th January 2017.