Tymon Mellor: Mining for Wolframite at Sha Lo Wan started in late 1951 and by March, 1952 around 700 miners, growing to 1500 were working the hillsides on North Lantau. After an initial find in a gully on a weathered outcrop, the miners started digging tunnels to extract the minerals from the veins. Mining continued throughout the 50’s and into the early 1960’s. Following the initial discovery of Wolframite (the main ore for Tungsten) on the hillside behind the village of Sha Lo Wan in 1951, illicit mine workings started to appear. Three stringer veins were located and these were initially excavated then a fourth vein was located high on the hillside, at around the 400m contour. The Government considered clearance of the shacks and buildings associated with the illegal mining works but instead awarded a number of temporary mining licences and allowed the new operator to clear and manage the sites. However, the then recently formed Mines Department; responsible for the management of the mining activities were not helping, as recorded in a 1952 memo, “subject to unnecessary red-tape from the Mined Department” delaying construction of the workers accommodation and starting of the legal mining. The ongoing illicit workings had resulted in the pollution of the San Tau and Sha Lo Wan village water supplies with silt. With every heavy rain, silted water would flood the rice fields and cover them with sand (evidence of this is still visible today). The miners would get their supplies from the villages in Tung Chung, who’s fields had not been disturbed.

The miners lived on the hillsides for months on end, living in holes, tunnels lean toe and grass huts. There were supported by hawkers and food vendors. The mineral finds were sold locally and one Wong Fook Cheung, an ex-Detective Sergeant, established himself in Ma Wan Chung as the main dealer. The minerals were shipped by junk to Castle Peak and Tsuen Wan although there was rumour at the time that they were also heading to Macau. Despite the problems caused by the mining works, the local villagersknew how to make the best of the situation. It is alleged that one of the village elders, Mr Chan Kwong, would let out mining sites based on a percentage of the ore produced, then later at a fixed fee of $10 per day. The wife of the village elder and Mr Mok Teng Fu, the Sha Lo Wan school master were also said to be involved in the business. Once the illicit mines were cleared it is recorded that Mr Chan Kwong demanded $10,000 compensation from the mining contractors.

In June, 1952 a survey was undertaken of the area, the illicit mining had been addressed and accommodation was being erected for the licenced workers. The mining process was simple; using hand tools, small tunnels were excavated along the mineral veins and the ore removed. It is noted in a 17 June, 1952 report that mechanization was not profitable due to the scarcity of the ore. The extracted ore was then crushed and washed in the stream waters. 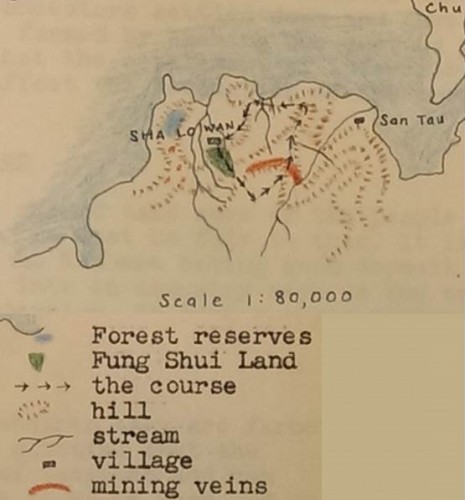 By January, 1953 the licenses had started to mobilise and clear the areas. Temporary mining licence number 12 had some 20 registered miners and was erecting accommodate quarters. The building and mining works were being managed by Mr H M Wade of Structural Products Co, a man with “some practical experience in underground mining”. Temporary mining licence number 13 using Ton Loy Traders as the contractor had cleared an area and had constructed two quonset huts (a lightweight prefabricated structure of corrugated galvanized steel having a semi-circular cross-section). The contractor cut two deep trenches to get through the deep overburden and locate the mineralised area. These trenches can still be found on the hillside today.

A local company, The Bank Line (China) Ltd was interested in production of the ore for shipment to Japan, through Andrew Weir & Co, a local “reputable firm” as advised by the superintendent of Mines in a memo dated 7th January, 1953.

Mining continued during the early 50’s using traditional methods, details of the production are limited but one record indicates that in December, 1952 2,866 catties or 1,433kg of ore was produced, approximately 12% of Hong Kong production and worth around HK$25,000 in 1952. In 1954 the Far Eastern Prospecting And Development Corporation Limited was formed and took over the mining license. They established a facility and started large scale working that were active until the 1960’s. The company was dissolved in 1979.

The site is now heavily overgrown but evidence of the mining activities can still be found. 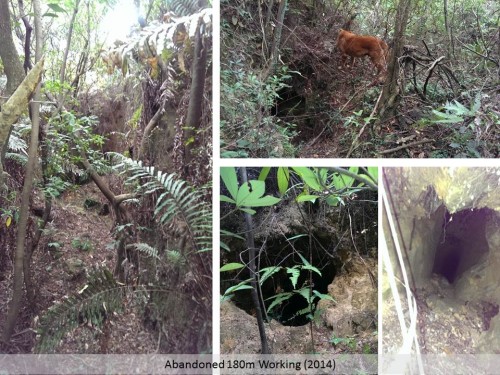 This article was first posted on 19th December 2014.

Related Inddk articles: We have many articles on HK mines – the index shows all of these.

The main mines covered are:-