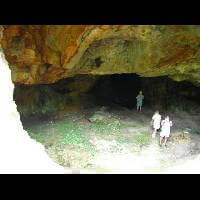 This brief history of the Lin Ma Hang Lead Mine does not attempt to cover the geology or mineralogy of the area or mine, nor details of the mine workings. For a very full account, which includes this information plus photographs, and further references, try The Story of Lin Ma Hang Mine as shown in Source 1 below.

Lead was discovered in the Ling Ma Hang/Sha Tau Kok area in the 1860s. Old workings from this period have been found within 1km of the main mine. The lower workings of the mine, known as the Portuguese Workings, were operated in the 19th century.

The main vein was discovered in 1915 by local Chinese miners searching for limestone.  The galena deposits proved to be the largest in Hong Kong. A mining company was formed in 1917, but only operated for three years. A 75 year mining lease, Mining Lot No. 3, was issued in 1925, backdated to 28thJune 1922, to Morrison Brown Yung.

The mine changed hands in 1932 presumably as a result of Morrison Brown Yung’s death in that year. For a short time the mine was operated by a Chinese firm who only extracted a small quantity of high grade ore.

A public listed company, Hong Kong Mines Ltd, was incorporated in Hong Kong on 18th November 1936. The mining lease was transferred to this company on the 18th March 1937.

However in January 1937, general management of the company had been taken over by an  American firm based in the Philippines, Neilson & Co Inc, and L R Nielson was appointed Chairman of Hong Mines Ltd.

Major development of the mine occurred which included construction of a processing plant, workshops, stores, an office and housing for the staff. In 1938 Hong Kong Mines employed a labour force of 500, of whom 350 worked underground and 150 on the surface.  It was during this period that the mine produced the most ore, between 150 and 225 tons per day. (From the First World War until 1940 annual output of lead exceeded 3,000 tons.) Further development work was undertaken, but mining was suspended in 1940 with the outbreak of war.

Small-scale mining was carried out in a haphazard way during the Japanese occupation from 1941 to 1945. This was done mostly by robbing pillars in the eastern section of the mine, which resulted in the roof caving in and making it generally unsafe.  Most of the equipment was removed during this time and the buildings were looted and damaged but probably not by the Japanese.

HF: Craig Mitchell has kindly allowed me access to his collection of WW2 images. One of these is a photograph of the Lin Ma Hang mine. This shows the layout and function of the mine buildings. I wonder when the photograph was actually taken?  The preceding paragraph suggests that the “buildings were damaged” sometime during the Japanese occupation of HK. 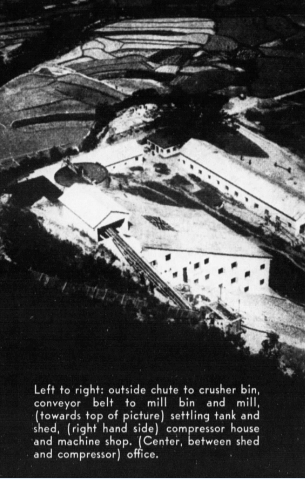 The  above photograph is in a confidential report about possible air targets in the “Canton Area” issued in 1943. The report was issued by the Office of the Assistant Chief of Air Staff, Intelligence, Washington DC. Many thanks to Malcolm Morris our webguru for separating this image from another on the same page of the report.

Lawrence Tsui suggests “There was some mention of mining done during the Japanese Occupation, especially the Lin Ma Hang Mine, in the intelligence reports of the British Army Aid Group (BAAG).

Elizabeth Ride has sent the following BAAG reports and letters. HF I presume the “Lim” in the first one is a typing mistake.

Hooper report: … … “In the course of the conversation, Major Yao [KMT] hinted at a raid on the Mine at Lin Ma Hang … and requested our help for the purpose.  I offered all our services … a raid on the Mine for the large stocks of dynamite there has long been an ambition of his”.
Hooper report:  “… Sunday 7.3.43 was suggested as a possible date and Major Yao and Capt Siu again hinted at the possibility of staging the raid on the Mine …   There are now said to be 25 Japanese troops (reinforcements) at Lin Ma Hang … …The Japanese have been heavily reinforced all along the border (i.e. at Shataukok,Takuking, Linmahang …”

Letter from Col Ride to Military Attache, 14.9.43
“… … I gather that the lead production of the Lin Ma Hang Mine was extremely important to the enemy.  I am trying to find out whether the mine is being worked.  If it is and its lead production is so valuable, I suggest it might be a more valuable job to throw it out of production by destroying the dynamos … …  This work of course will be done by Chinese Agents and not regular BAAG personnel. … …  Would you kindly inform me whether you are interested in this particular job”.
Letter from Lt Col Hooper to Col Ride, 13.12.43.
“On every possible occasion I have brought up the question of demolition or a sabotage operation against the mine at Lin Ma Hang with the Chinese Authorities, but with the usual result.  They are not prepared to do it themselves (and we cannot do it without their approval and cooperation).  … … I told [the Chinese Major] … that I wanted to get on with the job but without the approval and cooperation of the Chinese Military I was unable to do so. …   I added that I was under orders to put the mine at Lin Ma Hang out of commission, as this was of considerable importance to the Allied war effort, but that all attempts on my part to arrange for the carrying out of these orders met with a bland refusal from the Chinese military authorities.”
Letter from Lt Col Hooper to Military Attache, 9.3.44
“I fully appreciate the delicacy of the subject matter of these talks with the (Chinese) Major about sabotage operations and I therefore hasten to assure you that:
a) the object I had in mind in these discussions was Lin Ma Hang mine, which is in British Territory and which I have been informed is a priority target; and
b) in all these discussions I have always stressed the fact that anything we do should be done with the full approval of Chungking.  Without this I am convinced that any such scheme is doomed to failure.  In any event, I doubt very much if these offers will ever get beyond the discussion stage!”
ER adds:
The above extracts may seem rather senseless, taken out of their context, but maybe of some general interest as they show that Lin Ma Hang was operationally important.  The successful sabotage the BAAG did carry out was on ZBW, the HK radio station, but generally speaking they were not allowed to do this kind of work, it being SOE business.
KWIZ #72, 27.10.44.

After the war the mine continued to be looted and it remained effectively abandoned until 1st October 1951 when the Colonial Secretary  approved its re-opening. From 1951 until 1954 various contractors were employed after the company decided not to undertake its own operations. Output did not exceed 750 tons per annum.  From 1st November 1951 to 30th April 1952 the mine was operated under contract by Tonley & Co. In February 1953 a new contractor Foo Yuen & Co signed an agreement.  Eleven men worked underground and the same number above. The mining method was entirely manual.  L R Nielson visited the mine in December 1953 and was displeased with the bad mining practices he found, “showering the men with cursings and swearings.”

In September 1954 Hong Kong Mines decided to resume direct mining operations.  However, attempts to give new life to the mine were unsuccessful –  labour disputes, strikes, typhoon damage, and falling lead prices led to a supposedly, temporary closure of the mine on the 30th June 1958, with about 60% of the reserves mined. The HK Government rescinded the mining lease in April 1962 and on the 13th the formal order for re-entry  was registered thus ending Hong Kong Mines Ltd’s rights over the property. The mine was abandoned the same year.

Lin Ma Hang lies within the Frontier Closed Area and is  therefore  inaccessible to non-permit holders. (This may change as the border area opens up to development.) It is apparently possible to go a short distance into the underground workings where a cavern can be seen and maybe into a lower gallery. There are also the remains of the processing plant and spoil heaps.

The mine now holds one of the most important bat colonies in Hong Kong and was designated as a Site of Special Scientific Interest (SSSI) on 13 August 1994.

http://www.hkadventurer.com/linmahang/linmahang.html A Hong Kong Adventurer group visit made to the mine on 2 June 2013 including photographs of the general area, external features of the mine and several very interesting images taken inside including short videos. 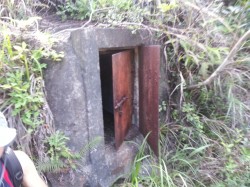 This article was first published on 18th August 2014.

These sources would also be of interest though I have not read them:

This article was first published on 23rd August 2014.

More HK Mine articles in INDHHK: