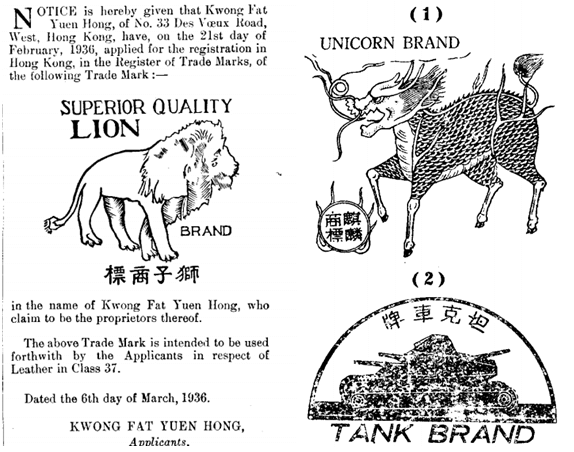 Founded in 1867, Kwong Fat Yuen Hong is one of the oldest Chinese businesses in HK and in the early 20th century, the firm was known as “the King of Leather” with branches across China and Asia. Over the past 150 years, the four generations of the Yeung family which controlled Kwong Fat Yuen were involved in a variety of businesses outside of leather ranging from real estate, wood, tea, insurance to tropical fish and a member of the third generation was even a famous actress during the silent film era.

The story of Kwong Fat Yuen began with Yeung Tai-koon (楊大貫) and his brother Yeung Tai-lai (楊大麗), who started out in their native Lo Village (羅村) in the Nanhai prefecture (or Nam Hoi based on Cantonese pronunciation) in the Guangdong province as small merchants selling leather goods and cow hides in the 1860s. Multiple sources cited that they started Kwong Fat Yuen Hong in Hong Kong during the early years of the reign of Emperor Kuang Hsu (1875-1908) and according to a 1868 directory there is a “Kwong Fat Yuen” operating out of 52 Bonham Strand which could potentially be the same firm.

With 300 pieces of silver raised from family and friends, the Yeung brothers established Kung Cheong Leather Factory (公昌皮廠) on one mou of land in Nanhai next to a pond with 4-5 workers. Thanks to the success of Kwong Fat Yuen and others, thousands of villagers from Lo Village joined the leather trade over time and Lo Village became known for its leather goods across China.

Yeung Chun-cho started working for his father at an early age and learned all aspects of leather making working at the leather factory after school every day. Once he took over, he significantly improved productivity and product quality by upgrading the leather production process through re-ordering process flow, enhancing quality control and diversifying sourcing. Soon the leather manufacturing operation in Nanhai expanded from 1 mou to 10 mou and the workforce grew from a few to 300 workers and another factory – Tung Lok Leather Factory (同樂皮廠) was added. Yeung Chun-cho himself moved to Hong Kong which handled exports to Southeast Asia and established Kwong Wo Yuen Leather Store (廣和源皮行) in Canton and other branches throughout Southeast Asia while his older brother Yik-cho opened the firm’s market in northern and eastern China and was based out of Shanghai and Tientsin after 1895. Yik-cho was also involved with the Shanghai Chamber of Commerce and supported Sun Yat-sen’s revolutionary cause. Younger brother Yeung Lee-cho stayed in Nanhai where he built himself two four-story mansions, one of which known as “Gweilauchong” (鬼樓莊) for its Western style architecture that was built in 1929 still stands and is a preserved heritage building.

In Nanhai, the Yeung brothers were also known for their philanthropy aside from bringing many of their fellow villagers into the leather business. In July 1915, days of rain resulted in severe flooding in the Nanhai area and many villagers lost their homes and were starving. In response, Yeung Chun-cho organized relief effort at the ancestral hall, handing out congee to affected villagers. As diseases spread after the flood water subsided, Chun-cho established Koon Lai Hospital (貫麗醫院, named after his father and uncle) in Lo Village to provide free medical care and donated 70,000 silver dollars towards the construction of 10 km of roads and irrigation system to prevent further flooding of the village’s paddy fields. 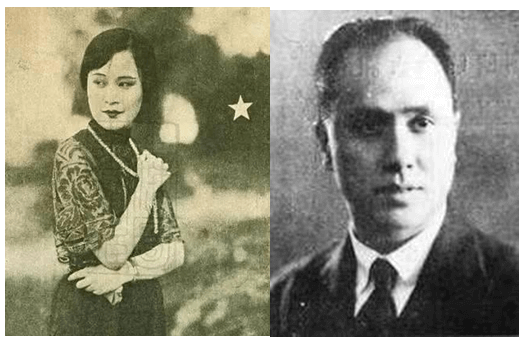 The most prominent members of the third generation of the Yeung family were Yeung Yik-cho’s son Yeung Chung-cheuk and daughter Yang Nai-mei and Yeung Chun-cho’s sons Yeung Ngok-fai and Yeung Yam-shue.

Yeung Chung-cheuk (楊仲綽), who succeeded his father in business and became the leader of the Cantonese community in Tientsin. Using the profits from leather, Chung-cheuk developed real estate in Tientsin under the name of Fook Yam Co (福蔭公司), including two rows of 2-3 story buildings and a new road to the east of the vegetable market in the French concession in Tienstin which was named Yeung Fook Yam Road (楊福蔭路) after the names of the family and the family business in 1918. The roadbecame known as the Wall Street of Tientsin as several banks (at least six) rented properties from the Yeungs on the road as offices.

In 1927, Chung-cheuk was elected chairman of the Kwangtung Association of Tientsin (天津廣東會館), which operated a school (the Tientsin Kwangtung School) and organized Cantonese concerts in its assembly hall. After the Japanese occupied Tientsin in 1937, Chung-cheuk focused on business and stayed away from politics but business suffered thanks to the harassment of the Japanese military administration and its collaborators and as a result, Fook Yam Co went out of business in 1943. After the War, Chung-cheuk relocated to Hong Kong.

Yang Nai-mei (楊耐梅, 1904-1960) was one of the biggest Chinese movie stars from the silent film era. Born as Yeung Lai-chu (楊麗珠) and a graduate of the Wu Pen Girl’s School (務本女子中學) in Shanghai, she made her film debut with the Star Motion Picture (明星電影公司)’s The Soul of Yuli(玉梨魂) in which she played a playgirl who refused to settle down after marriage. This was followed by lead roles in other silent films which established her as one of the leading movie actresses in China in the 1920s and even started her own movie production company at one point. Her father Yeung Yik-cho, however, disapproved of her movie career and she married several times. She retired from acting in the 1930s andlater settled in HK with her husband Chan Kwon-king (陳君景, 1899-1957), a Lingnan University graduate and the son of revolutionary leader Chan Siu-pak (陳少白), who was known as one of the “Four Desperados” with Sun Yat-sen, Yau Lit (one of his grandsons is married to Carrie Yau, former Secretary of Health, Welfare & Food) and Yeung Hok-ling. Sadly the couple was bad with money and by early 1957,Chan was working as a stonecutter in New Territories and had split with Yang who was found begging on the streets in the Western district. Thanks to the assistance of others after press coverage, Yang was admitted to the Kwong Wah Hospital and was reunited with her daughter and son in law later in the year in Taiwan, where she died in 1960. 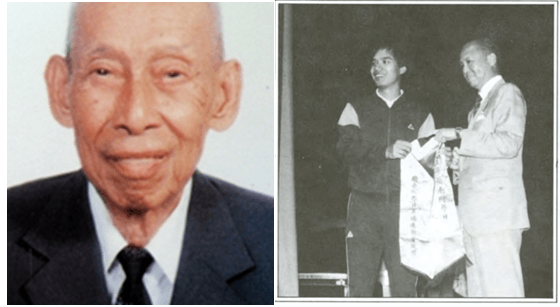 When Yeung Chun-cho died in 1934, he was succeeded at Kwong Fat Yuen Hong in HK by his son Yeung Ngok-fai (楊萼輝).Born in 1904, Yeung Ngok-fai was raised in Canton by his stepmother and came to HK to study under several top Chinese scholarsincluding the mandarin Lai Chai-hei (賴際熙,1865-1937), the founder of the Hok Hoi Society (學海書樓, Ngok-fai was involved with the Society later in life as a result of this). Ngok-fai forego the opportunity of pursuing further studies to assist his father in the leather business.

In the 1930s through 1960s, Kwong Fat Yuen Hong was operating out of 33 Des Voeux Road West where it was involved in the import and export of hides, soles, upper leathers, shoemaking materials, industrial chemicals, dyes, red wood, tung oil and tea. It marketed its upper leather under the “Double Sword” brand and its hemp seaming twine under the “Lion” brand. At Kwong Fat Yuen Hong (KFYH), he was assisted by Chan Heung-pak (陳香伯, 1886-1957), who served as Secretary of the firm. Chan worked for Dr. Sun Yat-sen in Shanghai in his early years and was chief interpreter at the law firm Deacons before joining KFYH. Outside of work, Chan was a director of the Chinese Chamber of Commerce and the only Chinese member of the program committee for ZBW, the precursor of RTHK, in 1929. Outside of the leather business, YeungNgok-fai was also chairman of South China Fire& Marine Insurance (南華保險), which was incorporated in HK in 1916, renamed South China Insurance in 1962 and dissolved in 1999. Other directors of the insurer included his brother Yam-shue and Sir Kenneth Fung of Bank of East Asia.

For over half a century, Yeung Ngok-fai was active in community affairs in HK. When Tung Wah, KwongWah and Tung Wah East formed the Tung Wah Group of Hospitals in 1931 with Ngan Shing-kwan of KMB as its first chairman, Ngok-fai was one of the first directors of the consolidated organization. He was also elected treasurer of the Chinese Chamber of Commerce (華商總會, precursor of CGCC) and chairman of the HK & Kowloon Hide & Leather Traders Association (港九皮業商會) when it was formed in 1946 and the Nam Hoi Traders Association.

Ngok-fai’s younger brother Yeung Yam-shue (楊蔭恕, 1925-2012)who was also involved in KFYH and South China, was the president of the Lingnan University Alumni Association from 1984 to 1986. 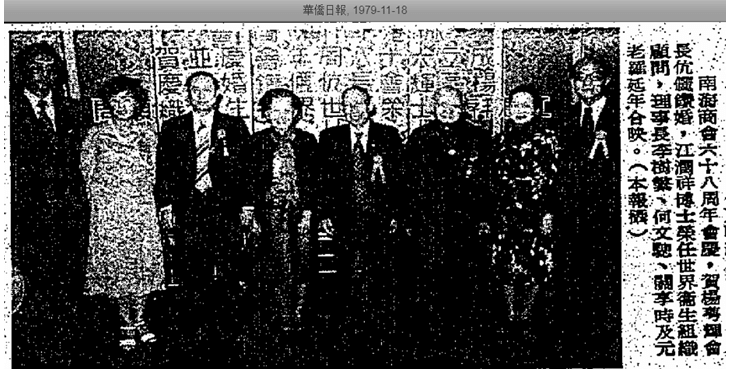 Yeung Ngok-fai and his wife Lo Lai-ching (盧麗貞) have ten children. Their eldest son cho-lun (楊祖麟) is a Lingnan graduate. Their second son Yeung Cho-yee (楊祖詒) studied chemical engineering in Melbourne, Australia before earning his M.S. degree from Rensselaer Polytechnic Institute in the US. After his studies he worked for the Research Center at E.D. Jones Corporation where he developed a machine that could convert wood pellets into paper. This machine was sold to a major paper mill in the West Coast for production of newsprint and marketed to Japanese paper companies such as Mitsubishi Heavy Industries in Japan. In addition, Joey and his brother were the proprietor of New Paris Farm (新巴黎農場) in Aberdeen and a tropical fish business which operated the aquarium business at the Daimaru department store in Causeway Bay and exported tropical fishes to all corners of the world.

This article was first posted on 24th December 2018.