HF: “For 700 years, the oyster beds of Lau Fau Shan have been producing the prized shellfish, but they’ve lost their lustre amid contamination fears linked to climate change. A four-part plan aims to revive the industry.” From the SCMP 17th January 2016.

Further extracts: A third-generation oyster farmer [Chan Yu Tong], …has seen the 700-year-old industry in Lau Fau Shan struggle to cope with challenges from inefficient cultivation methods and an ageing workforce to the occasional health scare.

“Oyster culture is important to Hong Kong because it is our cultural heritage, and the (cultivated) species (Crassostrea hongkongensis) is named after our city,” says Vengatesen Thiyagarajan. 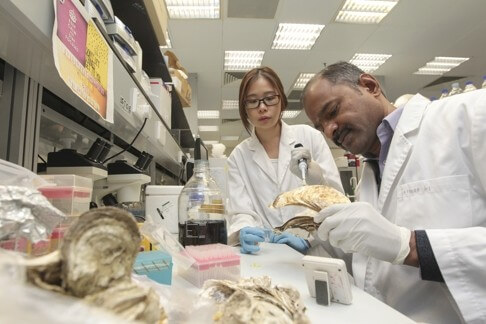 That’s why the researchers are working to install a purification system in Lau Fau Shan, where harvested oysters will sit in ultraviolet-sterilised seawater for up to four days to remove bacteria from their system.

The 2,000 square metre facility, which can handle 10,000 oysters every day, is expected to open in the summer. Once the system is up, seafood lovers should be able to savour the home-grown oysters raw. 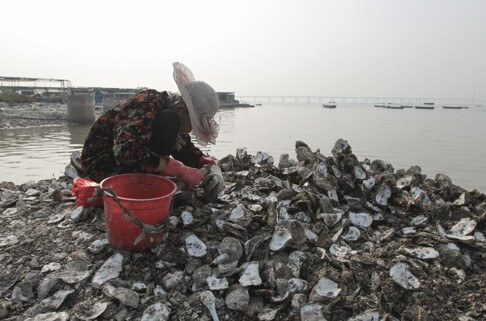 Before raft culture became widespread in the ’80s, villagers in Lau Fau Shan practised bottom culture. This meant cultivating oysters from scratch, allowing larvae to settle naturally on wooden posts planted across a tidal flat and leaving them to grow to marketable size – a cycle that took up to four years. “If the conditions are right, all the wooden posts would be enveloped in oysters. But if we are unlucky, we’d be growing barnacles. This happens about every five years,” Chan says.

Both oyster growers and scientists are acutely conscious of the need to bring new blood into the industry. There are only about 100 oyster growers left in Lau Fau Shan, compared to 700 people in the halcyon days of the ’60 and ’70s.

This article was first posted on 20th January 2016.