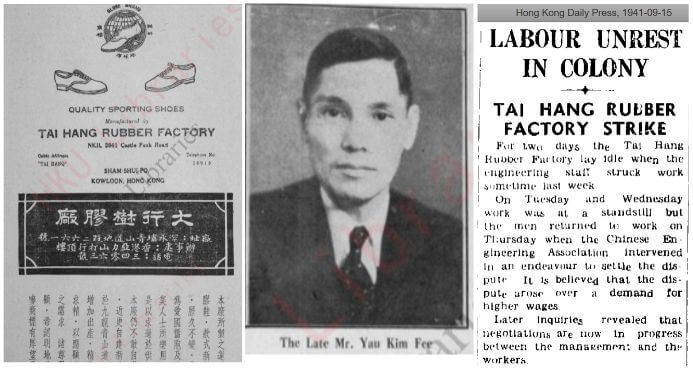 From the 1930s to 1960s, Tai Hang Rubber was one of the big four manufacturers of rubber shoes in Hong Kong with its “Globe” brand of rubber sole sporting shoes.

According to one source, the Tai Hang Rubber Factory was established in 1922 but was taken over by the trader Yau Kim-fee (邱儉非a.k.a. Yau Kiam-fe, 1895-1941) in 1933 who also started the Sun Wa Rubber Factory the same year and served as manager of both. (A Century of Commerce, 1941) A native of Fa Yuen in Guangdong province, Yau’s father Yau Yuk-chuen (邱玉泉) founded the import export firm of Wai Sun Tai (維新泰金山庄, a “Gold Mountain” firm involved in trade between the US and China) in Hong Kong. Kim-fai himself was educated at the Sai Ying Poon School and Queen’s College in HK and left for America at the age of 19 where he was involved in import export trade for 7 years. As the eldest son, he returned to Hong Kong in 1920 to take over Wai Sun Tai when his father decided to retire.

As Yau Kim-fai became more involved with Tai Hang Rubber in the 1930s, his younger brother Yau Fung-hon (邱鴻漢), who graduated from HKU with a B.A. in engineering, took over Wai Sun Tai (which operated out of 71 Connaught Road West) as its manager and was also manager of James Yau & Co.

Before the War, Tai Hang’s offices were listed as the top floor of the Alexandra Building in Central while its factory was located at 1-9 Yen Chow Street. In 1935, a dispute turned into a fight between Tai Hang workers and others during an after-work soccer match on the street near the factory in Sham Shui Po and one of the workers was knifed and injured as a result. (Tin Kwong Po, 1935-6-8) In September 1941, a two day strike broke out at Tai Hang led by its engineering staff over wages but was resolved after the intervention by the Chinese Engineering Association. (HK Daily Press, 1941-9-15)

In 1941, Yau Kim-fee died at the age of 46 and was survived by his wife Fung Kiu-ying, two sons and five daughters. He was succeeded at Tai Hang Rubber by his eldest son Yau Tat-koon (邱達觀), who was also assistant manager of James Yau & Co (managed by his uncle) in addition to manager of Tai Hang. Outside of work, Tat-koon was a racehorse owner (KSEN, 1957-8-2) and his cousin Yau Tat-hay (邱達禧) was a prominent amateur jockey in the 1950s through 1970s who had served as headmaster for various government primary schools. (Tat-hay’s sons Ernest and Gordon are both anesthetists and have owned and raced horses in HK and Singapore) 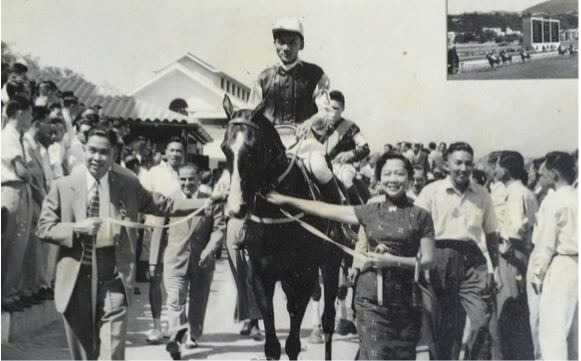 Tai Hang’s factory at 235 Castle Peak Road was three story tall with the first two floors being the factory and the third floor as its office. At the time, the firm paid its 750 workers in cash on the 5th and 20th of each month and sadly that made it the target of criminals and the factory was robbed in April 1950 by four robbers who took $13000 (TKP, 1950-4-21)

In 1956, Tai Hang was producing 12000 pairs of shoes per day and had 1200 workers with the UK being the primary export market. (WKYP, 1956-6-14) The same year, it opened its new 40000 sq ft factory in Tsuen Wan and the Far Eastern Economic Review described Tai Hang as “one of the largest in the colony” with nearly a thousand workers. In 1957, the factory stopped production temporarily due to reduced business.

In the 1960s, Tai Hang Rubber’s offices was listed at Room 115 on the 1st floor of Windsor House on Des Voeux Road Central (HK General Chamber of Commerce, 1961; International Commerce, 1963)

By July 1970, the slowdown in business has resulted in Tai Hang operating at half of its production capacity.  Coupled that with the fact that the property value of its factory site in Tsuen Wan had soared (bought for $1 a square foot in the 1950s, by then worth $96 a square feet), Tai Hang decided to close its doors on August 2. On August 13, the firm paid three months severance to over 60 full-time workers, many of whom started working at Tai Hang at the age of 14-15 and had worked there for 30-40 years. The remaining 200 part time workers who were paid on a piecemeal basis however did not receive any compensation. (TKP, 1970-8-19)

This article was first posted on 27th January 2020.