Stephen Davies: Further information about the Sainam and her sister ship the Nanning. 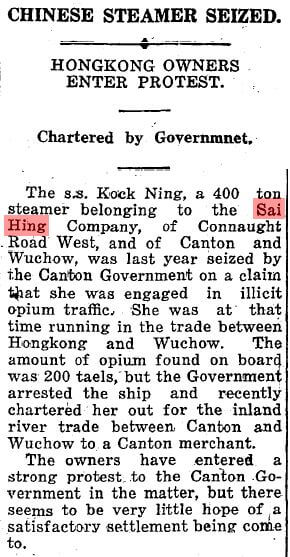 According to Wikiswire the firm relocated to Guangzhou in 1941. However the Lloyd’s Register entries have the Sainam and Nanning home ported in Guangzhou (Canton) as of 1935, though for the five years before that they are simply reported as being Chinese flagged, without a home port. That suggests the Sai Hing SS Co had a foot in both places probably from the start (as suggested above), and must have seen some advantages to the Chinese flag, which was relatively unusual in the 1930s.

The Nanning was cited in a Chinese Imperial Maritime Customs document in 1933 (Preventive Secretary’s Printed Note No.8, 7th April 1933, Edwin A Pritchard, Preventive Secretary) as having been rummaged in 1932 and affording an example of how crew created smuggling ‘hides’ around the ship:

Interesting that it was the Chief Comprador’s cabin!

That tipped me to have a look and both ships were in Lloyd’s Register right the way through the 1920s and 1930s to the end of WW2, suggesting that they successfully kept going as river vessels at least to after the beginning of WW2. Lloyd’s has no data on when or if they were sunk, but they certainly disappear from the list promptly in 1945. They are both always listed as ‘paddle’ vessels. Given local conditions, they did very well to last 40+ years. That Harry Long was right to be afeared (and that the Sai Hing SS Co was NOT HK based by the 1920s) there is this story from the SCMP.

The Sainam piracy evoked a huge coverage in the press that ran on for weeks.