Our article about Harry Long working for the Kung Lee Steam Ship Company mentioned that “he was a superintendent and engineer on boats taking cargo upriver from Canton. It was a dangerous job and he often had to use firearms to fend off pirates.”

This prompted Stephen Davies to recall an incident near Samsui (aka Samshui) where the HK, Canton & Macau Steamboat Co’s sternwheeler Sainam, built in 1900 by the George Fenwick shipyard, Wanchai, Hong Kong was pirated in 1906. As Stephen says, this will have predated Mr Long’s appointment, but will certainly have been a lively memory within the company. 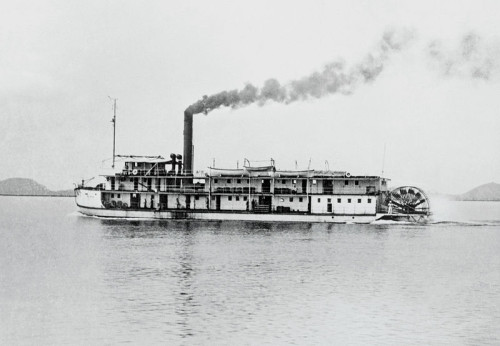 The full story of can be read at wikiswire, linked below. Here are the main details of the dramatic event:

July 13th 1906.  While on a voyage from Kankong, on the West river, to Samshui, the vessel was captured by pirates who had boarded the ship disguised as passengers.

The only Europeans on the “Sainam” were Captain Arthur Wesley Dixon,  Chief engineer J Leggie, and The Rev. Dr.R.J. Macdonald. of the Weslyan Missionary Society. Noticing a disturbance between the watchman and some passengers (some of whom were the pirates in disguise), they quickly went to his assistance. However about 20 of the pirates charged them with swords and firearms, one of the pirates firing a small rifle the bullet of which lodged under Captain Arthur Wesley Dixon’s breast bone.

The three of them ran to the wheelhouse pursued by the pirates. However before they managed to reach the rifles by which they had hoped to defend themselves, they were forced to leave the wheelhouse by the opposite side. On coming out of the wheelhouse they were met by more pirates armed with swords and rifles, so they turned and entered the saloon, J Leggie being the last to enter closed the door behind him. Noticing the bleeding from Captain Dixon’s wound, who was unaware of being wounded, the Dr. examined him. While the Dr. was examining him, the pirates threw a stinkpot into the saloon. Captain Dixon and the Dr. rushed out of the saloon. the Dr. being killed instantly by a revolver shot to the head.

The captain managed to reach the Dr’s cabin where he fell to the deck, blood coming from his wound, the pirates kicking him as he lay on the deck, and he feigned death. Before leaving him for dead, the pirates wrenched a gold ring off his finger, tearing his skin and flesh in the process.

Chief engineer J Leggie was helped by one of the firemen to a small space behind the boiler where the pirates could only approach him singly, but they were afraid to do so. The pirates having control of the ship proceeded to a creek where they anchored and systmatically looted the vessel, transferring the loot into five long narrow boats.

After the pirates left the “Sainam” the pilot took over and proceeded out of the creek. Captain Dixon was assisted to a chair on deck where he remained at his post until the ship reached Samshui. Chief engineer Leggie come out of his safe place, his injuries being burns caused by the hot boilers and being scalded by steam.

Stephen adds,  Interesting that when the Sainan was sold in 1917 along with her sister ship Nanning, the purchaser was a Chinese company Sai Hing Steam Ship Co – I can find no reference to this outfit. It may not have been a Hong Kong company.

This article was first posted on 10th September 2015.
See: