When it comes to Hongkong’s “Red Capitalists”, Henry Fok (whose biographical entry I wrote for the Dictionary of HK Biography) is probably the first name that came to most people’s mind. Another important “red capitalist” from the same era was Kwan-cheng Wong (hereafter referred to as “K.C. Wong”). Like Fok, Wong was a pioneer in the post war development of the HK real estate industry and two buildings which he developed in the 1960s – Metropole Building and Fortuna Building remains landmarks in North Point. Wong’s business interests also extend to shipping, trading, canned meat and retail – with his best-known venture being the Chinese Arts & Craft department store which he co-founded in 1959.

Born in Ningbo in 1907, K.C. Wong was the youngest of 4 sons of a small merchant. At the age of 15, he started working at a trading firm in Ningbo in 1922 and became the controller of the firm upon finishing his apprenticeship three years later and married the daughter of the number two person at the firm. In 1932, Wong became the head of purchasing for Tai Feng Flour Mill in Ningbo, a firm which counted Tu Yueh-sang, the godfather of Shanghai, as a director. Three years later in 1935, he started his first business – the flour trading firm of Verder. In early 1937, he moved to Shanghai where his trading business was renamed Verder& Co and became involved in trading of canned goods, wool, timber in addition to flour imported from the US and Canada.

In July 1937, the Sino-Japanese War erupted and the Japanese occupied most of northern and eastern China within months. Wong saw the crisis as an opportunity and set up shop in the International Settlement in Shanghai which was free from Japanese control and served as a window to the outside forthe occupied regions which were strapped for supplies such as flour. In the four years between 1937 and 1941 when the Japanese finally took over the International Settlements after the outbreak of the Pacific War, Wong’s Verder importedover 3.8 million bags of American and Canadian flour (84000 tons)into Shanghai and North China and saw its capital expanded tenfold. The profits enabled Wong to invest into other businesses such as manufacturing (such as the maker of “555” brand clocks), real estate, banking and shipping. In late 1942, Wong left Shanghai for Chungking where he accumulated lots of British pounds and HK dollar banknotes that were issued by HSBC in Hong Kong during the Japanese occupation. These HKD notes were trading at 20% of face value due to concerns that they might not be recognized after the War. When the colonial government and HSBC honored the bills in April 1946, Wong made five times his investments. He also returned to Shanghai where he resumed the operations of Verder in trading of construction materials, fertilizers and flour. In July 1947, the 40 years old Wong decided to move to Hong Kong with US$3.2 million in capital, almost two years ahead of most Shanghainese capitalists. While many headed to the British colony to flee from the Communists who were taking over in the mainland, Wong’s move was motivated by business opportunities in Hong Kong as he had a great relationship with the Communists and in fact led a HK delegation to the founding ceremony of the People’s Republic in Beijing in 1949. 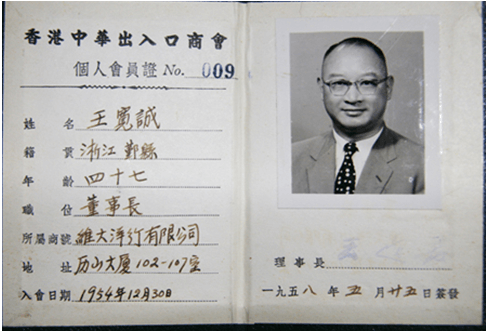 When K.C. Wong arrived in Hong Kong in 1947, he found land to be particularly attractive with it only costing HK$7 per square feet in North Point which was relatively undeveloped at the time. He formed Dah Yuan Real Estate (although the firm was not incorporated until 1952)and started buying up land at the site of the former Ming Yuen Amusement Park (which first opened in 1918) and building residential buildings on top to meet the housing demand from refugees from the mainland, many of whom came from Shanghai. A total of 28 four-story buildings with no lifts were built on Ming Yuen Terrace, Ming Yuen West Street (new street established after the fire of Nga Choy Hang village in 1952), Peacock Road, Eagle Road, Swallow Road, Sunning Road and Peiping Road (now Lan Fong Road) at the total cost of HK$6 million, generating monthly rental income of HK$150,000 and paid back in 3 years. In 1950, the 5 story Ming Yuen Mansion (明園大廈) was built with the ground floor being leased to others such as HSBC while the top four floors were residential. This was later re-developed into taller buildings of the same name in the 1960s.

In February 1954, K.C. Wong opened Metropole Theatre (都城戲院) at the intersection of Ming Yuen West Street and King’s Road, the second deluxe theatre built in North Point in the post-War era after the Empire Theatre (later renamed State Theatre) which opened in 1952. At first the Metropole showed Western movies but as Western studios shunned Wong due to his Beijing ties, the theater shifted to showing Mandarin language filmsfrom studios such as Cathay. Due to intense competition within the district and rising property value, K.C. Wong shut down the Metropole Theatre in January 1963.

In the 1960s, Dah Yuan developed several larger scale properties. In 1960, Dah Yuan built Fortuna Building (幸福大樓), a 30,000 sq ft residential complex comprised of one section of 15 floors and another section of 11 floors. The firm also re-developed the site of Metropole Theatre into Metropole Building (新都城大廈) in 1965. The housing development, which include 4 blocks of 25 floors, was designed by the architects Tam Heung-shing (father of Mrs. Cheung Yuk-lun), Szeto Wai (legislator) and Chiu Sai-ching and featured garbage chutes and mail chutes, which were relatively unique in HK at the time. In 1965, K.C. Wong co-founded the HK Real Estate Developers Association with Henry Fok and other developers.

Like his fellow Ningpo natives such as Y.K. Pao and C.Y. Tung, Wong was also involved in shipping.  These activities were conducted through Jebmei Shipping Management (捷美輪船), which wasincorporated in 1962 and Shipping Managers (HK) Ltd (香港輪船代理有限公司), which was active from 1960 to 1966. Jebmei remained in family control and was renamed Chariot Asset Management in 2007. 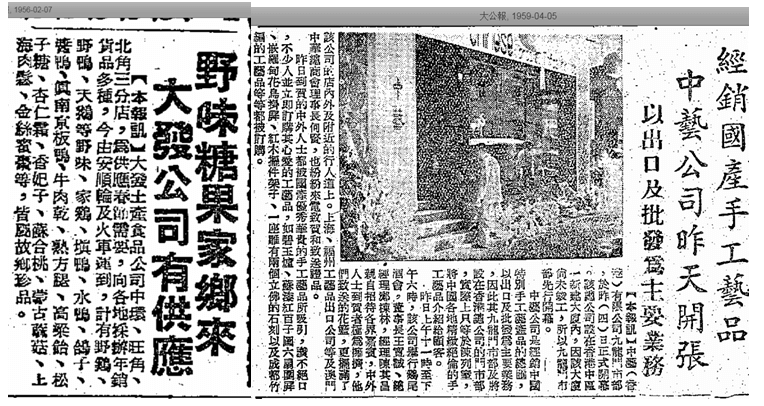 As mentioned above, K.C. Wong was close to the Chinese Communist Party early on and during the Korean War, he donated a fighter jet to the People’s Republic and sold HK$5 million worth of properties in HK to purchase supplies which were shipped to Shanghai to support the war effort. From 1958 until his death, Wong served as vice chairman and chairman of the pro-Beijing Chinese General Chamber of Commerce and Chinese Import Export Association in HK. He was also a member the 2nd, 3rd and 4th Chinese People’s Political Consultative Conference (CPPCC) in the 1950s and 1960s and visited Beijing regularly. Aside from politics, Wong maintained close business ties with the mainland.Verder& Co (HK) Ltd, which was incorporated in 1951, was involved in trading with the mainland from early on in products such as cotton and was involved as exclusive Southeast Asian distributor of North Korean ginsengunder the leadership of Qi Lishi (忻禮軾, 1910-2011) in the 1960s.K.C. led the effort in building the Xin Qiao Hotel (now Novotel Xin Qiao) in Beijing in the early 1950s to promote tourism in the new capital city and served as its chairman. Through his high-level connections in the mainland, Wong started Dah Fat and CAC and secured the rights to distribute Chinese food and crafts in HK.

Although Dah Fat Co was incorporated in 1962, it was founded earlier in the mid-1950s. Since its inception, the firm has specialized in distributing food imported from the mainland and was headed by K.C. Wong’s third brotherWong Ker-cheng (王克誠). In 1956, the firm had branches in Central, North Point and Mongkok and was planning a Causeway Bay branch. Over the years, Dah Fat is probably best known for distributing the popular “Ma Ling” and “Heaven Temple” brands of canned meat and the firm also packaged vegetable such as mushroom under its own “Dah Fat” brand. Wong Ker-cheng, who had served as chairman of the industry group HK & Kowloon Frozen Meat Dealers Association, died in 1983 and was survived by 5 sons.

In 1959, K.C. Wong teamed up with another prominent “Red Capitalist” – Cheng Tung-lam (鄭棟林), one of the five co-founders of China Union Trading (广大华行), to start Chinese Arts & Crafts (HK) Ltd (CAC) to sell and distribute high quality arts & crafts from China with Wong serving as chairman and Cheng as managing director. The Kowloon store was the first to open in April of that year on Cameron Road in Tsim Sha Tsui followed by the main store at the new Shell House (now Central Tower) in Central in September 1960 with Sir Tsun-Nin Chau as guest of honor and over 2000 guests. In 1966, the state-owned China Resources and Henry Fokbecame shareholders of CAC and in 1968, CAC became a wholly owned subsidiary of China Resources.

During the 1967 leftist riots, K.C. Wong maintained a high profile as the vice chairman of the “All Circle Struggle Committee”. Many left-wing organizations such as labor unions who were involved with the riots operated out of Wong’s properties in North Point and on August 4th, 1967, the colonial government dispatched helicoptersto the roof ofWong’s Metropole Building and Ming Yuen Mansions to take down the suspected groups behind the riots.

The Last Two Decades and Legacy

Aside from North Point, K.C. Wong was also a pioneer in the development of properties on Castle Peak Road in the Kowloon side. In 1972, Dah Yuan developed the 14 story Man Fuk Building at 40 YuetWah Street in Kwun Tong. In February 1973, Dah Yuan took advantage of the red-hot stock market and went public. But compared to other HK developers which were listed around the same time such as Cheung Kong and SHKP, Dah Yuan was relatively conservative in the 1970s and 1980s and missed out on the golden age of real estate development in HK as Wong focused his energy in mainland affairs. Verder Finance (維大財務) was incorporated in 1973 andMetropole International Department Store (新都城百貨) was established in 1974, occupying 160,000 sq ft at the Metropole Building, selling not only Chinese goods but global merchandise.

K.C. Wong dedicated the last two decades of his life to China and philanthropy. He was elected a delegate to the 4th and 5th National People’s Congress in 1975 and 1978 and executive committee of the 6th CPPCC in 1983. As China began its economic reform in the late 1970s, he joined the inaugural board of Shanghai AJ Group and CITIC in 1979 and 1980. He had been a generous benefactor of many schools in China since the 1960s but in 1985, K.C. Wong made his most significant contribution with the formation of the K.C. Wong Education Foundation with US$100 million of his own fortune. In its three decades of operations, the Foundation had assisted over 10600 Chinese scholars pursue further studies and research. K.C. was also involved in the drafting of the Basic Law and died in Beijing in December 1986 at the age of 80.

K.C. Wong was married three times. His first wife died early and he married his English secretary Lau Cho-kai (劉祖佳) as his second wife in 1946 although the marriage ended in divorce in May 1967. He adopted his nephew M.Y. Wong (王明遠) as his eldest son who joined the family business. Shortly after K.C.’s death, his family sold Dah Yuan to New Zealand conglomerate Rainbow Corporation in early 1987 which renamed the firm Rainbow Orient Corporation. The listed shell was sold again to Polly Peck in 1988 and is now Wing Tai Properties. The family continues to operate over 40 companies including Verder, Magna and Metropole.

This article was first posted on 19th October 2018.