Rainbow and Seven Sea are two key firms in the history of the latex industry in Hong Kong started by two branches of the Wu family from Shanghai. Starting out as a squatter factory, the firms survived multiple fires over the years and family disputes and became the first and leading manufacturer of a wide range of latex products ranging from gloves, pacifiers, soles, balloons to foam for furniture goods such as pillows, mattresses, sofas and cushions with Seven Sea being known for its market leading “Sea Horse” brand of mattresses and furniture.

Rainbow Latex was founded in 1950 by Shiao-wen Wu (鄔孝文) and his younger brother Shiao-wu Wu (鄔孝武), natives of Fenghua in Zhejiang province who came to Hong Kong from Shanghai in the late 1940s and built a 2-story plant at 5 Leung Kung Road (良工道) in Tai Hom Village (大磡村) in Diamond Hill, the largest squatter village in Kowloon at the time.

The firm started out making latex gloves for surgical, household and industrial use, one of the first firms in HK in the business and later expanded to other latex products such as pacifiers, balloons and foam. According to a 1955 article, production of latex foam at Rainbow resembled baking of a cake, which involved mixing latex with chemicals and dyes in a mixer for 30 minutes, after which it was poured into a mold and then dried under a red heat lamp. As the demand for latex foam soared, Rainbow ceased the production of balloons in the mid-1950s to focus on other products. (TKP, 1955-12-15)

In January 1960, a fire broke out at the Rainbow latex factory in Tai Hom Village. The 2-story plant, where the top floor was used to store materials and the ground floor included production space and laboratories, was destroyed and a nearby dinnerware factory and cotton warehouse were also affected, resulting in over HK$600,000 in damages but fortunately none of its 20 workers were hurt. (KSDN, 1960-1-4)

Undeterred by the fire, the Wu brothers quickly resumed production in a temporary workshop nearby although production was limited to household gloves. The firm still participated in the HK Products Expo in late 1960 where it sold latex gloves in three colors – red, yellow and blue for HK$1.50 a pair, which was half the price of imported ones. To resume full production, Rainbow quickly rebuilt a factory building right next to the original site, although the government delayed the issuance of permit for months while the rent for the original site which was leased from the government was increased four-fold and could be reclaimed by the government at any time. (TKP, 1960-12-12) 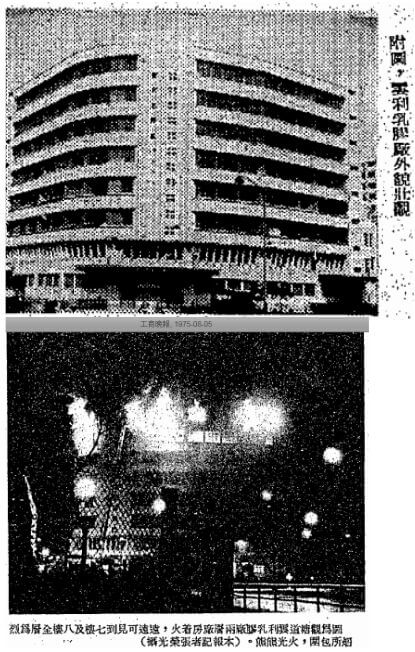 By the mid-1960s, Rainbow had outgrown its space in Tai Hom village and built its 8-story building at 350 Kwun Tong Road in Kwun Tong in 1967 which had total space of 160,000 sq ft (20,000 sq ft each floor) and established its offices at 81 Chatham Road in Tsim Sha Tsui. Around the same time, the Wu brothers had split up with the younger brother Wu Shiao-wu and his wife founding Seven Sea Latex which took over the factory space in Tai Hom village. (WKYP, 1971-6-16)

In the late 1960s, Rainbow invested heavily in technology and expanded into the production of resins, which were previously imported. By 1971, its plant had over 100 workers and had advanced machinery imported from the US worth millions. At the time, Rainbow occupied the three floors in its building in Kwun Tong – the 4th floor was where they manufactured latex gloves while the 7th and 8th floor were for other production of other latex products such as mattresses and sofa foam. In August 1975, a fire broke out at the Rainbow factory on the top floor which lasted for four hours. According to the news report, the factory had 50 workers at the time, most of whom came from the North and had ten latex machines.  (WKYP, 1975-8-6). In 1983, the building in Kwun Tong was sold to Maxwell Electronics (founded by Yu Chung-kwong) for HK$31.5 million for its own use and renamed Maxwell Industrial Building and was sold again to Laws Group in 2017 for HK$1.39 billion.

In the mid-1980s, Rainbow formed Xinli Foam United Limited (新利海綿聯合有限公司), a joint venture with the state-owned provincial packaging firm and bookstore (Xinhua) in Guizhou to manufacture foam, the first foam factory in the province. This was followed in 1988 by the formation of the shoe manufacturing joint venture Baolong Shoe in Zhuhai which by the early 1990s had generated millions in US dollars of revenues.

After the Tai Po Industrial Estate opened, Rainbow built a 3-story plant at 2 Dai Li Street. In 1995, a fourth alarm fire broke out at the Rainbow plant in Tai Po which required over 120 firemen to put out the toxic fumes. Since then, Rainbow Latex had moved out of the site which has been re-developed into a plant for the Maxim’s Group.

Today, Rainbow Latex continues to manufacture latex and rubber foam products and is run by Peter Wu Yau-tak (鄔友德), presumably a son of Wu Shao-wen. As Rainbow supplies to the shoe industry, Peter Wu had served on the board of the HK Footwear Association and was its vice president from 1982 to 1996.

As mentioned earlier in the article, Wu Shiao-wu and his Cantonese wife Wu Leung Wai-sin (鄔梁慧倩) spun off from Rainbow and started Seven Sea Latex in the mid-1960s (as a firm it was not incorporated until 1968). Shiao-wu handled the research and development while Leung was responsible for the business management of the firm and was the face of the company, making her one of the pioneering female industrialists in Hong Kong. The split with Rainbow grabbed headlines when Leung accused her brother in law Wu Shiao-wen of hitting her near Rainbow’s office on Chatham Road on June 6, 1966. The charges were later dismissed at the South Kowloon Magistracy later in the year.

Seven Sea started with making latex gloves under the “Sea Horse” brand in the 1960s. According to a legal document related to trademark, Leung came up with “Sea Horse” as the brand for Seven Sea as Sea is the second character of the firm’s name and her son James was born in the year of the Horse (1954). Using latex imported from Singapore and Malaysia, the “Sea Horse” gloves were exported to overseas markets such as Canada, US, Australia, Middle East, Africa, Southeast Asia and Japan while domestically it was sold to dyeing mills, restaurants, households and other industrial concerns.

From gloves, Seven Sea expanded into other latex products such as pacifiers, school supplies, latex sacs for fountain pens and others. The firm also started making and selling the Sea Horse brand of foam in the 1970s which were used in furniture, jackets, air conditioners, packaging materials etc. and produced its own foam sofa and bathroom mat in 1977. At the time, foam was a HK$30 million a year business in HK alone (not counting exports) with 6 players. (WKYP, 1977-9-20) Outside of HK, Seven Sea was involved in setting up latex factory in Mauritius in around 1972 to tap the African market and was also invited by the Malaysian government to set up latex plant there.

Outside of Seven Seas, Leung Wai-sin was very active in community affairs in HK and according to her bio in 1977, she was the founding chairperson of the Lai Wan Kaifong Welfare Association and the HK & Kowloon Female Sports Club, chairperson of the owners associations of three buildings – the Grand Industrial Building and Victory Industrial Building (150-156 Wo Yi Hup Road, where Seven Sea had its plant) in Kwai Chung and Good Hope Building in Mongkok and was on the board of Po Leung Kuk and the New Territories Women and Juveniles Welfare Association. (WKYP, 1977-4-18) Her son James Wu Yu-ching (鄔友正) joined the family business after graduation from the California Institute of Technology (Caltech) with a M.S. in mechanical engineering in 1977.

In 1980, Seven Seas added a new plant at the Wing Foong Industrial Building on Sha Tsui Road in Tsuen Wan equipped with state-of-the art machinery imported from West Germany which had ten times the productivity of the original plant and James was placed in charge of the factory. The same year, firm also opened a new retail outlet on Fa Yuen Street in Mongkok and entered the hotel, real estate and latex business in the US. (WKYP, 1980-5-18) By 1982, Seven Sea was doing over US$1 million a year in sales but suffered two devastating fires that year. James assumed the leadership of Seven Sea in the 1980s and took it to the next level by shifting its focus to mattresses and furniture.

In 1987, Seven Sea launched the Sea Horse brand of mattress as a lower cost but high-quality alternative to coil mattress and Solar Way Ltd was also incorporated the same year (renamed Seven Sea Chemicals Holdings in 1989). To promote the Sea Horse mattress, the firm invested millions in print and TV advertising and signed TVB star Liza Wang as its spokesperson in 1988, a powerful partnership which has lasted for over three decades. The combination of successful product and promotion strategy paid off and in 1989, Sea Horse became the top selling mattress brand in HK for the first time, a record it has held for the past three decades with up to 70% of market share and over the years the brand had won many awards including “HK Superbrand” and “Top 10 Brands”.  In 1990, James Wu received the Young Industrialist Award and in 1991, Sea Horse became the top selling pillow brand.

In 1992, Seven Sea Chemicals formed Cosmo Polyurethane (HK) Ltd (宇宙聚氨酯) in partnership with the Japanese firms Nisso Shoji and Mitsui Chemicals. The joint venture was later dissolved in 2003 but Seven Sea maintains strong ties with other industry giants such as Dow Chemicals.

In 2015, Seven Sea began the development of a massive production plant on a 2.3 hectares plot in Hai Phong in Vietnam, which opened three years later in 2018 to manufacture mattresses and furniture for export to China, HK, Singapore and Macau.

Sources (other than what’s those above):

This article was first posted on 6th January 2020.

HF: Rubber and latex are not the same, but many people use the words as if they both referred only to natural rubber, which is the material derived from the milky white sap of rubber trees.  As we do not yet have any other articles about latex I am including here those we do have about the manufacturing of rubber products in Hong Kong.

And here are Indhhk articles regarding Hong Kong companies involved in chemicals: