“Hsu Long Sing” is a familiar name on the campus of the University of Hong Kong (HKU) as the Hsu Long Sing Amenities Centre where the HKU Student Union is located is named after him and the Hsu Long Sing Research Fund at HKU’s Faculty of Arts had supported many research and publications in Chinese studies since its founding in 1979. Hsu Long Sing (1900-1978, also known as Hsu Mei-sheng 徐微生), the industrialist whom the two entities were named after, was a major player in the enamelware industry, first in Shanghai and later in HK, Thailand, Bangladesh and West Africa through his KiuFoong Enamel Factory, which was known for its “Cock” “Crown” and “Eagle” brands of enamelware.

From Shanghai to Hong Kong

A native of Jiaoxi county in Wujin prefecture of Jiangsu province (江蘇武進焦溪), Hsu graduated from the Wusih School of Commerce (無錫工商專科學校) in 1920 and established a lumber store in Wuxi. He did not enter the enamelware industry until1932, when he teamed up with Y.S. Tai (戴耀臣), H.S. Tung (董和笙) and F.W. Tu (殳鳳梧) to establish May Foong Enamel Factory (美豐珐琅廠) in Shanghai to produce enamel powder (琅粉) as a supplier to enamelware manufacturers. In 1935,Hsu and Tu (a graduate of the Chinese Vocational School in Shanghai and technician of the firm) raised 20 million dollars (KMT currency) and re-organized May Foong asKiuFoong Enamel & Aluminum Co Ltd with factory on Hart Road in Shanghai. Starting with 2 kilns, KiuFoong eventually expanded to 5 kilns and became one of the leading enamelware manufacturers in Shanghai by the 1940s with many of its products exported overseas.

In 1946, KiuFoong acquired McGregor Iron Works (广大), a British-owned enamelware manufacturer in Shanghai founded in 1923 by J.H. McGregor and controlled by the Jardines group at one time. McGregor was a pioneer in the Chinese enamelware industry, having established the first enamel factory in China in 1916 and co-founded McGregor Hsu Enamelling with Chinese merchant T.S. Hsu (徐道生) in the late 1910s.

As the Civil War situation deteriorated in the mainland in the late 1940s, Hsu decided to leave for Hong Kong in 1948 to open a branch factory there and left the management of Kiu Foong in Shanghai to his nephew Hsu Kuo-chieh (徐國杰, the business in Shanghai eventually became a private public enterprise under Communist rule). The HK entity, Kiu Foong Enamel Factory (HK) Ltd, was incorporated in March 1948 with HK$2 million in capital and the factory opened in August 1948 with three kilns. By early 1949, production was expanded to six kilns with plans to go up to nine and the 60000 sq ft factory in Lot 445, Tsuen Wan had 350 workers – 30 worked in the office while 320 were factory workers – out of which two third were Shanghainese and one third were Cantonese women. The monthly wages was $60-70,000 with average salary of $200-250. Monthly production was 1500-1800 boxes with each box worth HK$300. The HK factory picked up most of the export markets which the Shanghai plant was catering to, with South Africa being the top market followed by Middle East, Thailand, Singapore, the Philippines and members of the British Commonwealth. The net profit margin was around 10 percent, while the cost breakdown were as follows: labor 20% metal 30%, other raw materials 9%, enamel powder 20% and factory operating costs 10%. 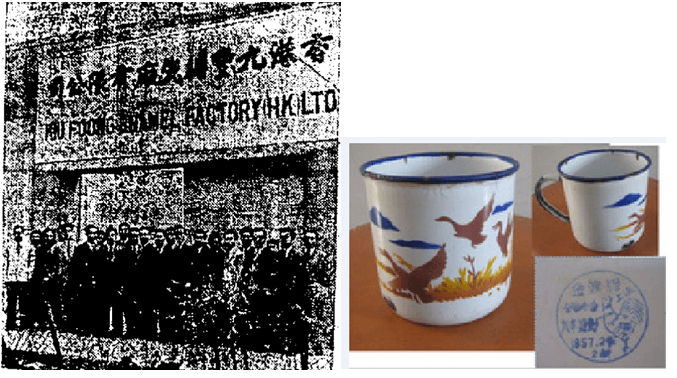 Business in the later part of 1949 was tough however, resulting in Kiu Foong having to lay off 66 of its workers in December that year. Business picked up in 1950 with all six kilns in operations and 80 boxes in daily production but went south in 1951 thanks to sharp increase in material costs (ranging from 50% to triple) triggered by the eruption of the Korean War and strong competition from Japanese enamelware manufacturers who were subsidized by its government with lower electricity and material costs. By 1953, Kiu Foong was only utilizing three of its six kilns with monthly production of 1000 boxes priced at $200-250 (dropped by a third from 1949, this was the result of an agreement between all HK enamel manufacturers to make their price lower than their Japanese counterparts). Its workforce had shrunk to 180 workers, of which most of the technicians were Shanghainese while the other workers in packaging and other less technical roles were Cantonese and the daily wage ranged from HK$5–13. By that time, Kiu Foong was producing 40 different types of enamelware products including bowls and cups for cleaning, bathing and dining purposes. 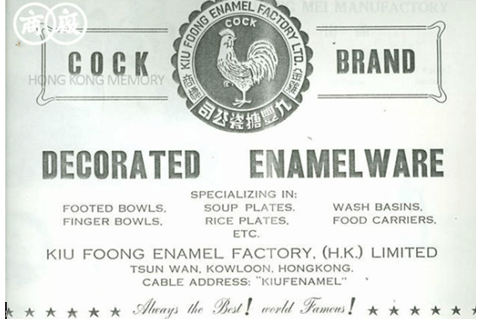 In 1954, Kiu Foong won the bid for a 53,750 sq ft plot of land in Tsuen Wan in a government auction attended by over 100 bidders for $225,000, which was more than four times the starting bid. In the late 1950s, overseas markets began to impose restrictions on imports of HK enamelware and as a result, the number of enamelware makers in HK dwindled from the peak of 34 to 16 by 1958. Coupled with the rising costs of production in HK (for example, workers at Kiu Foong and nearby Ting Fung Iron Works went on strike in August 1963 to demand for higher salary and production only resumed after a raise of $0.50-1 per day was approved), many enamelware makers began to move its production overseas, with Southeast Asia and West Africe being the key destinations. 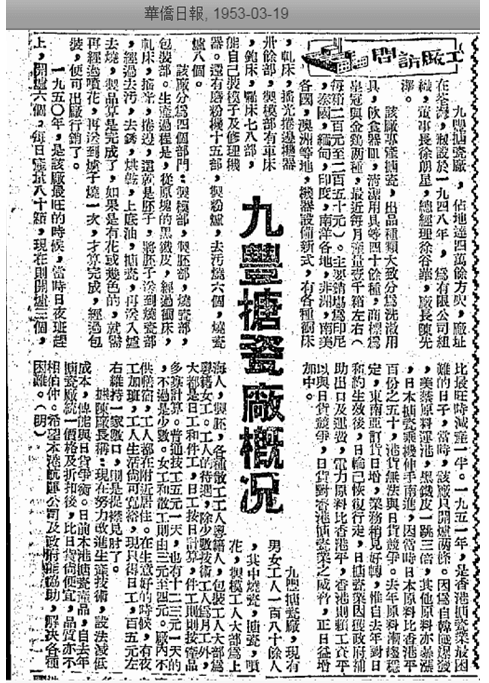 KiuFoong’s overseas expansion began in 1960.In 1962, KiuFoong together with H.O. Chen bought 40 percent of C.V. Bhatt in Colombo, Sri Lanka to make enamel hollowware. In 1967, KiuFoong formed Nouvelle EmaillerieSenegalaise (NEMAS) in Dakar, Senegal with 75 million francs in capital with Kiu Foong and Crown Investors Ltd each controlling half of its equity and George Chang as manager.Over time, other factories were also opened in Thailand, Mali, Bangladesh, Pakistan, Jamaica and Australia, most of them under the name of The Sing Enterprises (德星企業). KiuFoong International Ltd was incorporated in 1969 as a holding company for the overseas investments. In 1966, KiuFoong joined forces with four leading HK enamelware manufacturers – I-Feng, New China, Far East and Hong Kong (the first two covered in earlier articles, the last two to be covered later) – to form Enamelware Alliance Co Ltd (联業搪瓷廠). Hsu Long-sing himself had served as supervisor of the HK Enamelware Manufacturers Association.

Hsu Long-sing (seated second from right) signing contract with William Mallett of Otis Elevators (seated second from left) for the proposedKiuFoong Industrial Centre in 1970. To Mallett’s left is Poon Hin-sau, architect of the building and to Hsu’s right is Howard Hsu. Centre in the back row is Poon’s colleague Kenneth Ko Man-on, later known as the father of interior design in HK. (WKYP, 1970-6-25)

In 1970, KiuFoong hired the contractor Gammon for HK$1 million to begin foundation work for re-development of its factory site at Yeung Uk Road in Tsuen Wan into a 10 story, 540,000 sqft industrial building (to be named KiuFoong Industrial Centre) with themselves occupying the first two and top two floors and the rest rented out to other manufacturers. For whatever reason, the project which also involved the architectural firm of Poon Hin-sau and Otis Elevators, did not appear to have been completed.

Outside of work, Hsu Long-sing was a generous philanthropist who had supported many causes such asthe schools operated by the Kiangsu-Chekiang Residents Association (he served on the executive committee of the Association). When his sons threw a joint 70th birthday celebration for him and his wife in early 1971, he donated all the birthday gift proceeds to the Community Chest and the Kiangsu-Chekiang Residents Association clinic. He was also supervisor for the Tsim Sha TsuiKaifong Welfare Association and permanent chairman of the Tsui Family Association.

On May 15, 1978, Hsu Long-sing died in Hong Kong and was succeeded by his two sons. His eldest son Howard Ku-Hua Hsu (徐谷華) had worked in the family business since the 1940s as managing director of KiuFoong and served as a director of the Tsuen Wan Chamber of Commerce in the 1950s. He was also a key figure in the firm’s overseas expansion in the 1960s and became an Australian citizen. His second son James Hsu (徐晉華) managed the Sing Enterprises in Thailand, which in 1973 was considered to be the largest enamelware producer in Thailand with workforce of 400. In 1979, the Hsus incorporated KiuFoong Enamellers Ltd (九豐搪瓷工業) in HK which had its office out of Star House in Tsim Sha Tsui and factory in the Tai Po Industrial Estate.

In the second half of 1980s, several of the major Hsu family enterprises in HK were struck off the companies register -KiuFoong Enamel Factory (HK) Ltd, The Sing Enterprises (HK) Ltd, KiuFoong International and KiuFoong Enamellers were dissolved in 1986, 1987, 1988 and 1990 respectively.

While KiuFoong have faded away from the HK business scene, the Hsu family’s philanthropy continued to benefit many in HK and China. In 1979, the Hsu brothers donated HK$2.5 million to HKU for the formation of the Hsu Long Sing Research Fund to support the development of Chinese studies in memory of his father.He also donated RMB300,000 in the 1980s to build water plant, middle and primary schools in his ancestral home of Wujin. In 1986, the 3 story Hsu Long Sing Amenities Centre was opened at HKU by James Hsu and HKU Vice Chancellor Rayson Huang. 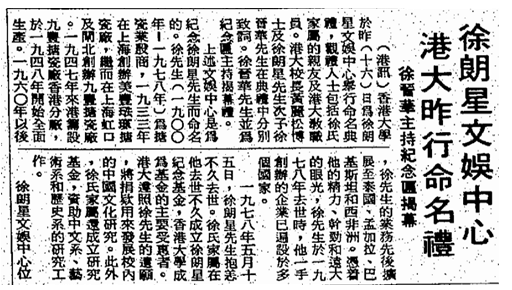 Article about the naming ceremony of the Hsu Long Sing Amenities Centre at HKU which included a brief bio of Hsu Long Sing(WahKiuYat Po, 1986-3-17) 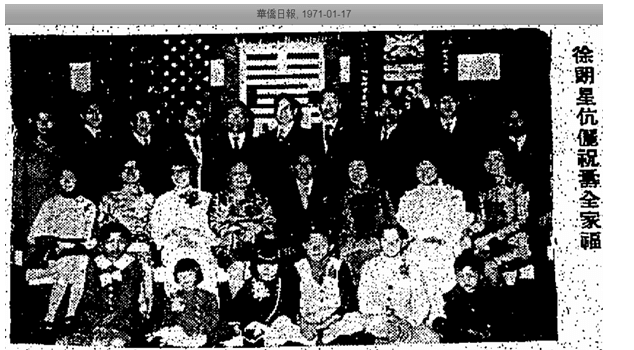 This article was first posted on 5th October 2018.