During WW2 CLP’s Hok Un Power Station was damaged both by Japanese and allied bombing. In December 1941 it was taken over by the Japanese at the start of their occupation.

Thanks to John Smith and Mark Regan for retyping the reports – some of which are barely legible as can be seen with the first one.

If you could help the Group by doing the occasional typing please contact us. This also aids reader’s ability to search.

Many thanks to John Smith for retyping this report:
WIS 25.4.43 China Light & Power Co: The New Generating Station was put out of
Order on the fall of Kowloon. All the governors and (illegible) were dismantled from the
machinery in the old station, and it was originally intended to take all these to the middle of the harbour by launch and dump them. Owing to the shortage of time, they were only
thrown over the sea wall. This act was seen by some of the Chinese workmen who later guided the Japanese to salvage there. The station now working with 1/3 former staff. Coal stock at present is sufficient  to last till middle of August. Output of 7,000 K.W. is the peak load and occurs during the day. The peak load at night is from 8-9 p.m. and is 4,000 K.W. Formerly, the peak load occurred from 9-10 p.m. and was 15,000 K.W. The only
Japanese staff on the premises in addition to Military Guards is as follows:-

The remainder of the staff is Chinese. No Chinese quarters are on the premises. All the Japanese stay at former European quarters.

Many thanks to Mark Regan for retyping the following reports:
KWIZ #76 24.11.44 Two small generators remain working in the China Light and Power Co. Station (22365684). Electricity is supplied only to the Kowloon Docks and the Green Island Cement Works, each of which receives 3 days of power in the week. This power station has been allotted 47 tons of coal from Formosa, and on 5th November had about 2,000 tons of coal in stock.

IDJ on the above report (KWIZ #77): I would suggest the “HK Electric Factory” is Hok Un Power Station as I seem to recall reading something recently that Hok Un was supplying electricity to Hong Kong Island via the undersea cable during at least part of the war years. North Point power station suffered badly during the battle for Hong Kong and was probably not capable of generating electricity.

In 1945 a group from an RAF contingent were assigned to Hok Un Power Station and successfully managed to restore basic electricity supplies. 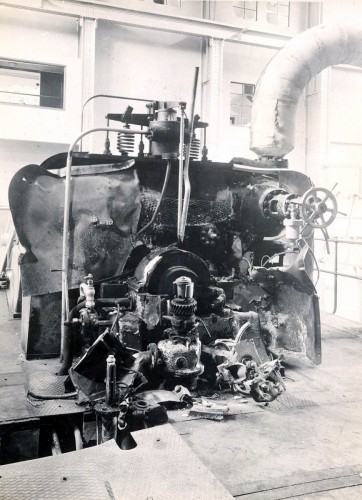 The image shown on the Home Page of this article is of CLP’s Hok Un Power Station in October 1945. Courtesy: IDJ

This article was first posted on 18th December 2014.

The Index contains many articles showing BAAG articles about Hong Kong during the Japanese occupation. Look under World War Two.