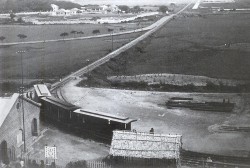 Tymon Mellor has sent  this photograph of the railway line and station at Fanling. This shows proper passenger carriages unlike the flat, open waggons shown in the image below.

HF I had heard about this almost forgotten branch of the Kowloon Canton Railway but knew almost nothing about it. The line operated for exactly 16 years from 1 Apr 1912 to 1 Apr 1928, unless the source  is pulling my leg, twice. It ran from Fanling Station to Sha Tau Kok.

Apparently the area formerly occupied by the terminus in the latter place is still called the train station or fo cha teu in the local dialects (火車頭 huochetou). Gau Keung says in the comment below this article that “the characters 火車頭 do  not mean train station. It means literally “train head” or the first car in a train, which is usually the locomotive, or the car that contains the engine of the train.” 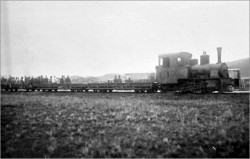 A steam engine on the narrow-gauge Sha Tau Kok branch line, which operated between Fan Ling and Sha Tau Kok during the period from 1912 to 1928.
http://www.kcrc.com/en/about/history2.html

I think I read at the Tai Po Railway Museum that the railway line preceded a road.  A quick check on the surprisingly detailed Wikipedia page suggests, “In 1924 the Hong Kong Government decided to extend the existing motor road from Au Ha to Sha Tau Kok. The line ceased operation … due to competition from motor vehicles using the recently completed Fanling to Sha Tau Kok Road.” The webpage below suggests some of the old rails and a tunnel can still be traced through the dense foliage of the countryside today. Where exactly?  The tunnel shouldn’t be hard to locate if still there. 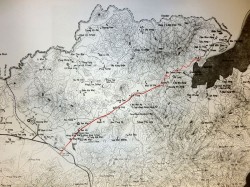 Here’s the map from wikipedia

IDJ has very kindly sent his own photographs and this information:

“These are images I took of the surviving KCR Fanling-Sha Tau Kok narrow gauge railway locomotives when repatriated to Hong Kong from the Philippines. The location was the Fo Tan depot one Sunday in 1995.

The locomotives had been in use on sugar plantations in PI for decades and were accompanied by their ‘balloon’ smoke-stacks which had been used to catch sparks from the Bagasse waste they burnt as fuel. Their very large tenders designed for Bagasse also came with them. These had not been used on the railway in HK and were probably scrapped by the KCR. It was interesting that the locomotives and their accompanying bits and pieces were not strapped down in the containers in any way. I understand that the consignment was listed as scrap metal on the shipping manifests rather than what they really were.

There was an intention to restore one to working order in HK and the other for static display. With subsequent management changes at the KCR, the restoration to working order never happened. After languishing at Fo Tan for several years it was donated to a narrow gauge railway in Wales catering for tourists. Of course the other is in the Railway Museum at Tai Po stuffed and mounted.” 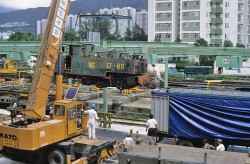 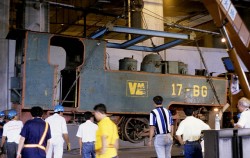 Unloading from a truck inside Fo Tan depot 1995 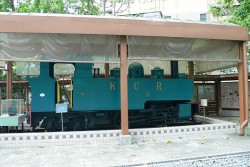 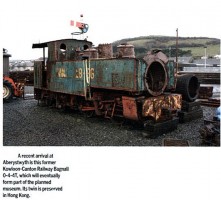 HF: This extract comes fom A look back : Civil Engineering in Hong Kong 1841-1941, by C Michael Guilford, originally published in three parts in Asia Engineer, the Journal of the Hong Kong Institution of Engineers in July, August and September 1997.

This article was first posted on 8th September 2014.