Hugh Farmer with thanks to IDJ  and Tymon Mellor for information and images. These come from The Engineer, 28th April 1911:-

“The Beacon Hill Tunnel – Kowloon Canton Railway.
Beacon Hill, about 1500ft in height, is part of a range of hills dividing Kowloon from the rest of the mainland. A tunnel through this hill was deemed necessary in connection with the railway from Kowloon to Canton, a distance of 100 miles. By reason of the Colony of Hong Kong being so intimately concerned with result of this project, the British Government undertook the construction of 23 miles of the line from Kowloon, the Chinese Government being responsible for the remaining length of the line to Canton.

This tunnel, which was completed in the early part of 1910, is of interest in that it is the longest existing tunnel in China, and the rate of progress compares favourably with tunnel construction in other parts of the world.”

Operations for the construction of a single-line tunnel of standard gauge were commenced towards the end of 1906. The tunnel is straight, 7,212ft.long, and is approached from the south by a two and a half degree curve.” 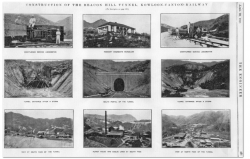 And this image has a different source: – 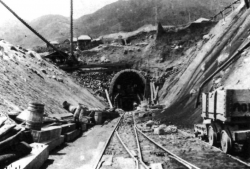