Hugh Farmer: Thanks to Tymon Meller for notifying me of the following:

A short report by James Hayes which appeared in the RASHKB Journal Vol 15, 1975 :

I had come to discover a little of the history and archaeological discoveries of Wun Yiu which was for a long period a major centre of the porcelain industry in the New Territories. The entire area involved in the complete process of producing porcelain is extensive, spreading over 50,000 square metres and covering the villages of Sheung Nun Yiu, Ha Wun Yiu, To Chi Yin, Chueng Uk Tei and areas at Dui Liu and Da Nai Dong.

A government document “Report on the New Territories 1899-1912” records that Wun Yiu produced 400,000 pieces  a year. Most of these were exported to Danshui in Guangdong though some were sold locally. Examples of kendi, a type of water vessel commonly used in both Hindu and Islamic cultures have also been found at the site. Furthemore, Wun Yiu type ceramics have been found at various archaeological sites  and shipwrecks in south east asia. A major centre then.

http://www.amo.gov.hk “As early as the Ming dynasty (1368-1644), clans of Man and Tse had started manufacturing the blue and white porcelain. The Ma clan, a group of Hakka people originated from Changle county in Guangdong province, settled in Tai Po and purchased the kilns from the Man clan in 1674 (the 13th year of Kangxi reign of the Qing dynasty). The industry declined in the early 20th century due to the competition from good quality and inexpensive porcelain produced by other coastal kilns in Guangdong. The kilns at Wun Yiu finally ceased to operate in 1932.

At Sheung Wun Yiu immediately above Fan Sin temple is  part of the site enclosed in a green, wire mesh fence  with several padlocked entrances. I walked around the fence which I suppose is about 250 metres long. There is a huge amount of  porcelain lying both within the fence and outside so that at points I appeared to walking only on this debris.  The image below clearly shows this. 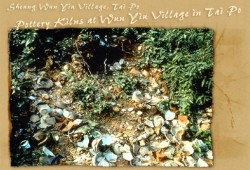 At the point closest to the temple is the  only clearly visible sign that I saw of the production processes. Namely a circular grinder shown bottom right below. This is 3.93m in diameter and is made of 14 pieces of grooved granitic slabs. At its centre is a rectangular stone pillar. There is also a stone roller of 0.85m diameter, which was probably driven by an animal (too cramped for a buffalo?) to crush the clay stone into powder. 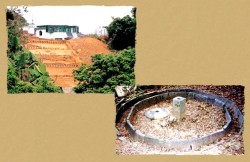 I did not explore the area other than my circular walk around the fence. However, further enquiries show that at this location, particularly above the fenced site, there are the remains of quarrying pits, clay-soaking tanks, water mills, and several “dragon”  kilns.

No doubt the Hong Kong Archaelogical Society will be able to provide considerably more professional and detailed information than my very amateur walkabout.