This article is an attempt to bring together what we know about Japanese suicide boats based on Lamma Island at the end of the Japanese occupation of Hong Kong. There is also mention of such vessels appearing in other locations.

The subject may appear to be drifting somewhat from HK’s industrial history. However, as the BAAG Report KWIZ #79/1 indicates these boats were constructed in Hong Kong,  or at least were adapted for their single journey purpose, and therefore qualify for inclusion.

The so-called Kamikaze Caves or Tunnels on Lamma Island are reasonably well known in Hong Kong. They cannot be missed if you walk the popular trail  from Yung Shue Wan to So Kwu Wan as they are clearly visible next to the path near the latter. 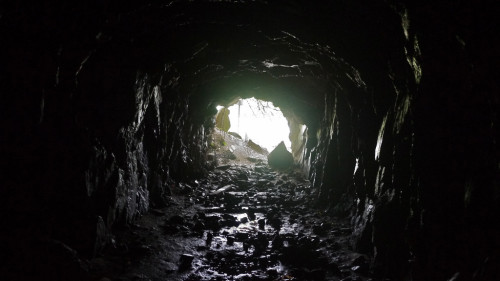 Elizabeth Ride introduces the subject with this BAAG report:

KWIZ #79, 29.12.44:  “Suicide surface craft.   Various shipyards in Hongkong have received orders to build motor speed boats called “Despatch Boats” or “Surface Flying Mines”. These are of all-wood construction, 15′ in length, and fitted with diesel engines.  With a one-man crew and explosives loaded in the bow, they are designed for suicidal attack on enemy shipping.  They will be carried on transports”. 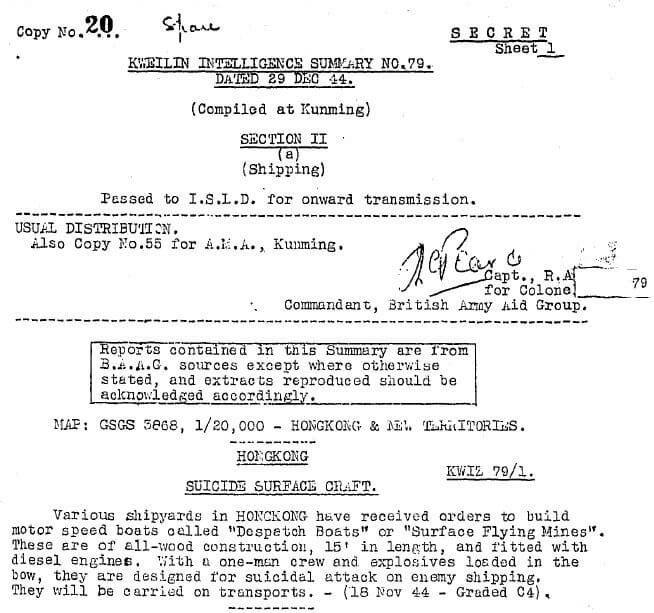 Our article, Lamma Island Industry, linked below contains this information from gwulo.com:
“The only references I can find that come from near the time they were built are these two:

These two aircraft carriers were part of the fleet that sailed to Hong Kong to accept the Japanese surrender, and re-establish British control. It’s not clear how they knew of the Japanese explosive boats, and whether those boats were stored in these tunnels or not.” (1)

ER: The Imperial War Museum, UK, has a film (Catalogue number: ADM 1196) : Surrender at Hong Kong: British Naval Operations in the Far East, production date – 16th September 1945. Reel Two, No. V1 is of, “Picnic Bay: [Lamma island] Sequence shot from small craft on the waters of Picnic Bay – LSs of Japanese Shinyo suicide craft pulled up on the beach.” (2)
Some time ago I recommended this to HKU Special Collections which it acquired.
HF: Unfortunately, I have been unable to watch this film extract either at IWM or HKU.

ER has also sent this SCMP article which comes from her father’s collection of newspaper cuttings. She says she “seems to remember the fleet came in by Lyemun Pass (the Eastern entrance to HK Harbour).  The article is a little unclear as to whether they were attacked before they came into the harbour, but it seems to say ‘as we approached Hongkong waters’, so the boats could have come from anywhere.” (3) 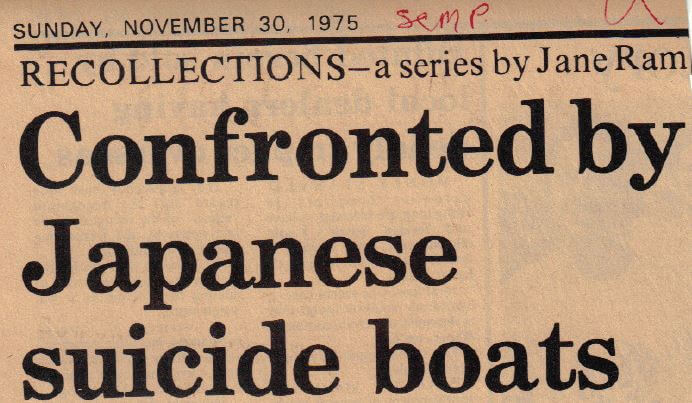 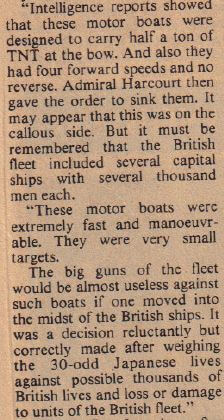 ER:  I have also found that Admiral Harcourt mentions an encounter with suicide boats in his War Diary (NA CO 371/46258). I attach a scan of the appropriate page, 30th August. point 8. It is a different attack from that described by Lore, but he mentions that there was one attack by three boats ‘on the western entrance’ [to the harbour] presumably as coming from boats from Lamma, which were later bombed by a (naval?) air patrol.

HF: The Imperial Japanese Naval Page website has an article on Explosive Motorboats based at Hong Kong, 1945. This includes the information that: On 11 September 1945, The China Mail reported that during the round-up of Japanese forces, men were found on Stonecutters Island who had been organised into a suicide squad operating miniature torpedo boats. The newspaper also reported that ” a considerable number of craft were found at Stonecutters.” It is unclear if there were locations other than Lamma Island for the concealment of EMBs, or if the correspondent incorrectly stated the location as Stonecutters Island and not Lamma Island. (4)

Bob Hackett the co-author of this article has been in touch and says he is unsure of the sources used in writing it but that they would be books, magazines and from the web. 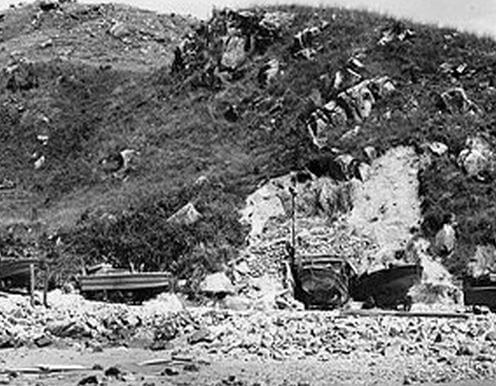 The website also suggests: Several “Shinyo” EMBs were found in the Hong Kong Dockyard but they are “home made” and powered by engines from old British-built buses that ran in the Colony before the war.

HF: In 1995 a group of Japanese, who wanted to learn about their country’s war record, visited Hong Kong . “This included a visit to the “kamikaze caves” on Lamma, where apparently the Japanese army forced local residents to dig caves to hide their “suicide attack boats” and then killed them to ensure secrecy.” (5)

I asked Ko Tim Keung whether he could verify this accusation. He replied, Regarding the construction of the Kamikaze caves, I only vaguely rememember it was mentioned in a Chinese book (香港古今?) about the killing of those who worked on it. Further investigation is needed and I think it’s a worthwhile study as the construction work was a major undertaking. The number of caves should be more that we see now.

This article was first posted on 26th September 2015.