HF: This article is the result of several people’s research into Ma On Shan Mine.

If you can provide further information about this or any other mine or quarry please email me at:
indhhk at gmail dot com

Ma On Shan Mine operated for 70 years from 1906 to 1976. A  lengthy history then. And of great significance in HK’s Industrial History as it was surely its largest mine.

Various companies have been involved.

In 1931 The New Territories Iron Mining Co. Ltd received an exploration lease and mining lease lasting for 50 years. They were later transferred to Mutual Mining and Trade Co, [date not stated]. (6)

There appears to have been Japanese involvement during the occupation of HK in WW2.

ER: A British Army Aid Group report, WIS #28 dated 25.4.43, reported that “the mine has been re-opened.  Steamlighter ‘Cheong Ming’ left for Mine 15 Apr. to carry ore back to Hongkong. Capacity of lighter about 150 tons -length 110ft., breadth 22 ft., draught 18ft”. To which has been added in handwriting ” Confirmation being sought”. HF: I’m not sure what this means. “To carry ore back to Hongkong”? Should that be “from” HK. Or that the ore was brought from the mine to a place within HK?

All operations up to 1949 appeared to have involved small-scale opencast mining.

After 1949 operations increased in scale when the Mutual Trust Company became involved. 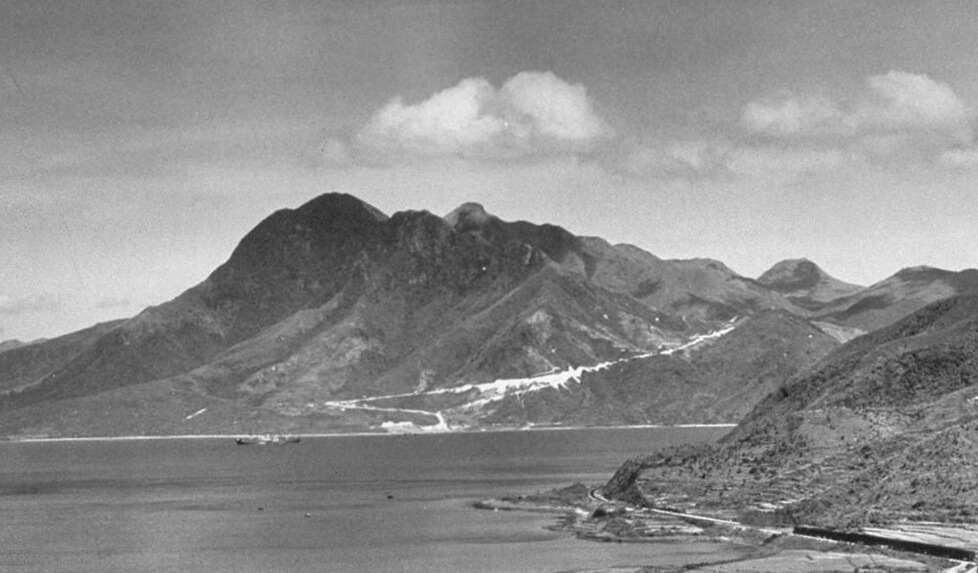 This photograph from 1949  is  looking SE across Tolo Harbour with the KCR railway line clearly shown in a cutting below where Chinese University is today and what I presume is a train in the bottom right hand corner. In the distance is the  Hunchbacks (Ngau Ngak Shan) mountain with the peak of Ma On Shan appearing behind and just to the right.

The white scar coming down from the valley to the SW of the Hunchbacks and Ma On Shan is almost certainly connected to Ma On Sha mine. A ropeway was constructed as part of the operation, but is the scar or a road(s) or both? And what are the buildings which can be seen at sea level just to the left of where the scar comes down to the sea. The processing plant mentioned above?

By 1953 the iron in the middle and upper levels was starting to deplete. Mutual Mining and Trade Co. co-operated with Nittetsu Mining Co. Ltd from Japan to start underground excavation.(6) At this point the volume and quality of production was greatly increased and improved with the introduction of more modern Japanese mining techniques including an ore-dressing plant, upgraded transport and mining facilities generally.

Mining had moved entirely underground by 1959.

Major development work occurred in the 1960s, after all the reserves in the upper levels had been exhausted. 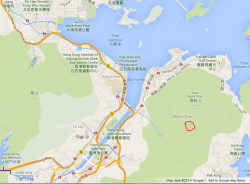 By 1963, 5,458 metres of main tunnels and shafts and 3,000 metres of sub-levels, including 5 main ore passes, had been constructed. A 2.2 kilometre long haulage drive was built at the 110 metre level, with a new portal near the processing plant only 200 metres from the coast.

“Ma An [sic] Shan in the new territories, Hong Kong’s only iron mine, employed about 650 workers in 1963. Mining from this contact metamorphic deposit was started from the surface but had gone underground. The ores were being magnetically upgraded from 32 to 56 percent iron in an 800-ore-ton-per-day wet concentrator. About one-fifth of the production came from handsorted dump recoveries. Technical assistance was provided by the Japanese, and all production was exported to Japan. Output was expected to double after opening a mile-long tunnel in October 1963, extending to the orebody bottom.” (5)

HF: The photograph below is from 1971 and is looking south west up the Shing Mun river  where present day Shatin is located. The mine is at the top of the road winding up to the top left.  This is the first aerial photo I have seen showing, if unclearly, what happened down at sea level.

Is that an artificial jetty pointing towards the top or a natural feature? A pier/jetty can be seen jutting at right angles out.

Two areas are of interest to me. First is the whiteish flattened area to the left of the mine road as it rises which I presume is connected to the mine. Secondly, the area below the jetty running along the seashore. This appears to  linked by road(s) to the mine road/jetty junction.

Many thanks to IDJ for lightening the original photograph so the roads and related works can be seen better.

Maps showing a) surface buildings at the mine head and b) the whole operation down to sea level, would be very useful. 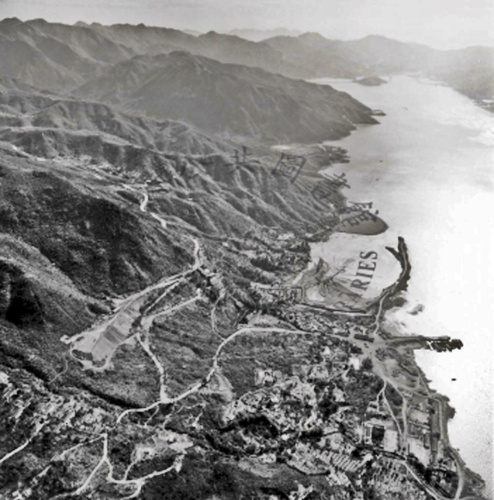 During the mid-1970s, a worldwide decline in the demand for steel, the opening up of large iron deposits in Australia, and the termination of a contract to supply Japan, led to mining being suspended in March 1976. The workforce of 400 was laid off.

The mining license/lease expired in March 1981 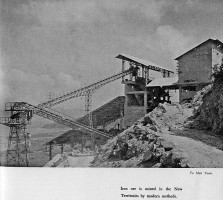 As indicated by the photograph above of the headworks in the 1950s the mine was, at least for Hong Kong, a major operation.

Ma On Shan mine is relatively easy to get to. The external remains can be inspected, including at least some of the pillars that supported the ropeway. And it is possible to go underground. Here are some sites which provide further details about the mine and show what remains both above and below ground:

Please note: Concealed mine shafts and man-made scree slopes are potentially dangerous and the area around the mine should be explored with care. Going underground can be even more dangerous.

http://www.mos.hk/book_onshan/newpart2.htm This is a full history of the mine with lovely photos of the construction, unfortunately its all in Chinese and the google translation is poor, however the photos are great, but low quality.

http://blog.xuite.net/lisalam/notes/10359603 mine maps and photos of people exploring the mine

http://www.youtube.com/watch?v=etkCaId5spE an interesting film about the mine. A rather poor quality copy. The original can be seen at the Ma On Shan mine permanent exhibit in the NT Heritage Hall at the HK Heritage Museum, Shatin. Doris Chan, Assistant Curator of the museum has written to say that the film was specially produced by the museum to show in the exhibition gallery and that it is not possible for the group to have a copy.

This article was first posted on 30th August 2014.

More articles about Ma On Iron Shan mine: