Following the signing of the agreement with China on the 9th June, 1898 to extend the Colony of Hong Kong, a survey was undertaken of the “mainland and islands adjacent to Hongkong” that had been leased to Great Britain. Over the summer of 1898, Mr Stewart Lockhart, assisted by the naval authorities with H.M.S. Plover led a Commission to survey the new territories. His report dated 8th October, 1898 provided a detailed account of the territory and a fascinating insight into what had been a rural Chinese community. The survey covered the area to the north of Boundary Street, including the Kowloon foothills and what is now referred to as the New Territories and the outlying islands. This being a total area of around 376 square miles, with 423 villages and a population of around 100,320. There were no reliable Chinese Government statistics available but information was gained from inquiries and additional details provide by a Chinese Customs officer stationed on Cheung Chau. The report established inhabitants as one of three groups: Puntis – or Cantonese originating from the south of the Yangtze river, settling in the territory from 1127 AD to 1278 AD, inhabiting the valleys focused on agriculture and trading and “full of that enterprise for which as a race the Cantonese are so justly famous.”; Hakkas – descended from the Mongols arriving in the middle of the 14th century, a “hardy and frugal race”, located in the hill districts, with their chief pursuits being agriculture and quarrying; and Tankas – or boat people of unknown number, living on boats and engaged in fishing. The general distribution of the population is shown on the map below: 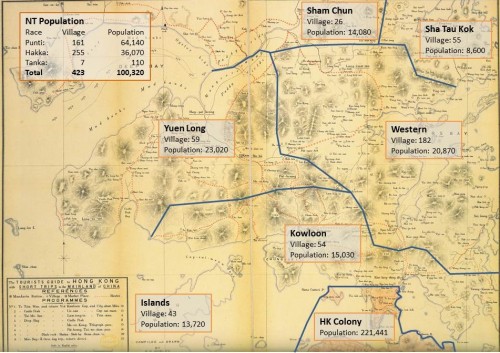 The major areas of populations were: Cheung Chau  with 5,000 inhabitants, Shatin & Tai O with 3,000, Kam Tin with 2,400 and San Tin, Ping Shan, Ha Tsuen with around 2,000. The survey also provides some information on the mineral resources identified and noted that there was excellent pottery clay on the slopes of Tai Mo Shan, used by the village of “Un-iu” [Wun Yiu – Tai Po] to create pots “of a light brown colour and extremely fine texture.” Brick clay was also found in many of the valleys and use to form sun-dried bricks for building houses and walls. A lead mine was identified on Tai Mo Shan but this had been closed some six years before the survey. Galena or lead ore was found near Kowloon and on the north side of Lantau and “elsewhere“. Alluvial tin was report along with the silver and lead on the south side of Lantau. The report concludes, “In conclusion, it may, I trust, be gathered from the account of the new territory that it will form a valuable extension of Hongkong. It is favourably situated, has good harbours with safe anchorages, possesses a rich soil, and is inhabited by an industrious, hardy, and frugal race. Under Chinese rule enterprise has been at a discount, and progress has been at a standstill for centuries. The San On district [San On being the district of Guangdong being leased to the British]of to-day must be much the same as it was four or five hundred years ago. But when British rule is established, and the people realise that justice prevails, that they are allowed to pursue their avocations in peace and freedom from illicit extortions, and that there is no unnecessary interference with their manners and customs, the spirit of enterprise will soon manifest itself, capitalists will be attracted to the region where their capital is not liable to official ‘squeezes’ the resources of the country will develop, and its prosperity will continue to increase.” Source: Report By Mr Stewart Lockhart on the Extension of the Colony of Hongkong http://sunzi.lib.hku.hk/hkgro/view/g1899/628777.pdf Mapping Hong Kong a Historical Atlas, Hal Empson