HF: This KMB timeline comes from the company’s website. The story begins…

By the time of the Japanese occupation in December 1941, KMB had 140 buses operating on 17 routes. With its buses requisitioned by the occupying force, KMB operations came to a virtual standstill, with just two routes still running in 1944. By February 1946, in order to resume a full service to the community as soon as possible, KMB converted some second-hand military trucks to carry passengers. At the same time, the class seating was abolished.

After the war, the population of Hong Kong soared. To handle the increased demand for its services, KMB supplemented its fleet with 20 Daimler A buses from England, becoming in the process the first bus company to introduce double-deckers to Hong Kong.

KMB established bus stops on all its countryside routes on roads where previously passengers could get on or off buses as they wished. One year later, the Daimler A buses were fitted with front doorways and sliding metal gates, operated by conductors. 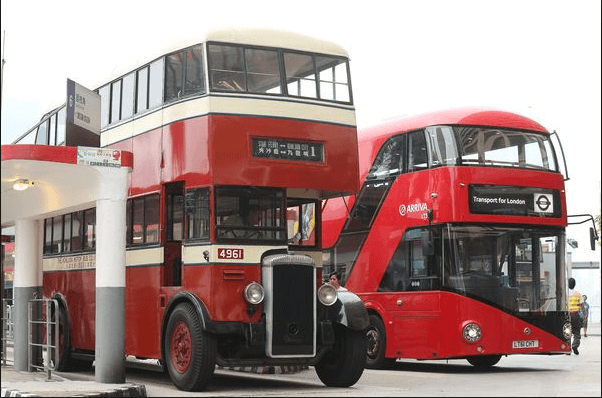 …and ends in 2014, KMB continued to strengthen and enhance its bus route network through bus route reorganization that was successfully implemented in Yuen Long, Tai Po, Sha Tin and Tsing Yi.

As a sign of continuously upgrading the fleet, KMB retired the last batch of air-conditioned buses with the “3+2” seating layout. After the retirement, all KMB buses have the wider “2+2” layout of seating. Furthermore, the first of KMB’s new 12.8-metre buses, the longest bus in Hong Kong, entered passenger service in August, serving Route 73X.