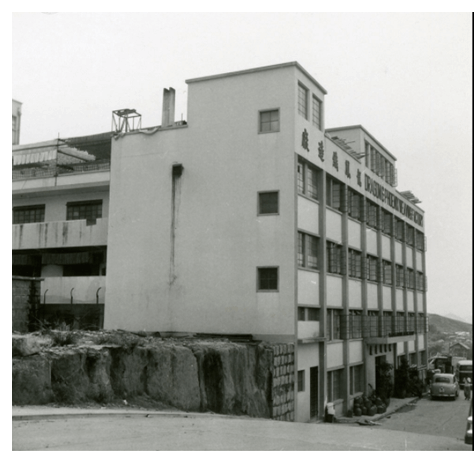 Kamsing Knitting Factory and Dragon & Phoenix Weaving Factory were two leading garment manufacturers in HK founded by Mui Chok-chu (梅作柱, 1907-1984) that were fixtures of the CMA HK Products Expo in the 1950s and 1960s. Kamsing manufactured a variety of garments such as singlets, shirts and underwear while Dragon & Phoenix specialized in linens, bed sheets and towels. 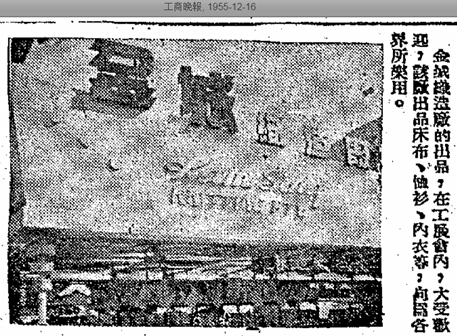 A native of Nanhai in Guangdong province, Mui Chok-chu was listed as the proprietor of the gold trading firm of Lee Nam in the 1932 members directory of the HK Gold & Silver Exchange. It is unclear as to when Kamsing and Dragon & Phoenix were founded. Kamsing’s name first appeared in 1953 when it was one of the HK factories exhibiting in the Industrial Fair in Singapore organized by the CMA. At the time, its factory was located in Fa Yuen Street in Mongkok and it was known for its “Golden Triton” brand of men’s underwear and “Beauty” brand of ladies’ undergarment. By the 1960s, Kam Sing was located at Bedford Road in Tai KokTsui next to its affiliate Golden Glove Factory (金鳳手套).

One of Mui Chok-chu’s daughters shaking hands with Governor Black at the Dragon& Phoenix booth at the 1961 HK Products Expo (WKYP, 1961-12-27)

Kam Sing also manufactured bed sheets but appear to have shifted that business line to Dragon & Phoenix in the late 1950s with its plant located at DD 445, Lot 693 in Ha Kwai Chung.

Mui Chok-chu and family at the Kai Tak airport before heading to Thailand for the opening of Dragon & Phoenix’s new plant over there in 1962 (WKYP, 1962-12-3)

Dragon & Phoenix’s products were exported to the UK, Thailand and Singapore and was described by the Chinese press in the early 1960s as the “King of Linens”. In December 1962, a branch factory was established in Thailand which occupied several tens of thousands square feet and equipped with the latest machinery. As a firm, Dragon & Phoenix was incorporated in 1970 but dissolved in 1983. 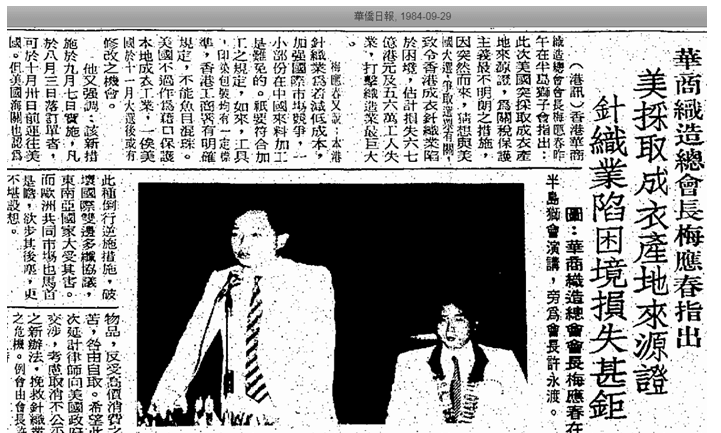 Robert Mui (left) speaking on the HK garment industry as chairman of the HK Chinese Textile Mills Association at a Lions club function in 1984 (WKYP, 1984-9-29)

In the 1970s and 80s, the Mui family incorporated Mui’s Kamsing Knitting Factory in 1976, Mui’s Kamsing Enterprises Ltd in 1979 and Mui’s Kamsing Garment Ltd in 1986.  Mui Chok-chu died in January 1984 at the age of 76 at the HK Sanitoriumand was survived by2 sons and 5 daughters who took over the business. His eldest son Robert Mui Ying-chun (梅應春, 1945-), who graduated from Tennessee State University, served asdirector of Tung Wah in 1977-78 and was founding president of Rotary Club of Kwai Chung in 1984. He is also a committee member of Chinese General Chamber of Commerce and theCMA and served as a director of the Lai Sun Group (he was active in the football circle with Lai Sun’s Lam Kin-ming in the early 1980s) and chairman of the HK Chinese Textile Mills Association (founded 1931) in the 1980s. Robert’s younger brother David Mui Ying-yuen (梅應源) M.H. J.P. has served as president of HK Squash and was elected chairman of the Asian Squash Federation in 2013, the first person from HK to hold that position.

Under the management of the second generation, the family has also expanded from garments to property investments and in recent years entered the restaurant business as Robert’s son Jeffrey Mui (梅慶豐), a hotel administration graduate from Cornell,has founded several restaurants in HK such as Drawing Room and Hainan Shaoye.

This article was first posted on 31st August 2018.