The following article has been extracted from the Dictionary of Hong Kong Biography. The publisher HK University Press, has given permission for it to be posted here.

The following article about John Bell-Irving was written by Libby Halliday Palin and first  published in the Dictionary of Hong Kong Biography, edited by May Holdsworth and Christopher Munn. The publisher, HK University Press, has kindly granted permission for it to be posted here, but retains copyright over this material from 2012. 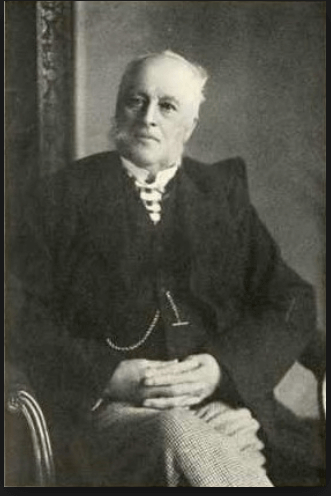 John Bell-Irving came From a Scottish borderlands family of wealth, history and education. He was the eldest son of another John Bell-Irving, the Laird of Whitehill and Mary Jardine, niece of the founder of Jardine, Matheson & Co., William Jardine. When his father died he became the 17th Laird. Educated in Edinburgh and on the Continent, he joined the family firm and left for Hong Kong in 1872. As well as having a sharp business mind, he was a gifted athlete, and followed the traditional pursuits of the country gentleman. In Shanghai he owned and hunted a pack of foxhounds, and in shooting trips to the Yangtze Valley his party made record bags of pheasant, deer and wild fowl. But it was in horse racing that he met with even greater success: he carried off the Champion’s Race in Hong Kong for five years in succession, and, according to Governor Des Voeux, looked ‘more like an English squire than a merchant’. In 1884 when the Hong Kong Jockey Club was formed, Bell-Irving and Paul Chater were elected two of the first stewards. Through their passion for the horse, and their membership of the Legislative Council, the two men became good friends and together were the creative minds behind two of Hong Kong’s most important companies, one either side of the harbour.

Bell-Irving had become Jardine’s taipan in 1886 when his cousin, William Keswick, returned to London. It was then that he and Chater brought their ideas to fruition. Hongkong and Kowloon Wharf and Godown Co. Ltd (1886) was a merger of Chater’s development company in Kowloon with Jardine’s Hong Kong wharves and godown interests. John Bell-Irving was the first chairman. Hongkong Land was their second collaboration. By the time the company was launched in 1889, Bell-Irving had just retired home to Scotland, and it was his cousin, James Johnstone Keswick, now taipan, who was appointed first chairman of Hongkong Land. Bell-Irving and Chater also cooperated in bringing electricity to Hong Kong: as prominent public figures, they both agreed to help launch the Hongkong Electric Company and to be among its first directors.

In 1884 Bell-Irving married Isabella Thornton, niece of Lady Marsh, whose husband, William Marsh, was Colonial Secretary and at that time Acting Governor. They had five children, of whom the eldest, another John, joined Jardines and became a director in 1919. Bell-Irving’s younger brother, James Jardine Bell-Irving, who had also joined the firm, was appointed taipan in 1896 and served until 1902. Clan and homeland were always central to Jardines’ ethos, as they were to many of their close Chinese business partners. Nevertheless, even though kinship and Scottish borderland origins were almost a prerequisite for high office in Jardines, Bell-Irving was well aware that native intelligence could never be underestimated. He wrote of a new recruit in 1888: ‘he may improve, though he looks anything but smart, but if we are to have efficient men it will not answer to take youngsters because of their connections.’ (1)