The Hong Kong Rickshaw over Time

The rickshaw, as westerners pronounce it, originated in Japan where it is known as jinrikisha – jin (man) riki (power) sha (carriage).  Its basic design includes a carriage resting on two large-diameter wheels, a pair of long parallel poles joined by a crossbar, in addition to a removable hood which can be lowered or raised to protect the passenger against the burning sun or rain.  It is hand-pulled and foot-run by the strength of one man who works in the front part,  with the passenger sitting behind. 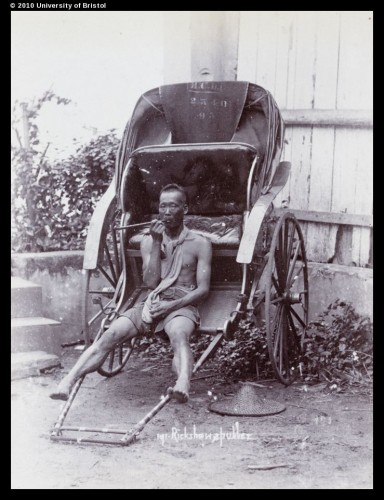 A ‘two-seater’ rickshaw, Hong Kong circa 1880s. Note the “indentation in seat” on one side of the cushion
(Image courtesy: Historical Photographs of China Collection, University of Bristol, England)

The rickshaw made its first appearance in Hong Kong in January 1874, when one was imported from Japan for Mr. S. L. Heinemann – a shipbroker of Heinemann & Co. who had an office in Bank Buildings, Queen’s Road (The Chronicle & Directory for China, Japan, & The Philippines, 1874).  This rickshaw was designed to make it practicable for two adults to sit together.  A report in The Hong Kong Times for 23 January 1874 reads as follows:

“A NOVELTY was witnessed yesterday in our drives—a spanking new “Jini-riksha,” from Japan, brought down for Mr. Heinemann.  The back and sides are done to death with native outlandish figures &c.  It seems a comfortable little vehicle, capable of holding two light weights, with American fashion wheels, which we think will not be much improved by an acquaintance with our macadamized roads of which we are so proud!”

Rickshaws catered for the public for the first time on 22 April 1880.  They became a popular form of transport which was nearly as convenient as that provided by taxis nowadays.  Within two years of its advent, the public rickshaw appeared in great numbers which grew from “30” in 1880 to several hundred in 1882.  In addition, an unknown number of private rickshaws were running around (The Hongkong Daily Press, 1 May 1880; The Hongkong Government Gazette, 3 November 1883).

Troubles occurred when it was found that the narrow wheels of rickshaws caused physical wear and tear to the roadway.  The whole of Queen’s Road was cut up into deep ruts and, with every shower of rain the road was made almost impassable by the accumulation of mud.  In the 24 January 1890 edition of The Hongkong Daily Press, a journalist recalled the early years of rickshaw traffic: “Until jinrickshas were introduced Queen’s Road was always clean, even in the
wettest weather.  As soon, however, as these little vehicles came into use, the state of things was entirely changed.”

To address this matter, the Government took firm measures to put a limit to the number of public rickshaws registered, at the same time requiring rickshaws to have wider wheels and to have a smaller body with which it could carry no more than one adult.  A newspaper, from its correspondence with the Government, revealed details of just what the differences were between the old and new types of rickshaw:

“The new machine is expected to be much more suited to the traffic, and is an improvement on the old in several respects.  Its dimensions are: diameter of wheel, 3 ft. 6 in., being two inches less than the diameter of the wheels at present in use; breadth between the wheels 3 ft., about a foot less than in the old machines; width of seat 21 inches, instead of from 34 to 36 as at present; height of cover from seat 43 inches; length from seat to the front foot board 23 inches, five or six inches more than in the old ones; and breadth of tyre one inch, in place of 5/8 and 3/4 of an inch as is the case with those in use.” (The China Mail, 12 August 1882)

The new version of the rickshaw was said to be far superior to the earlier type both in comfort and riding qualities and, in particular, it would seem that there was an awareness of the strain caused to the coolie pulling a rickshaw with two adults in it:

“The broader tyre will cause the work of pulling to be slightly heavier, but as there can be no possibility of there being more than one occupant at a time, the coolies’ work will be easier than it frequently is at present.  The back of the seat is higher, and gives more comfort than those of the present vehicles.  The springs are of the latest and most approved description, and the whole machine is preferable to the one now in use.” (The China Mail, 12 August 1882)

After the new rickshaws came into service, there certainly was a change for the better but a great improvement had not been made.  The re-macadamized Queen’s Road was still not strong enough to withstand the cutting action of rickshaw wheels, and during the 1880s and 1890s there were newspaper comments and questions in the Legislative Council on the needs for improvement.  The editor of The Hongkong Daily Press commented on 24 January 1890: “An attempt was made to mend matters in the first instance by a regulation that licensed vehicles should have wheels of a certain thickness.  Might not another step of a similar kind be taken and all jinrickshas be required to have rubber tyres similar to those of bicycle wheels?”

It will be seen that an improvement of the rickshaw services was no easy journey and Hong Kong moved rather slowly to replace wooden-wheeled rickshaws with new models to be fitted with rubber-tyred or pneumatic-tyred wheels.

The new electric tramway system came into service on Hong Kong Island on Saturday, 30 July 1904.  Since the tramcar was faster moving than the rickshaw, it “had a busy time taking passengers to and from the Race Course” on the day (The Hongkong Daily Press, 1 August 1904).  As tramcars appealed to many commuters around town and took a big slice out of rickshaws’ receipts, it became more difficult to get proprietors to upgrade their rickshaws.  In 1907, when Mr. E. Osborne asked the Government to state what their policy was in regard to the introduction of public rickshaw of an improved type, he was told that:

“The Government after careful investigation are of the opinion that, owing to the large decrease in the demand for rickshas incident upon the opening of the Electric Tramway, the licensees [the holders of ricksha licences, that is, ricksha proprietors], if called upon to provide a better type of rickshaw, will not have sufficient inducement to carry on their business unless the scale of fares is raised or the licence fee is reduced.  It is considered not expedient to make either of these concessions.” (Hongkong Hansard, 6 June 1907)

The rickshaw strike on 6 January 1908 is a telling example of the “money factor” as an obstacle to rickshaw upgrade.  Some 2,000 coolies refused to ply for hire for several hours owing to a rent rise on rickshaws.  The police, who mediated the dispute, questioned a number of proprietors who stated that they had to introduce new rubber-tyred rickshaws and they felt the coolies ought to share this extra expense with them.  Later in the day, the coolies returned to work after the proprietors promised to withdraw their demand for a rent increase. (South China Morning Post, January 7 1908)

In May 1914, the Governor F. H. May and his aides “suggested that the question of providing by Regulation that all jinrickshas must have rubber tyres should be referred to the Captain Superintendent of Police.” (Minutes of Hong Kong Executive Council, read and confirmed by Mr. M. J. Breen, Clerk of Council, 23 May 1914).  The next month, the Captain Superintendent of Police arranged with rickshaw proprietors to operate ten rickshaws with pneumatic-tyred wheels for public hire as an experiment.  After three months’ use, the new rickshaws were worn out and taken off the city streets.

Mr. S. H. Dodwell, a leading businessman and representative of the mercantile community, asked in the Legislative Council in 1918: “Cannot steps be taken by the Government that will lead to a gradual, if not immediate, improvement in the local jinrickshas?” to which the Colonial Secretary replied, “There has been a steady improvement in the local jinrickshas during the past ten years.  More comfortable vehicles have been introduced, with rubber tyres, covers for the seats and backs, and improved aprons; while better uniforms for the pullers have also been provided….  Improvements cost money, and such compensatory increase in the fares as might be required would not be popular with the public.” (Hongkong Hansard, 31 December 1918)

On 30 January 1919, Mr. P. H. Holyoak was asking in the Legislative Council: “Will the Government arrange for a supply of pneumatic-tyred modern rickshas for the Colony?”  The same year, the Government appointed a committee of six men (chaired by the Captain Superintendent of Police) to select a new type of rickshaw to be put into service.  The committee met on 31 March 1919, and five different types of rickshaws were submitted for their inspection.  They selected what they considered to be the best features of each type and a complete vehicle was constructed in accordance with this selection.  This vehicle was put on view in the compound of the Central Police Station and all rickshaw proprietors were informed that in future only rickshaws of this type would be passed by the police for service. (Hongkong Legislative Council Sessional Papers, No. 6/ 1920) 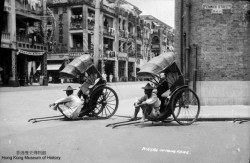 Two rickshaws in the eye of the camera, Hong Kong 1930s
Note that the rickshaw on the right is fitted with pneumatic tyred wheels
(Image courtesy: Hong Kong Museum of History)

During the interwar period, the old-fashioned rickshaws with wooden wheels were gradually replaced by more effective rickshaws with pneumatic-tyred wheels.  In 1939, a report was prepared by the Inspector General of Police, who said: “About 60 % of the public rickshas have been fitted with pneumatic tyres, and the remainder will be so fitted in 1940.” (Hongkong Administrative Report, 1939)

This short article is about the efforts made to modify the design of the rickshaws used in Hong Kong, so as to make this means of travel smoother, more comfortable, and more suited to the local traffic.  In this discussion, we have viewed many of Hong Kong’s “first” in history, such as who first introduced the rickshaw to the city of Victoria, the first type of rickshaw with a seating space of up to two adults, and the first of a type of rickshaw fitted with pneumatic tyres which continued in use until the 1960s when the traffic authorities decided not to issue any new licences and to renew existing ones until the man concerned no longer wished to continue his trade.  By then, the rickshaw was on the way out overtaken by more modern means of transport.

This article was first published in the Indhhk email Newsletter 8 sent out on 19th August 2013.