Fung Chi Ming: The type of man-powered transport known in English as “sedan chair” has different regional names, including jiao (轎) in China and kago (駕籠) in Japan. In Hong Kong, where it is no longer used as a means of passenger transport, it is known in local Cantonese dialect as san-dau (山兜, “mountain cabin”), kin–yue (肩舆, “shoulder carriage”) and chuk-kiu (竹轎, “bamboo sedan”).

Bamboo is the main material for the making of the Chinese sedan chairs. The sinologist, J. Dyer Ball (1847-1919) remarks in his delightful compendium, Things Chinese (1903, page 73): “The street-coolie, or the chair-coolie, would be badly off without the bamboo: it provides carrying-poles for the first, whilst the whole framework of the sedan-chair, and the shafts are often of this material.”

In Hong Kong, public (for-hire) sedan chairs were of two main types. The light-weight ones consisted of a seat of rattan affixed to two bamboo poles, having a narrow board linked by two cords for the purpose of resting the feet of the passenger. The more elaborate sedan chairs were enclosed and fitted with overhead canvas hoods for protection against sunshine. 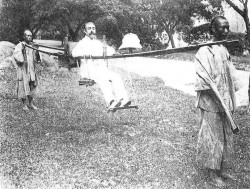 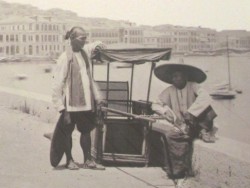 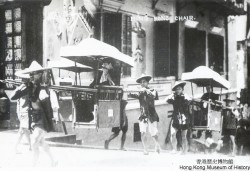 A memorable depiction of Hong Kong’s street scene in the 19th century can be found in John Thomson’s 1873 masterpiece, Illustrations of China and Its People, Volume 1: “Chair-stands are to be found at all the hotels, at the corners of the chief thoroughfares, as well as on the wharves, where the eager chair-coolies pounce upon each freshly-arrived stranger as he lands at the port.”

Indeed, the Registrar General and Captain Superintendent of Police of the Hong Kong Government could direct that certain parts of the street space be set aside as places where unengaged sedan chairs should stand ready for public hire. They could also specify and revise, subject to approval by the Governor in Council, the scale of fares for public sedan chairs to be charged. 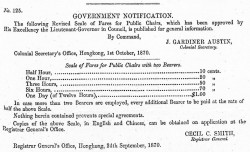 In Victoria Barracks 1842-1979, a book prepared by the Headquarters British Forces Hong Kong, there is a mention of military life in Hong Kong in the period 1888-1900: “The duty officer had to visit guards around Murray and Victoria Barracks and in particular the magazine in the top corner of the latter. The tour took two hours by night and for this duty the orderly officer called out a sedan chair. This was carried around by four coolies.” 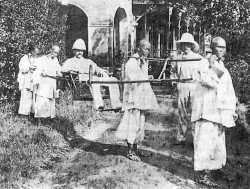 The Peak residences usually had sedan-chair sheds and quarters for chair coolies. Leo D’Almada e Castro, a Portuguese barrister in Hong Kong, recalled the pre-1941 days: “Many of the upper level residents, particularly the Japanese, had private chairs. These were made entirely of wickerwork instead of the usual oilcloth. These chairs were carried by four coolies with two more in reserve. They moved at something like four miles per hour, even uphill. The average chair with two coolies was much slower.” (South China Morning Post, 25 January 1975)

Riding in a sedan chair was a symbol of status. “Even from mid levels down to Central,” Leo D’Almada e Castro recounted, “people used chairs. Somehow walking must have entailed loss of face, I suppose. My grandmother lived near the university and we went by chair when we visited her.” (South China Morning Post, 25 January 1975)

Sedan chairs remained a widely used means of city transport in early 20th century, so much so that in 1901 the Governor Sir Henry Arthur Blake appointed a commission to enquire into the causes of public complaints about the difficulties of procuring and retaining carriers for private sedan chairs and rickshaws (The Hong Kong Government Gazette, November 30, 1901).

Sedan chairs that came into use in Hong Kong were locally made. The Anglo Chinese Commercial Directory, published in 1915, records five “rattan chair maker stores” under the store names of Cheng Kee (津記), Hang Yuen (恆源), Teen Shang (天盛), Yue Tack (裕德) and Yue Wo (裕和). Two of them were located in Wellington Street, the others in Aberdeen Street, Belchers Street, and Staunton Street. 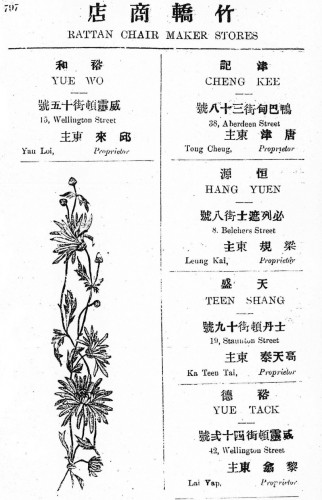 Sedan chairs reached a peak in 1921 when 1,218 were licensed. That year, Carl Crow remarks in his work, The Travelers’ Handbook for China, Including Hong Kong: “The [Hong Kong] island is covered with rugged hills and small valleys through which flow a few rocky streams…. A form of exercise very popular in Hong Kong is to ride to the top of the hill on chairs or in the tram and walk back to the city.”

The steep and narrow paths to the upper parts of Hong Kong Island known as “The Peak” made the sedan chair a convenient form of transport to cover the distances between home and office in the early colonial days. For a thumbnail account of the unique role of the sedan chairs in Hong Kong, one should read the words of a journalist of the Hong Kong Times (February 14, 1874):

“Sedan Chairs in Hong Kong are different from Sedan Chairs in any other parts of the world … Doubtless, it is owing to the peculiar formation of the City that the bearers are so superior to any to be found in the open ports … We at one time thought that our streets were, some of them, so remarkably steep, that a wheeled vehicle could not possibly go up them, unless drawn by some power much greater than possessed by two men.”

When John Thomson visited Hong Kong in the 1870s, he was “for a time affected with a sentiment of compassion towards the unfortunate men [sedan chair carriers] who bear him about on their shoulders. This, however, soon wears off: he feels the necessity of rest after a hard day’s work in a hot, trying climate….” (John Thomson, Impressions of China and Its People, London 1873)

More and more people deplored the use of human beings as “beasts of burden” and protested when sedan chairs were shown in cinema pictures or posters, especially after the first road going up the Victoria Peak by cars were completed in 1920. In the year 1936, the Hong Kong Travel Association’s poster, with a sedan chair being carried up the Peak, was much resented (South China Morning Post, April 8, 1936).

Due to the shortage of cars and fuel, human transport revived during the Japanese Occupation. The sedan chairs which had begun to fall out of use before 1941 became a means of transport of the rich. A Hong Kong Sedan Chair Syndicate (香港駕籠組合) was formed in 1943 at the behest of the Japanese, with an aim to supervise the trade such as the scale of fares to be charged (Wah Kiu Yat Po, July 17, 1943).

After the war, sedan chairs were increasingly squeezed off the roads. No sedan chair was re-licensed since the early 1960s. In February 1971, Jill Doggett of South China Morning Post wrote a story of two sedan chair carriers, aged 71 and 74, who still plodded their way in Wyndham Street. Soon afterwards, the last public sedan chair went out of use, thus marking the end of an era in Hong Kong’s transport history.