The Economics of the Tricycle Industry in Hong Kong – Part Two

Fung Chi Ming: Right after the British re-occupation of Hong Kong, an interim military administration was set up as a provisional authority until the civil administration took over on 1 May 1946. The Hong Kong Government Gazette dated 29 August 1946 announced that “public passenger tricycles”, as they were called, would have to register and be licensed. A schedule of fares for riding them was laid down. It was specified that a tricycle shall not carry more than three adult passengers and shall be fitted with suitable seating as approved by the police. At the time, there were hundreds of tricycles providing a taxi-like service.

Wu Wai-tim, now 85, the owner of a family-run bicycle shop which was set up in Shumshuipo in 1946 and which still exists today, recalls that the glory days of the tricycle industry were the mid to late 1940s. It took about three days for a tricycle to be assembled, provided that the materials were available, he said. The handlebars were made out of decommissioned water pipes obtained from demolished buildings, whilst the flat wooden platform was acquired from local timber yards. He also remembers that a great many other bicycle shops also assembled tricycles for sale (Interview with Wu Wai-tim, 31 August 2013).

Tricycles were not available at a cost that ordinary people could afford to buy; not surprisingly, few if any of the tricycles were self-owned by the riders. In March 1946, a new tricycle was reportedly worth $370 (The China Mail, 13 March 1946). Around 1947, Wu Wai-tim recalls, the cost of a new tricycle to a cash customer was between $400 and $500, whilst a second-hand one would cost $200 to $300 at a time when rice was priced at $0.60 per catty (Interview with Wu Wai-tim, 31 August 2013). The rental prices for tricycles were dependent on condition. A high-quality, second-hand cargo tricycle was brought to the market in June 1948 costing $490. 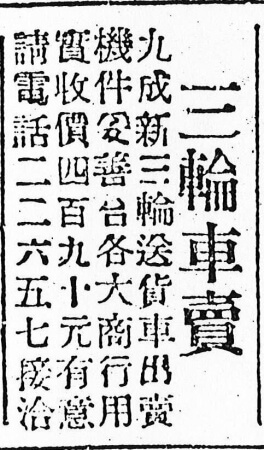 At the end of 1947 the number of vehicles showed a large number totaling 2,338 against 1,152 at the end of 1946 (Hong Kong Annual Report 1947). With the rapidly growing volume of other forms of traffic, the tricycle was perceived as a traffic menace. In the last two months of 1947, The China Mail gave two reports of incidents involving tricycles. On 2 November, a tricycle went into the harbor along Connaught Road Central, killing a Chinese male who was sitting in the vehicle. In another case, on 17 December, a Chinese female suffered injuries when the tricycle she had engaged overturned near a bank in Queen’s Road Central at 8:30 pm.

In June 1948 the Government decided, on the recommendation of the Traffic Advisory Board, to cancel all licences for public passenger tricycles within the next six months. The owners and riders of these vehicles were notified that after 30 November 1948, these vehicles would be withdrawn from the streets and the riders had to stop from plying their trade. For the time being, however, tricycles which were licensed for the transportation of goods were allowed to remain on the streets (South China Morning Post, 16 June 1948). 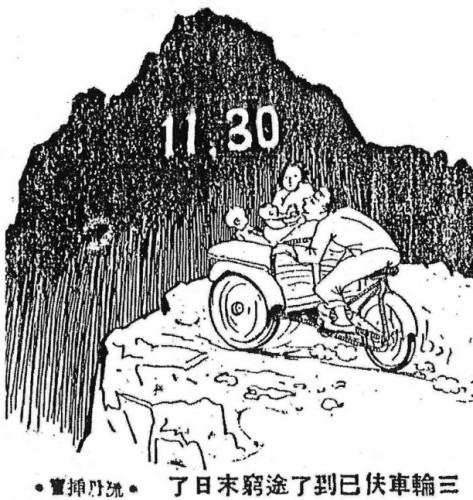 The riders of public passenger tricycles protested over the ban. On 16 November, some 1,200 persons paraded through several city streets and made a peaceful demonstration outside the Fire Brigade Building, making the news headlines. They presented a petition to government departments including the Labour Office and the Secretariat for Chinese Affairs, asking for a postponement of the ban and saying they did not know what else to do to make a living. But the government staff said they had already had several months’ grace, and with the increased number of motor vehicles available, this old means of passenger conveyance must go.

The police started to phase off passenger tricycles from all the major streets and intersections of the city during the early hours of 1 December 1948, when some 30 arrests were made. Many tricycle riders continued to ply their trade until they were caught. The evening newspaper, Hsin Sheng Wan Pao 新生晚報 (26 December 1948) noted that a great number of tricycles were confiscated during the raid-and-arrest operations, and they were impounded in a depot of P.W.D. (Public Works Department) near the fish market in Kennedy Town.

By the end of 1949, the number of people who earned a living by taking passengers in tricycles declined from 1,200 to 707, according to Wah Kiu Yat Po’s annual directory (香港年鑑). In the following years, with a rising number of load-carrying vehicles, more tricycles were squeezed off the road. As it became increasingly difficult for the riders to eke out a living, clients’ orders for tricycle making were no more from the 1970s onwards (Interview with Wu Wai-tim at his bicycle shop at 98E Ki Lung Street, 31 August 2013).

Lai Shun (黎信) was possibly the last tricycle rider in Hong Kong. From the 1940s to the early 1990s, Lai operated a tricycle self-owned by him to send goods from wholesale points to retail outlets in the city districts of Kowloon. For years, he conveniently spent the night sleeping in a shop of kwo-laan (果欄, Cantonese for “wholesale fruit market”) in Yaumatei. He passed away not long after he left tricycle riding (Oral interviews with Fung King-chuen and Fung King-fun, retirees of the wholesale fruit market in Yaumatei, 17 August 2013).

Thanks to Wu Wai-tim (胡惠添), Fung King-chuen (馮景全) and Fung King-fan (馮景芬) who responded to my requests for interviews and gave unsparingly of their time and memories. Thanks too, to Cheng Po-hung (鄭寶鴻), Ed van der Elsken, and Water Poon (水禾田) for their pictorial books and photos captured on camera, which, with their visual appeal, bring back memories of the past. It is through oral histories and photos like these that we are able to understand Hong Kong’s history, culture and heritage in a more engaging way.

This article was first published on 16th January 2014.