HF: Vol. 34 of the Journal of the Royal Asiatic Society Hong Kong Branch published in 1994 contains a lengthy article about German speakers in Hong Kong and of the companies they were involved in. It was written by Carl Smith.

I am familiar with only a small number of these companies and even fewer of those persons working for them. I don’t think most were what we could describe as industrial, in that they were involved in manufacturing, shipping, mining, utilities etc. However a few were and I think it is of general merit to include the whole article on our website.

As the article is lengthy I think it best to break it up into at least two parts.

If you have not come across Carl Smith before you can read more about the man and his quite extraordinary passion for collecting data about Hong Kong here.

The whole RASHKB article is linked below.

…the article continues with information about a number of firms. I list them here together with the opening paragraph of each and anything else of interest. The print is a little hard to read, I welcome corrections, and of course further information especially of an industrial nature: 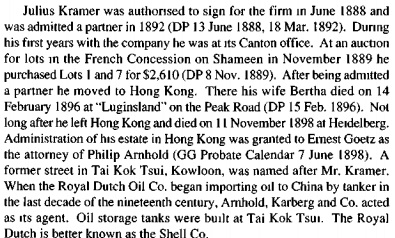 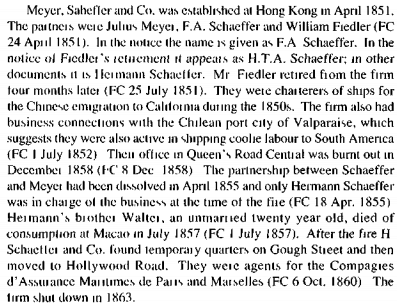 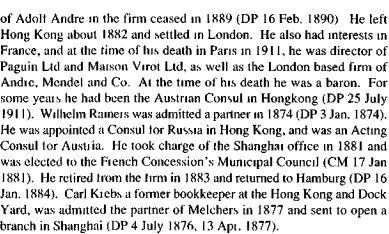 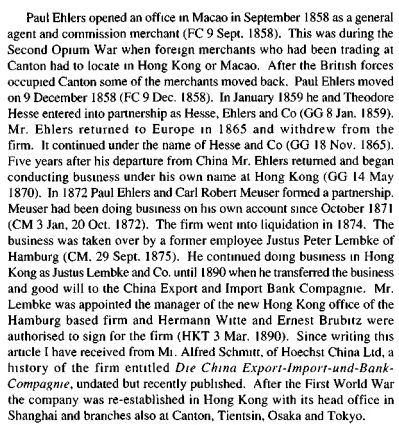 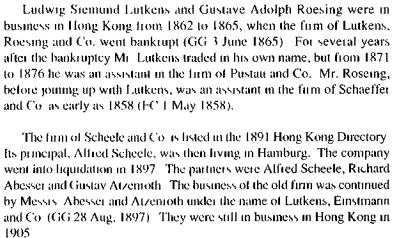 Raynal and Co, Peter and Ebel, Milisch and Co

Carl Smith then lists firms established after 1880. The date is the opening of a company office in HK.

Ulderup and Schluter 1906
“Ulderup and Schluter opened an establishment in Hong Kong in 1906 as general merchants, engineering agents and motor boat builders. The partners were Johannes P Ulderup and Carl Schluter. When Jebsens returned to Hong Kong after the Second World War, Mr. Ulderup was head of their machinery department.”

George Prien [?] “was an assistant in Blackhead and Co in 1902 but in 1908 set himself up in business as a dealer in cigars and tobacco. In 1914 his shop was in the Hong Kong Hotel Building.”

Heuser, Eberius [?]  “listed in the HK Directory of 1914 but both its partners were not in Hong Kong at that time.”

Lamke and Rogge “…was formed in 1890 as shipbrokers by Johannes Lambe and Carl Heinrich Rogge. Mr Lamke had been an assistant in Blackhead and Co. and then Arnhold, Karber and Co. In 1885 he had his own shipbroking office until he and Mr. Rogge became partners. Mr Rogge began his business career in Hong Kong wirh Melchers and Co. In 1914 Lamke and Rogge are listed as ship, freight and coal brokers. ”

Robitske and Reis [?] (Grossman and Co) no dates given

Ships and Stores:
Blackhead and Co

German watchmakers
Charles Weiss, Gaup and Co  – this section does not appear to indicate that the watches were actually made in Hong Kong. However…see the next company. 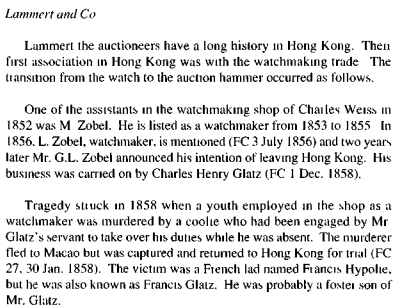 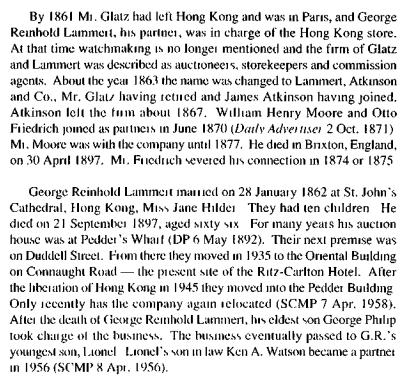 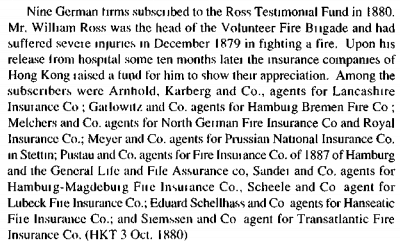 The Internment of Germans in 1914

The article concludes with a very intesting though brief account on this subject. It includes details of escape attempts.

The image shown on the Home Page is of F Blackhead & Co.’s Soap and Soda Factory in Shau Kei Wan.

This article was first posted on 3rd August 2015.

See: RASHKB says “Anyone with an interest in the history, art, literature and culture of China and Asia, with special reference to Hong Kong, will enjoy membership of the Hong Kong Branch of the Royal Asiatic Society, which is generally regarded as the premier Society for the study of Hong Kong and South China. Dating back over 150 years, the Society is today a very active body, organizing varied visits, talks, seminars and more.”
The Royal Asiatic Society Hong Kong Branch website