HF: The Chinese in Northwest America Research Committee has a website with Hong Kong links including this:

“In 1882, a fascinating legal case got under way in San Francisco.  The defendant was the U. S. government, which had seized 3,880 5-tael cans of opium, all bearing either “Lai Yuen” or “Fook Loong” labels, from a local man named Kennedy.  He claimed that he had been shipping the opium, perfectly legally, to Hawaii, when it was seized.  Maintaining that he had not broken any law, he wanted his opium–$25,000 worth–back.

One of the most interesting aspects of the case was that Kennedy, as his lawyers showed through witnesses, had commissioned a Chinese merchant in San Francisco to produce quantities of counterfeit Hong Kong (Lai Yuen and Fook Long) opium cans, using cheap high-morphine Turkish opium instead of the costly low-morphine Patna (Indian) opium used by the Hong Kong refiners.  The faking was done  with the object of smuggling the opium into Hawaii, then an independent kingdom, where it would sell for a very high price due to opium laws that were much stricter than in the United States.  Genuine Hong Kong opium could be sold in Honolulu for double what it cost in San Francisco.  Naturally, the profit margin would be even greater if cheap Turkish opium could be disguised to look like the expensive Hong Kong kind…” 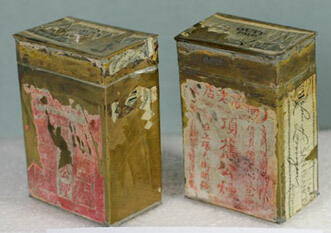 This article was first posted on 7th June 2015.