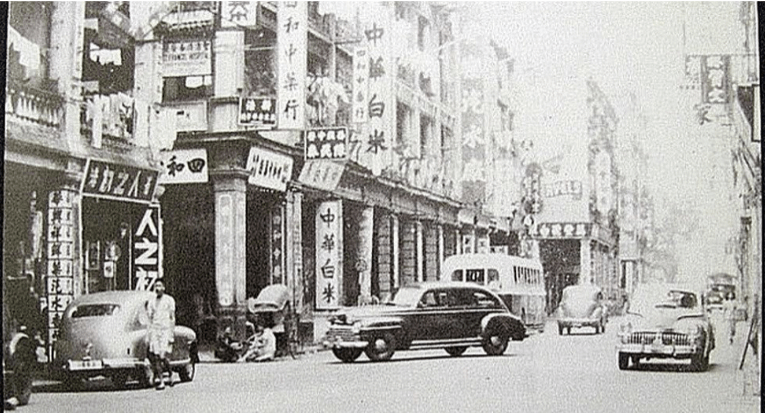 Originally founded in 1907, revived in 1921 and active until the early 1960s, Connaught Aerated Water Co (“On Lok” in Chinese) was the first (and for many years before the War the only) Chinese-owned aerated water company in Hong Kong and one of the leading players in the industry. Although the firm and the brand has long faded into history, an organized crime group which traced its origins from the labor organization formed in the 1930s at its factory remains active today and the names of the triad organization (Wo On Lok and “Shui Fong” which means aerated water factory) are references to the long-defunct aerated water company from the early 20th century.

Connaught Aerated Water Factory (安樂汽水房) was founded in 1907 by Chan Sui-chi, Chan Kam-yu and Chu Shun-cho with HK$50000 in capital, two years after the large scale boycott of American goods which swept across China in 1905 and fostered the establishment of many Chinese industrial enterprises, especially in areas which were previously 100% dependent on foreign imports or foreign-owned firms, aerated water being one of them. As shown in the trademark registration notice above, the original factory location was at 63-65 Queen’s Road East and the founders picked the “Awakening Lion” as its trademark. The ad from 1908 below shows that by the second year, Connaught also had branches in Shek Tong Tsui and 11 Pottinger Street in Central. Due to mismanagement, the business struggled and by December 1912, the board chaired by Chu Pak-kin decided to liquidate the business as it could not meet its liabilities and Wong Siu-leung was appointed liquidator.

In 1921, two early engineering graduates of Hong Kong University – architect Iu Tak-chung (姚得中, later proprietor of Clark & Iu from 1924-34 which designed the King’s Theatre in Central, Tung Wah East Hospital and Po Leung Kuk main building) and sanitary engineering expert Lee Iu-cheung (see article on plumbing pioneers) decided to revive the aerated water business by incorporating Connaught Aerated Water Co Ltd and recruited their HKU classmate Au Kun-u (區灌歟) as managing director and his father the prominent metal merchant Au Lim-chuen (區廉泉, 1871-1958) as chairman while Iu himself served as assistant manager and Lee as treasurer (Comacrib Directory, 1925). Below is the excerpt from the senior Au’s biographical entry in the 1925 bilingual Biographies of Prominent Chinese (中華今代名人傳, the Chinese names were added based on the Chinese version of the entry) which adds more color to the family background:

“MR. AU LIM CHUEN, was born in 1871 at Fatshan, Kwangtung Province. He is the eldest son of Mr. Au Kan Tung (區澗東), a native of Namhoi Hsien, in the Province of Kwangtung, who, in 1869, established the well-known firm of Tai Chan (泰棧五金商店), metal dealers in Hongkong. Mr. Au began his business career in the year 1887, when he took over the management of the firm. This business is still being carried on at Hongkong, where it was first established. With the co-operation of his younger brothers Mr. Au Siu Cho, the Managing Director of Messrs. Ip Tak & Company (協德洋行), a substantial firm of metal merchants in Hongkong, and Mr. Au Long Hin, Managing Director of the Tai Chan Metal Company (大成五金) and The Yin Chong Metal Company (仁昌五金) (both in Canton, Province of Kwangtung), he has been able to make the firm a great success. The volume of business of the firm to-day has increased to practically ten times that of what it was before his father’s time. For many years the firm has been operating most successfully in Wuchow, Canton, and Fatshan, through its branches there. At present, the Tai Chan Company is recognized as one of the leading firms that deal in metals in Hongkong. The firm is also well known, and has a large clientele, both in Europe and in America. Through its many customers, it is enabled to keep in close touch with the constant fluctuations of the metal market, a thing most essential in Hongkong where the market it so extremely sensitive. Mr. Au has served as Chairman of the Board of Directors of the Connaught Aerated Water Factory, Ltd., the only Chinese concern in Hongkong, in this particular line of business. Apart from being an active business man, he is very generous, and takes an active interest in all social and philanthropic affairs which concern the welfare of the colony. Mr. Au and his younger brothers have each served at various times on the Committees of the Tung Wah Hospital and the Po Leung Kuk, an Anti-kidnapping organization of Hongkong. Among the various donations he has made, mention may be made of a subscription of a considerable sum for the purpose of compiling the District History of Fatshan, his native village. This history is intended to record all meritorious achievements accomplished by the past residents, and to chronicle the progress of the Republic of China, in general. Mr. Au is an energetic and efficient business man, a deep thinker, and the possessor of a mild and benevolent disposition.”

Au Kun-u re-established Connaught’s plant at 55 Queen’s Road East and expanded its product range beyond its traditional focus of orangeade to orange juice, lemonade, grade juice, cream soda, ginger ale, sarsi and others. Within months, the firm was making profits in the tens of thousands and the years between 1923-25 were the golden years for the firm which became a credible rival to foreign-owned competitors such as Watsons in South China before the soda market was affected by HK-Canton strike and the cholera outbreak later in the decade. Kun-u’s second uncle Au Siu-cho (區紹初 1872-1953), a DBS alumnus and chairman of Po Leung Kuk (1937-38), was elected director of Connaught in 1924 and succeeded his older brother Lim-chuen as chairman in 1925. His third uncle Au Long-hin (區朗軒, 1879-1966), who attended Queen’s College and served as director of Po Leung Kuk and Tung Wah, was also a director of Connaught. Au Kun-u, like his father and uncles also served on the boards of Po Leung Kuk and Tung Wah, and was managing director of Connaught Aerated War until his premature death in June 1931 (工商晚報, 1931-06-28)

As shown by reports of Connaught’s board meeting in December 1929, directors of the firm included Li Tse-fong of Bank of East Asia, shipping comprador Shum Pak-ming, Shum Chung-hing, Wong Kut-tong, Fan Chung-kwing, Au Long-hin and Lui Sing-yu (呂星如, 1878-1965). (KSDN, 1929-12-17) As most of the directors had other primary interests, the day to day operations of Connaught was run by Lui Sing-yu, who succeeded Au Kun-u as managing director and ran the firm for the next three decades. 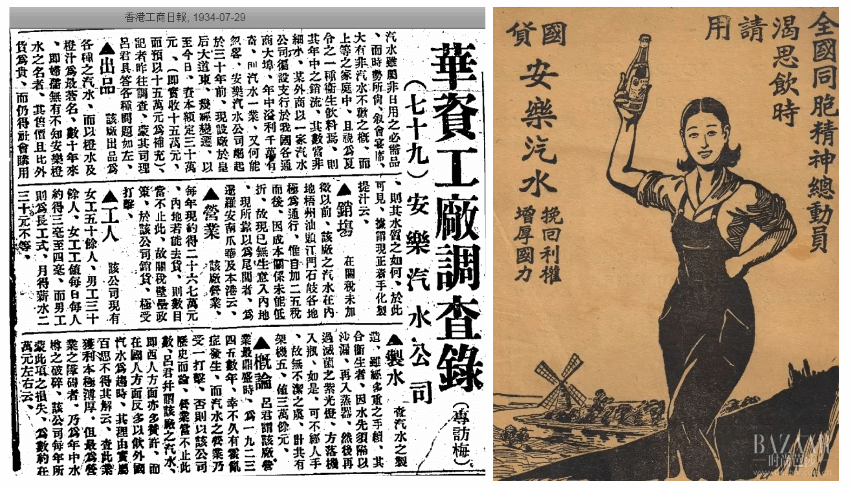 According to the 1934 factory survey above in which the reporter interviewed Lui, the firm had $300,000 in authorized capital (half of which was paid-up) and did HK$260,000 in sales that year which would have been bigger if not for the new import duties imposed by the KMT government as their firm’s products were popular in southern China in cities such as Wuchow, Swatow, Jiangmen and Chungshan. To substitute the loss of income from the mainland market, Connaught exported to Southeast Asian markets such as Siam, Annam and Java. The factory at the time had 50 contract female workers (daily wage of 30-40 cents) and 30 full-time male workers (monthly salary of $20-30). The production process was fairly automated with five machines worth $30000 and the firm’s products were priced higher than foreign brands as local customers valued its quality and also were also motivated to buy “Made in HK” and “Made in China” products as the Sino-Japanese War progressed (many Connaught ads from the era emphasized its domestic origins and its Chinese name also include the word “China”). One of the major costs impacting profitability was breakage of glass bottles which was costing over HK$10000 per year. 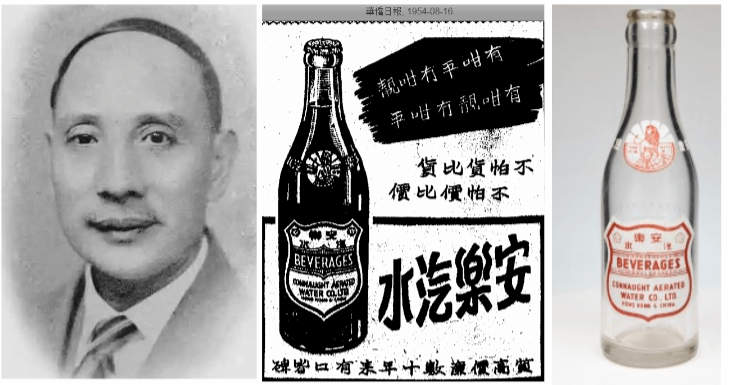 After the War, Lui Sing-yu continued to lead the firm as managing director while Philip Gockchin (郭泉, 1875-1966), the co-founder of Wing On was chairman and Lee Iu-cheung who had by then became the toilet king and community leader remained on the board (later succeeded Gockchin as chairman). In 1950, the factory in Queen’s Road East was burglarized and $40000 cash and three taels of gold were stolen from its safe, allegedly by a former employee who had been laid off earlier.

In 1955, the firm was producing 6000 dozens bottles of aerated water daily during the peak summer season with the smaller size representing 80% of output and larger size 20% and orange juice represented 75% despite of the large variety of soda it offered. While some of the glass bottles were recycled, the firm still needed to order 70000 dozens new bottles every year to keep up with demand, requiring large working capital.  (TKP, 1955-12-28)

In the late 1950s, the aerated water market in HK became very competitive with the entry of many foreign brands such as Pepsi, Green Spot, Bireley’s, Seven-Up and Cosmos (see articles) and by 1962, Connaught was no longer in business (FEER). Lui Sing-yu died in 1965 at the age of 87 and his sons include Lui Kwai-wing (呂桂榮), a solicitor with the firm of Lo & Lo who was appointed Justice of the Peace in 1965 and Dr. Lui Kwai-to (呂桂滔), anti-tuberculosis expert who received his MBBS from HKU in 1940 and received additional training in the UK and the US. While the Au family had phased out of the aerated water business, Au Siu-cho’s son Au Kwong-wai (區廣惠) remained a key player in the HK food & beverage industry as the sales manager the wine & spirits department of Gibb, Livingston & Co and made a fortune distributing the Courvoisier cognac (Le Cognac de Napoleon) in HK. He was also a director of Vitasoy and served as vice chairman of the Tung Wah Group of Hospitals in the early 1970s. 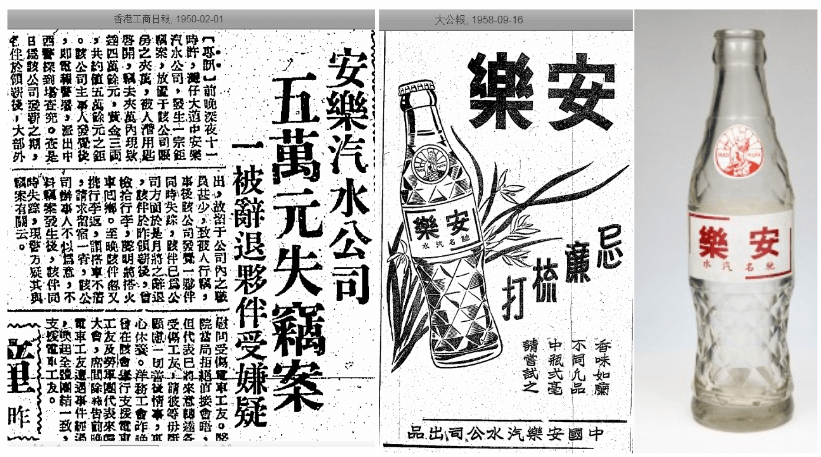 As a firm, Connaught Aerated Water Co Ltd was dissolved in 1992.