HF: Our article, American Marine Ltd boatyard, Junk Bay, includes: “More than 50 years ago, on Mok Cheong Street [Ma Tau Wai/To Kwa Wan] next to Eastern Cotton Mills, was a soft drink bottling plant managed by the founder of American Marine, Robert Newton. In the 1950s, Robert Newton already in his late 50s, an age when many people start to think about retirement, …decided to start a boat building venture at his bottling plant’s parking lot…”

Thomas Sposato has sent this Shing Kong Facebook link. In the text accompanying this photo Shing Kong says: “All I can find is this picture of my father in a Bireley’s delivery truck that belonged to the bottling company Robert Newton owned and managed.”

Can anyone tell us more about Bireley’s bottling plant in Mak Cheong Street? I think the soft drinks company may have been started in Califormia by Frank W Bireley in the 1920s.

I would be delighted to hear from Shing Kong himself or Robert Newton or his relatives. 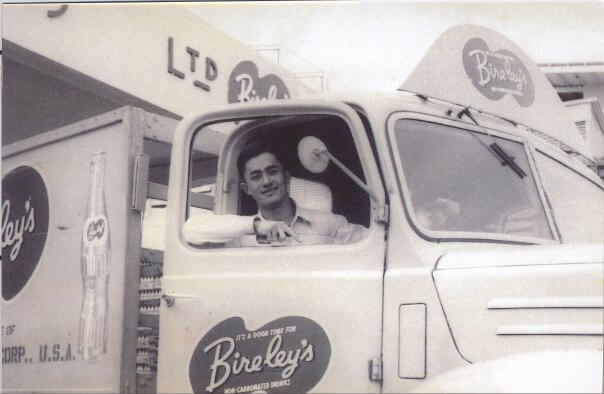 This article was first posted on 13th January 2016.