Many thanks to Thomas Sposato (TS) for sending a large amount of information about the shipyard and those who worked there.

The following powerpoint, linked below, The Legend of Grand Banks, was apparently put together by Shing Kong and Robert M Lane. Shing Kong’s father was a Mr Kong who worked at the shipyard. I wonder if  this is “Joseph Kong, former General Manager of American Marine Company”, as mentioned in the Source 3 below?

The powerpoint includes numerous photographs of the yard including many of the skilled company craftsmen at work. The latter begin at page 31.

I would be delighted to hear from the authors of this fascinating insight into the yard both to further credit them, but also to ask see whether they have further information about Mr Kong and/or the shipyard which can then be posted on this website.
I can be contacted through an added comment below this article. Hugh Farmer.

The Legend of Grand Banks starts:

“More than 50 years ago, on Mok Cheong Street [Ma Tau Wai/To Kwa Wan] next to Eastern Cotton Mills, was a soft drink bottling plant managed by the founder of American Marine, Robert Newton.

In the 1950s, Robert Newton already in his late 50s, an age when many people start to think about retirement, …decided to start a boat building venture at his bottling plant’s parking lot… 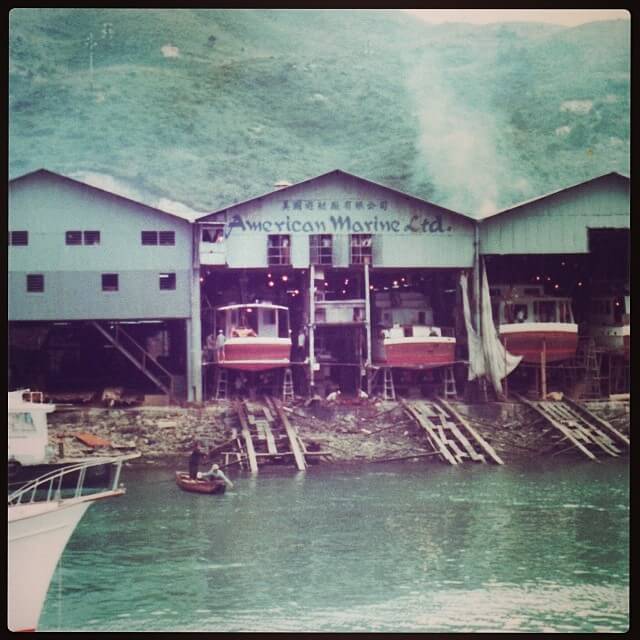 That year they commissioned Kenneth Smith, another well-known marine architect, to design a 36 foot, diesel-powered cruising boat. Spray was launched in 1963 and a year later the Newtons abandoned their custom yacht building to focus on producing the first of a line of boats that would be known as Grand Banks.

Even before Spray, however, there was the Chantyman that American Marine built of wood in its Hong Kong yard. Diesel-powered, the 34′ 6″ boat had a raised pilothouse, high bulwarks and softer hull lines (no hard chines). It was unlike Spray or the 36GBs that would follow, but Chantyman certainly was a design that introduced the concept of a production trawler-type yacht to the boating world.” (2)

“1961-1983 Tony Fleming served as the technical director of American Marine in Hong Kong, builder of the Grand Banks line of trawler yachts. He was largely responsible for the development of these well-known yachts and later organized the company’s new yard in Singapore, becoming its General Manager. While at American Marine, Tony also helped develop the highly respected Alaskan series of pilothouse yachts.” (4) TS 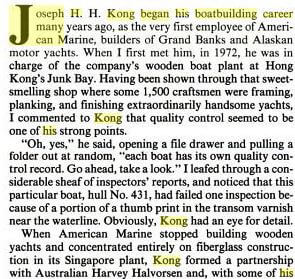 This article was first posted on 30th December 2015.