Lee Yu Kee, Kitson and Tung On – Pioneers of the HK Plumbing Industry 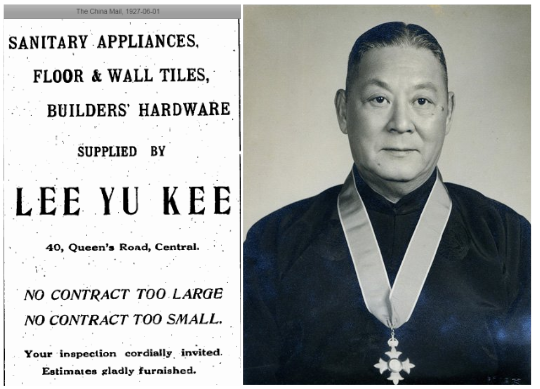 Plumbing is a specialized and lucrative segment of the HK construction industry and this article profiles three of the pioneering firms who were leaders in the plumbing business – Lee Yu Kee, Kitson and Tung On and the stories of the families behind them.

Founded in 1896, Lee Yu Kee is one of the oldest and largest plumbing firms in Hong Kong with such dominance in the business that its second-generation proprietor Lee Iu-cheung (李耀祥, 1896-1976) earned the title of the “Toilet King”.

The firm was founded in HK by Lee Iu-cheung’s father Lee PuiKee (李培基) as Lee Kee& Co (李基號), a building contractor which was involved in bricks and tiles at 21 Wellington Street. A native of Chungshan in Guangdong province, Iu-cheung’s grandfather Lee Yan-wing (李仁榮) was already in the construction business specializing in scaffolding in Guangdong.  As a teenager, Lee Iu-cheung participated in the 1911 revolution in Guangdong province but instead of joining the military, he entered the faculty of engineering at the newly established University of Hong Kong in 1913 and became one of its first graduates in 1917. For the next six decades, he maintained close ties with the university, having worked there as a part time lecturer in hydraulic engineering, helped rebuild the engineering department after the war, served as a life member of the court and vice president of the HKU Alumni Association and received an honorary LLD from the school in 1969. Concerned about floods in Guangdong province, he pursued further studies in river conservancy and sanitary engineering at Cornell University in the US in 1919. But within a year, his father passed away and he was forced to abandon his studies and returned to HK to take over the family business. Leveraging his expertise in sanitary engineering, he renamed the business Lee Yu Kee in the 1920s which he turned into a leading manufacturer of drainage pipes, sanitary appliances and other building and plumbing supplies in HK. Lee Yu Kee also had branches in the mainland in Canton, Fatshan, Swatow and Kunming before 1949 and was formally incorporated in HK in 1959 with offices at the United Chinese Bank Building at 37 Des Voeux Road Central.

Outside of business and HKU, Lee Iu-cheung was involved with over 50 nonprofit organizations such as the Po Leung Kuk (he was director in1929),Pok Oi Hospital, HK Anti-Tuberculosis Association, Lok Sin Tong, Chinese General Chamber of Commerce, St. John’s Ambulance Brigade and Kowloon City Kaifong Welfare Association. He was involved with the Tung Wah Group of Hospitals for half a century, starting with his election as director of KwongWah Hospital in 1926, becomingchairman of the Tung Wah Group of Hospitals in 1940 and serving as advisor afterwards. He also served on many government committees. For his community service, he was appointed justice of the peace in 1941 and awarded MBE in 1949, OBE in 1952, the Queen’s Coronation Medal in 1954 and CBE in 1958.

Outside of his many business and community endeavors, Lee Iu-cheung devoted lots of time and resources into developing his private villa known as Dragon Garden (龍圃) at 32-42 Castle Peak Road in Tsing Lung Tau, Tsuen Wan. He originally acquired the 2.6 hectares plot back in 1948 from the government and over the next two decades, developed a complex of ornately decorated Chinese buildings and elaborate gardensmodeled after Chinese palaces and designed by Chu Pin, the co-founder of the architectural design firm of Kwan, Chu & Yang.Scenes from the James Bond movie Man with the Golden Gun and Bruce Lee picture Enter the Dragon were shot in Dragon Garden and for the first movie, Lee asked the US film production company to donate HK$24000 to Tung Wah for the use of the premise.

Lee Iu-cheung died in August 1976 and was buried in Dragon Garden. He was survived by his wife Chan Yuet-king (daughter of Tung Wah director Chan Wan-sau) and their 5 sons and 2 daughters. He was succeeded at Lee Yu Kee by his second son Dr. Lee Ming (李明) who joined the business in the late 1940s after receiving his B.S. from MIT (1943), M.S. from Harvard (1944) and Ph.D from University of Illinois (1947).Ming was a member of the American Society of Civil Engineers and lectured at HKU on hydro-engineering like his father. Ming’s wife Maria Lee (Tseng Chiu-kwan, 李曾超群), the “Queen of Cakes”, is perhaps the best-known member of the family as the founder of the Maria’s bakery chain. As for Iu-cheung’s other children – the eldest son Lee Po (李寶) managed Globe Trading and was a business graduate from Boston University and director of Po Leung Kuk (1949); the third son Lee Chun (李循, 1925-2017) studied ceramics at the University of Illinois and founded King Sing Ceramics Factory (竟成瓷廠) and Kowloon Mining Development (九龍礦務, incorporated in 1957, renamed Multi-Loyal in 1975); the third son Lee Him (李謙) like his older brother studied business at Boston University and served as director of various family-owned firms. The fifth son Lee Shiu (李韶) received his B.S. in chemistry from UC Berkeley and M.S. and Ph.D. in chemistry from Yale, taught chemistry in the US and Hong Kong and also worked for Du Pont in the US. The eldest daughter Lee Kit-yiu (李潔瑤) was a graduate of the New England Conservatory of Music and was a director of Po Leung Kuk in 1967. The second daughter Lee Kit-kwan graduated from Mills College and received her M.Ed. from Columbia University, where her husband Wong Wing-yuet (黃榮越) also earned his engineering degree.

Article about Lee Yu Kee winning the plumbing contract for Mei Foo Sun Tsuen in 1967. Lee Ming is third from the left with representatives of Mei Foo Investments, the developer of the housing estate (KSDN, 1967-8-21)

Under Lee Ming’s management, Lee Yu Kee continued to win many major plumbing works including the contract for the construction of Mei Foo Sun Tsuen and represented foreign brands such as Iplex plastic pipes from Australia, F.E. Myers pumps & pipes from the US and Richards Tiles from the UK. In 1986, Lee Ming decided to retire and sold Lee Yu Kee to the Malaysian conglomerate Sime Darby which also owns Harpers and China Engineers (see articles).As a Sime Darby subsidiary, Lee Yu Kee kept its name and continued to grow and since 1986 has been responsible for the maintenance for most of the pumping stations and sewage treatment works for most of the housing estates operated by the HK Housing Authority. In 2006, Lee Shiu acquired Dragon Garden for HK$130 million from the other family members and donated it to the HK government to prevent the property which his father worked so hard on from being re-developed.

Kitson & Co was another major player in the plumbing industry and its founderPun Yau-hung (潘友雄) was a native of Nanhai and a Senior Morrison Scholar at Queen’s College in HK. Like Lee Iu-cheung of Lee Yu Kee, Pun was one of the first engineering graduates from HKU in 1919 and in fact according to the 1941 HK Jurors List, he also worked for Lee Yu Kee before the War. However, also like Lee, Pun’s initial interest was to control floods and first worked as the principal Chinese engineer for the construction of the river gates at Lubao in San Sui (蘆苞水閘) in Guangdong (1919-1925) alongside American and European experts before returning to HK.

Pun started Kitson & Co sometime after the War in Wanchai as a competitor to Lee Yu Kee in the sanitary and heating business as engineers and distributor and installer of foreign brands, although as a firm Kitson & Co Ltd (潔新洋磁潔具) was incorporated in 1955. He also founded Kin Hing Construction (建興建築) as a building contractor.Kitson& Co Ltd was dissolved in 1965 and appeared to have been succeeded by Kitson& Siu Co Ltd (潔新工程) which was incorporated in 1963 by Pun Yau-hung and Siu Nai-kwan (Stephen, 1921-2018), who according to a 1949 directory also worked for Lee Yu Kee. As a firm, Kitson& Siu was dissolved in 1971.

Outside of his business, Pun Yau-hung was a director of the Tung Wah Group of Hospitals in 1958 and served on the board of the HKBCA during the 1950s for which he also served as director of education. PunYau-hung’s son Pun Yin-keung (潘演强) studied at Pui Ching Middle School in HK and graduated from Lingnan University in Canton with a B.S. civil engineering. He furthered his studies at the University of London for 6 years and received his license as a structural engineer. In 1955, he returned to HK to work for the architect IuTak-lam before starting his own architectural practice and served as manager of Kin Hing Construction. In 1964, Pun Yin-keung incorporated Chiu Keung Investment (昭強置業) to engage in property development although the firm was dissolved in 1980.

Pun Yau-hung, his daughters Veronica Pun Siu-fun (蔡潘少芬, B.A. 1953) and Judith Pun Siu-yuk (潘少玉, B.A. 1957) and his daughter in law Miu Yee-kwan (繆綺君) were all graduates of HKU so after he died his son established the Pun Yau-hung Bursaries at HKU in his memory to support civil engineering students. Pun Siu-fun, who is married to surgeon Dr. Peter W.S. Choy (蔡惠鏇), was appointed JP in 1972 and awarded MBE for her community service working with groups such as the HK Family Welfare Society (香港家庭福利會).

Left: HKBCA Yearbook in 1954; right: Raymond Lee Chow-Lam (right) at the ceremony for gifting of equipment for student training with Sung Sing-Zak, principal of HK Technical College in 1966 (WKYP, 1966-1-6)

Tung On Plumbing was another major player in the plumbing business operated out of 38 Lockhart Road in Wanchai. Raymond Lee Chow-lam (李秋霖), the proprietor of Tung On in the 1950s and 1960s was born in HK in 1912, He attended Wah Yan College and had 2 sons and 2 daughters. He served as chairman of the HK & Kowloon Plumbing and Sanitaryware Trade Employers Association and was involved with the Association of Siulamese in HK (欖鎮同鄉會).

According to the ad above, projects which Tung On was involved in during the 1950s included Embassy Court on Hysan Avenue in Causeway Bay, Shung Ming Mansion at 114-116 Boundary Street in Kowloon, the Miramar Hotel in Tsim Sha Tsui, the Chater Hall civil servants quarters at 1 Conduit Road (formerly Sir Paul Chater’s Marble Hall residence), the current campus of Wah Yan College (Raymond Lee’s alma mater) on Waterloo Road (opened in 1952) and the Duchess of Kent Hospital.

Article about Tung On winning the plumbing contract for Phase I of Mei Foo Sun Tsuen. Tung On managing director Ho Sang (center) with the sales manager (right) and engineering manager of the Mei Foo development project. (KSDN, 1967-8-26)

By the 1960s, the firm’s managing director was Ho Sang (何生) and like Lee Yu Kee, Tung On was also awarded a contract for Mei Foo Sun Tsuen in 1967 and worked on many Housing Authority projects. As a firm, Tung On Plumbing was incorporated in 1948 and dissolved in 2018.

This article was first posted on 25th February 2019.