Mary Anne Le Bas has sent an SCMP article, Six home-grown Hong Kong trades at risk of dying out, published on 21st June 2015. The fifth of these is a product that has been around for around 200 years. The company was founded by current manager Yuen Yee Lum’s great-great-grandfather in Guangzhou, in 1835. Mr Yuen believes his is the last company making tea this way in Hong Kong, and he thinks in China, too. 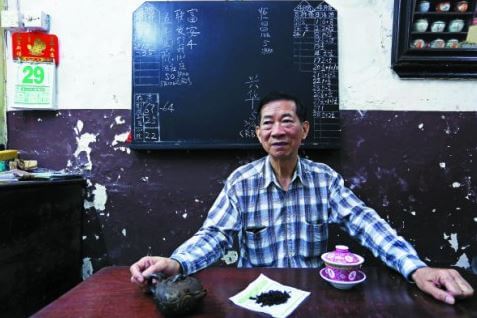 The article begins: Up until the 70s, “drink a little box of tea” was a common saying in Hong Kong. Yuen Yee-lum manages Yuen Kut Lam, the family company that produces Kam Wo tea, a medicinal herbal blend that has been made to the same recipe for nearly 200 years. Cold and flu sufferers are advised to drink two little boxes of tea a day, at a very hot temperature, until they recover. It can also be drunk in smaller quantities to boost digestion and maintain good health.

“My great-great-grandfather founded the company in Guangzhou, in 1835, during the Daoguang period of the Qing dynasty. His family had become rich running a paints and chemicals business. In Chinese culture, wealthy people are expected to give back by doing something to benefit society. One of his sons was interested in Chinese medicine, and he invented the tea.

“At that time, low-income people frequently died from their illnesses because they couldn’t afford to visit a doctor. My ancestors sold the tea at a cheap price so even poor people could buy it. When there was an outbreak of flu, or other diseases, they distributed it in local towns and villages.

“In 1906 they moved to Hong Kong and opened our store in Sheung Wan.”

“We blend 28 herbs to make the tea. The recipe and the production techniques have been passed down the generations. We cook the herbs to extract the juice and then dry them in the sun. We repeat the process nine times, so it takes at least nine days. This is what gives the tea its special qualities and we keep certain aspects of the process secret.

“We’re the last company making tea this way in Hong Kong, and I think in China, too…”