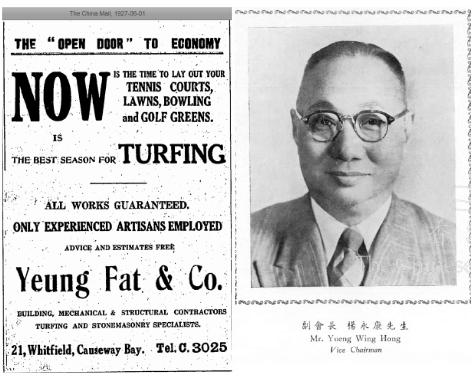 From the late 19th century through the 1960s, Yeung Fat & Co was a major building contractor in Hong Kong which also specialized in turfing (for tennis courts, bowling lawns and golf greens as shown in above ad from 1927) and stone masonry.

Yeung Fat (楊發利, or Yeung Fat-lee, 1856-1938), the founder of Yeung Fat & Co, was also known as Yeung Ping-yuen (楊秉元) and like many early Chinese building contractors in HK was of Hakka descent and was born into a poor family in Wuhua county in the Meizhou prefecture in Guangdong. After a few years of formal education, Yeung Fat apprenticed as a blacksmith in his hometown but not making enough money to support his family, he walked to Hong Kong with four coins in his pocket. Following his fellow Hakka natives, he went into the construction business and became a stone mason and construction worker. Through being street smart and hard work, he eventually saved enough to start Yeung Fat & Co which became a major contractor to the Hong Kong government, working on projects ranging from roads, barracks, drainage, cemeteries, race tracks, reservoirs (it was involved in the construction of the Tai Tam Tuk dam in the 1910s) and fire stations, both construction and demolition.

The specific projects Yeung Fat was involved in can be found in various government reports on public works and tender bids in the 1920s and 1930s. In 1929, Yeung Fat won the tender for a new cookhouse and quarters at the Victoria Gaol for $3395 and for the supply of headstones for the government cemetery at $21.50 per 100. The next year, it won tender for supply of labor and materials for Chinese cemeteries in HK and Kowloon.

In 1933, Yeung Fat was responsible for the demolition of Beaconsfield Arcade (built in 1880 by Jewish merchant E.R. Belilios and named after British prime minister Benjamin Disraeli who was the first Earl of Beaconsfield), which commenced in June and completed early in August. A credit of $3,500 was received by the government from Yeung Fat for the old materials in this project and the site was later turned into Beaconsfield House before being demolished alongside neighboring HK Hilton to make way for Cheung Kong Center. In 1938, Yeung Fat & Co won tender for the maintenance and repair of roads and in 1939, it was added to the list of licensed plumbers. 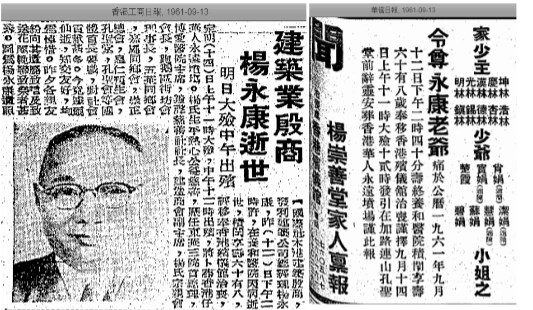 Yeung Fat was succeeded by his eldest son Yeung Wing-hong (楊永康, 1893/1896-1961), who graduated from Queen’s College in HK (Wing-hong’s son Ming-lam was also a graduate) and according to one source had also studied architecture at Cambridge University in the UK (this needs to be verified). In the 1920s, the office address of Yeung Fat & Co was listed as 21 Whitfield in Causeway Bay but by the 1940s and 1950s, the firm had relocated to the National Bank Building (aka Kwok Man House) in Central.

Yeung Wing-hong was assisted by Yeung Wing-kwai (楊永貴, aka Yeung Siu-wai or David Young, 1910-1975) and Yeung Wing-sing who managed the HK and Kowloon branches of the firm respectively as assistant managers. Also supporting him were Kaan Se-wan, the secretary of the firm and Mrs. M.P. Gardner, his private secretary.

Outside of work, Yeung Wing-hong was extremely active with community affairs, having served as lead director of the Tung Wah Group of Hospitals, chairman of the Pok Oi Hospital, president of the Chung Sing Benevolent Society and the Happy Valley Kaifong Welfare Advancement Association (his residence was 75A Wongneichong Road), vice chairman of the HKBCA and head of the Confucius Hall, Yeung’s Clansmen Association and various Hakka organizations. As a result, after he died in the HK Sanatorium in September 1961, 13 different organizations held a joint memorial service for him. According to his obituary, he was survived by 10 sons and 7 daughters.

After Wing-hong’s death, he was succeeded by his younger brother Wing-kwai (both of them were owners of racehorses, Yeung Wing-hong being the owner of “Sunshine” which the jockey Tang Man-wa rode in 1948 when he was killed). In the 1960s, the firm’s office relocated to South East Building at 475-477 Hennessy Road but it was no longer a leading construction firm in Hong Kong. In January 1975, Yeung Wing-kwai collapsed and died of a heart attack in his bathtub in his residence in Happy Valley and was survived by 4 sons and 2 daughters. As a firm, Yeung Fat & Co was never incorporated. In the 1980s, a dispute arose between HK & Overseas Development Co Ltd and “Yeung Fat Construction Co” (also not incorporated) over the construction quality of 11 town houses at Mt Austin Road in the Peak which the earlier hired the latter to build. One of the principals of Yeung Fat Construction was Norman Yeung Ching-lam, likely a third-generation member of the Yeung family of Yeung Fat & Co.