HF: If you visit Yau Ma Tei Wholesale Fruit Market during the day you may well think it’s closed, ready to be fenced off and facing imminent demoliton. However, piled boxes of fruit on the surrounding streets and inside locked wire cages within indicate there’s life in the old place yet.

If you want to see the market fully functioning you need to come in the very early hours of the morning.

Many thanks to Jennifer Lang for sending three photos of the market she took on a rainy day in January 2016.

Historical Interest Yau Ma Tei Wholesale Fruit Market (油麻地果欄) was built in 1913. The name of this market was originally Government Vegetables Market (政府蔬菜 市場) which sold fruit and vegetables. Fish traders joined in the 1930s. With the opening of Cheung Sha Wan Vegetables Wholesaling Market (長沙灣蔬菜批發 市場) and Cheung Sha Wan Fishery Wholesaling Market (長沙灣魚類批發市 場) in 1965, the vegetables and fish stalls moved out. From then on the market has operated as a specialist fruit wholesaling market.

Architectural Merit Yau Ma Tei Wholesale Fruit Market consists of a rectangular site packed with market stalls and shophouses, one and two stories high. Originally the upper floors were living accommodation but now most upper floors are used for storage and rest rooms. They are largely built of brick or stone with covered pedestrian walkways or arcades formed by projecting balconies of upper floors. 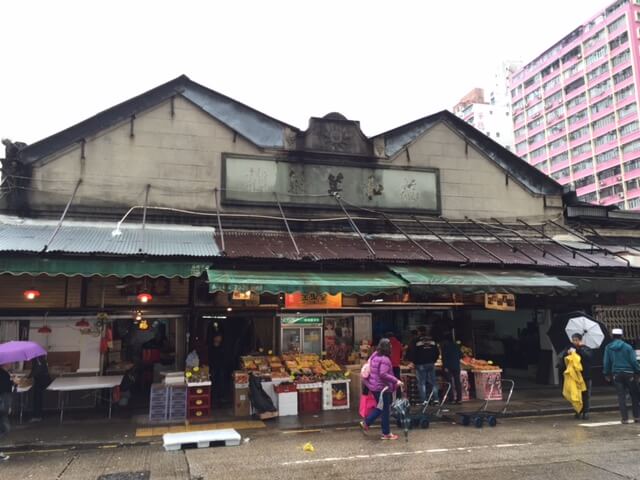 The most distinctive feature of the Market is the unusual use of Dutch Colonial gables and pediments, and the carvings of traders’ brand names on pediments or tablets of the gables. In spite of their similarity in structural material, width of shop front and storey height, they formed a symbol and characteristic of the Market. Along Reclamation Street, the pair of gable walls of the ‘福和菓菜欄’ have pediments carved with a symbol of the sun in the middle. The ‘秀和欄’ at the corner of Waterloo Road and Reclamation Street has a stylish gable wall and a pediment. The gable wall facing Waterloo Road is in angular wave pattern with minor geometric line carvings; while the arching pediment facing Reclamation Street is decorated with short columns on two sides and ball crests. Along Waterloo Road, the gable walls of ‘和豐欄’ and ‘三 喜欄’ are also quite interesting. 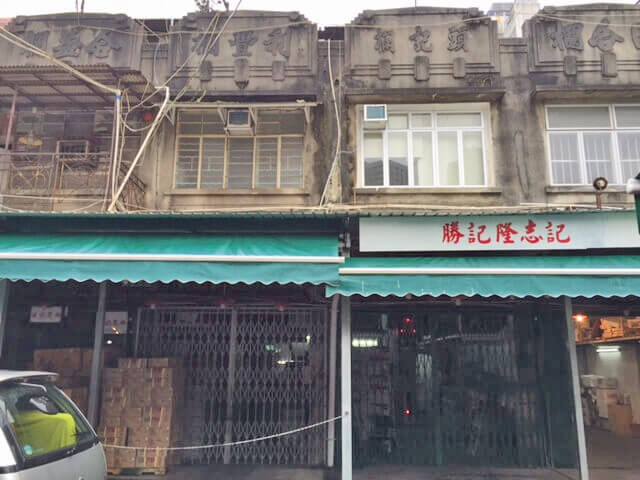 Rarity, Built Heritage Value & Authenticity Although it is apparent that many alterations and additions have been made over the years, most of the buildings retain their authenticity.

Social Value & Local Interest In the early days, Yau Ma Tei was a small Chinese community and most of the daily activities centred around the Tin Hau Temple. The Fruit Market played an important role in the development of the district and fostered the growth of Yau Ma Tei as a commercial centre during the early development of Kowloon. It therefore has great historical social value and local interest as well as group value due to other historic buildings nearby. 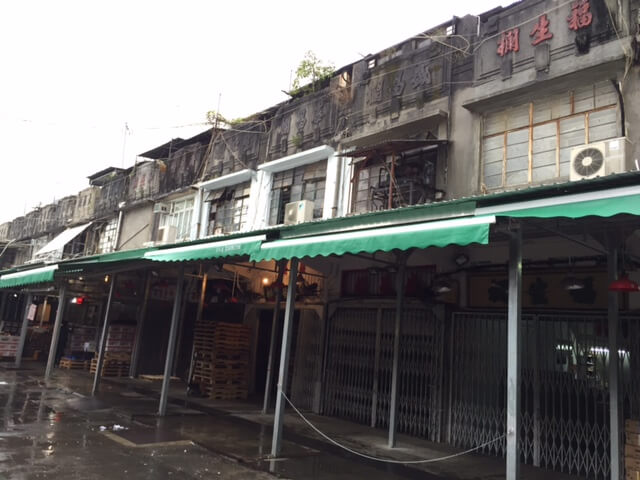 Group Value Yau Ma Tei Wholesale Fruit Market is important as an integral component of a significant architectural and historical complex. The Yau Ma Tei Theatre (油麻地戲院) built around 1925 is found opposite to the Market. Another one is the Former Pumping Station of the Water Supplies Department (舊水務署抽 水站) built in 1895 featuring a red-brick façade and chimney. Other important buildings in the bustling Yau Ma Tei district include and the Tung Wah Museum (東華三院文物館), the Yau Ma Tei Police Station (油麻地警署) and the Yau Ma Tei Tin Hau Temple (天后古廟).

Adaptive Re-use Built in 1913, the Fruit Market is now probably well below current design standards. Should it be relocated to more modern premises the old buildings with their distinctive architectural appearance should be put to an appropriate adaptive re-use to benefit the district.

* Chris Yuen has sent this link to a book to commerate the 100th anniversary of Yau Ma Tei Fruit Market published in 2013 by the Kowloon Fruit & Vegetable Merchants Association.