HF: These paintings and photos of Hong Kong soon after the end of the War are from the Imperial War Museum’s, (IWM) UK extensive collection of Hong Kong. I have selected them because they show some aspect of the industrial history of HK at this time. Either through the Naval Dockyard, Shipping wrecks in the Harbour (with close connections to post-war ship breaking) and the Kowloon – Canton railway.

Further information regarding the people mentioned below would be welcomed.

The captions have been added by the IWM.

The paintings  are by Leonard Rosoman who was appointed in April 1945, by the War Artists’ Advisory Committee,  to a full-time salaried position to document the activities of the British Pacific Fleet.

All images are copyright of the Imperial War Museum, UK (IWM) www.iwm.org.uk but can be published by IWM’s Non-Commercial Licence. 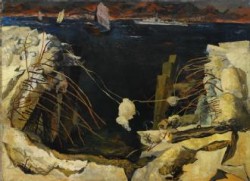 A Crater in the Naval Dockyard, Hong Kong
Painting by: Rosoman, Leonard Henry (RA) 1945
A view looking down into a hole in the dockside. The damage has exposed the wooden structure underneath and the metal cables within the concrete. © IWM 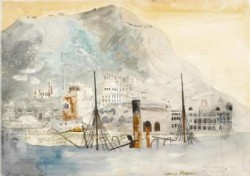 A Chinese Merchantman sunk in Hong Kong Harbour
Painting by: Rosoman, Leonard Henry (RA) 1945-09-17
The funnel and two masts of a sunken vessel rise up out of the water. © IWM

A film on the IWM website indicates that the railway from Kowloon to Lo Wu re-opened on 29 Sep 1945. (Film made by the Air Ministry Directorate of Public Relations) 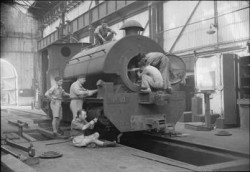 Royal Air Force personnel work to repair an engine for the Kowloon Railway, Hong Kong. This railway was immobilised during the Japanese occupation, services were restored under Royal Air Force supervision after the liberation.
photo by RAF official photographer © IWM 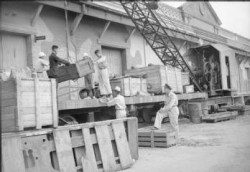 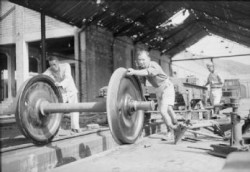 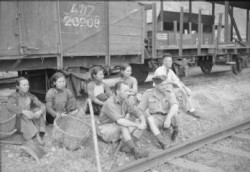 Corporal J Masterton and Leading Aircraftman L Moulden pause with a group of Chinese women carriage cleaners to watch a newly repaired engine of the Kowloon Railway on a test run in Hong Kong.
photo by RAF official photographer © IWM 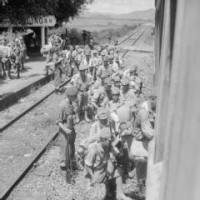 Japanese soldiers who were rounded up in the Fan Ling district of Hong Kong by men of the 3rd Commando Brigade are put aboard a train bound for Kowloon.
photo by No 9 Army Film & Photographic Unit © IWM

This article was first posted on 4th January 2014.

Our Index has a large number of articles about Industry during World War Two particularly during the Japanese occupation including: