Wong Tong Kee (黃棠記) – the Timber Merchant and the Mansion 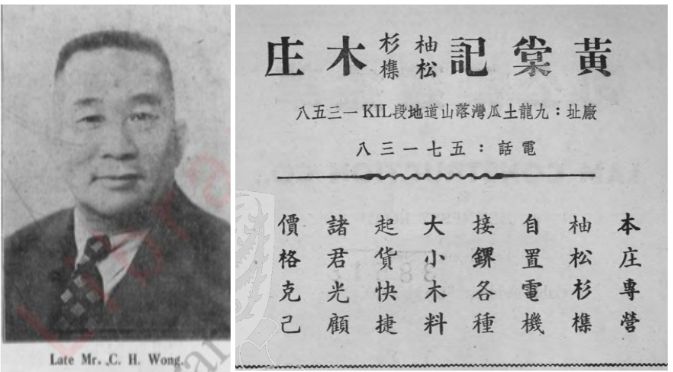 In the first half of the 20th century, Wong Tong Kee was one of the major players in the lumber and construction business in Hong Kong and conducted business not only locally but at a national level.

A native of Shunde in Guangdong province, Wong Tong Kee’s founder Wong Cheuk-hing (黃卓卿 1877-1940) started working as a boy in Hong Kong at the Kowloon Godown & Wharf. He worked for Kowloon Wharf for many years and entered the lumber business when the European manager of a lumber firm needed to help to find buyers for a lot of lumber which Wong managed to sell within a short period of time. Wong Tong Kee quickly emerged as one of the leading timber merchants in HK and a key supplier to the local construction industry.

By the 1910s, Wong Tong Kee was already a major force in the lumber and construction industries in Hong Kong as evidenced by the fact that C.H. Wong co-founded the Lumber Merchants Association (集木行商會) in 1916 with Lam Kau-mow, the brother of Lam Woo, Ng Jim-kai (see article) and a dozen others and the HK Building Contractors Association in 1920 with Tam Shiu-hong, Choi Po-tin (see articles) and 15 others.

Over time, Wong Tong Kee expanded to nine saw mills in Hong Kong, Canton and Macau which supplied lumber to construction projects at a national level. According to the bio of Wong in A Century of Commerce (百年商業) published in 1941, projects which Wong Tong Kee was involved in included the Summer Palace in Peking, railroads of various provinces, the Canton-Hankow Railway and the Kowloon Canton Railway, the Pearl River Bridge in Canton, various docks and piers of his old employer Kowloon Wharf and China Merchants Navigation, buildings of the HK Public Works Department and edifice of the HSBC building. In the 1923 Xianggang Yinghua Renminglu and the 1925 Comacrib Directory, Wong Tong Kee’s HK address was listed as 32 Canton Road in Tsim Sha Tsui.

Outside of work, Wong was a generous philanthropist who had served as chairman of the Kwong Wah Hospital in Kowloon in 1916-1917 and served on the board of the Tsim Sha Tsui Kaifong School and the inaugural board of Tak Ming Secondary School (founded on Sai Yee Street in Mongkok in 1934 by General Chen Chi-tang, see articles on Union Metal Works). He also sponsored the C.H. Wong School in Tsim Sha Tsui.  On August 26, 1940, Wong Cheuk-hing died in his HK residence at the age of 64. He was succeeded by his eldest son Charles Hok-sun Wong (黃學新), who was previously manager of Wong Tong Kee’s Canton branch before moving back to HK in 1938 when the Japanese occupied Canton. During his tenure in Canton, Charles built a successful book of business as he befriended public works and railway officials of the Canton government and outside of work in HK, he was a director of the Kwong Wah Hospital and Tung Wah Hospital. 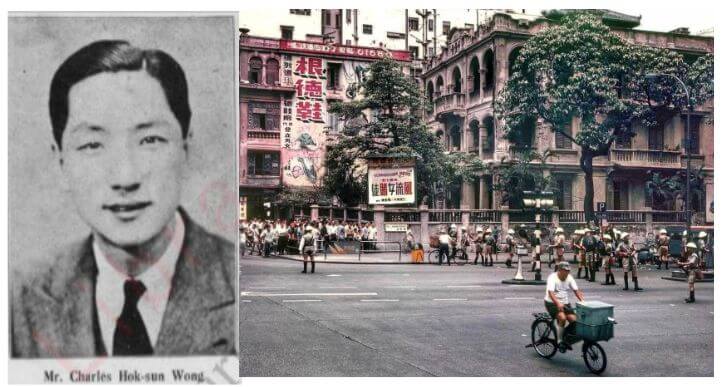 In the 1948 HK Telephone Directory, Wong Tong Kee’s address was listed as 418 Portland Street while its saw mill was located in To Kwa Wan. In the 1950s, Wong Tong Kee was still active in the HK construction business and its advertisement listed its site as Kowloon Inland Lot 1358 in To Kwa Wan where it specialized in wood such as teak, fir, pine and the yard was equipped with electric saws which could cut lumber of various sizes for different types of projects in a timely manner.  In the HKBCA directory, Wong Sai-chuen (黃世銓) was listed as a contact for Wong Tong Kee but it is unclear what his relation was to Wong Cheuk-hing. By the 1960s, not much info is available about Wong Tong Kee the timber business but the name continued to be associated with the three story mansion at the junction of Nathan and Jordan Road, which was built in 1917 as evidenced by the number in its façade. The mansion was demolished in the mid-1970s and re-developed into the Champion Building which has been the home to the Yue Hwa Chinese Products emporium.

This article was first posted on 13th January 2020.